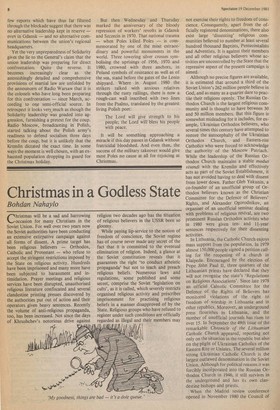 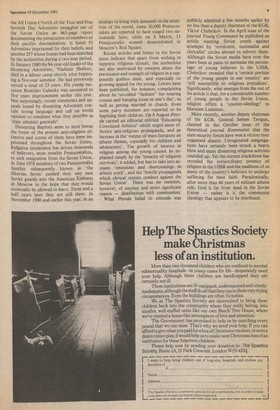 Christmas in a Godless State

CNhristmas will be a sad and harrowing ....occasion for many Christians in the Soviet Union. For well over two years now the Soviet authorities have been conducting an extensive extirpative campaign against all forms of dissent. A prime target has been religious believers — Orthodox, Catholic and Protestant — who refuse to accept the stringent restrictions imposed by the State on religious activity. Hundreds have been imprisoned and many more have been subjected to harassment and intimidation. Prayer meetings and religious services have been disrupted, unauthorised religious literature confiscated and several clandestine printing presses discovered by the authorities put out of action and their operators given heavy sentences. Recently the volume of anti-religious propaganda, too, has been increased. Not since the days of Khrushchev's notorious drive against religion two decades ago has the Situation of religious believers in the USSR been so gloomy.

While paying lip-service to the notion of freedom of conscience, the Soviet regime has of course never made any secret of the fact that it is committed to the eventual elimination of religion. Indeed, a glance at the Soviet constitution reveals that it guarantees the right 'to conduct atheistic propaganda' but not to teach and preach religious beliefs. Numerous laws and regulations, some published and some secret, comprise the Soviet 'legislation on cults', as it is called, which severely restricts organised religious activity and prescribes imprisonment for practising religious beliefs in a manner disapproved of by the State. Religious groups who have refused to register under such conditions are officially regarded as illegal and their members may not exercise their rights to freedom of conscience. Consequently, apart from the officially registered denominations, there also exist large 'dissenting' religious communities believed to number at least several hundred thousand Baptists, Pentecostalists and Adventists. It is against their members and all other religious believers whose activities are uncontrolled by the State that the repressive aspect of the present campaign is aimed.

Although no precise figures are available, it is estimated that around a third of the Soviet Union's 262 million people believe in God, and as many as a quarter dare to practiSe their religions openly. The Russian Orthodox Church is the largest religious community and is thought to have between 30 and 50 million members. But this figure is somewhat misleading for it includes, for example, Ukrainian Orthodox believers, who several times this century have attempted to restore the autocephalty of the Ukrainian Orthodox Church, and Eastern-rite Catholics who were forced to acknowledge the authority of the Moscow Patriach. While the leadership of the Russian Orthodox Church maintains a stable modus vivendi with the Kremlin and effectively acts as part of the Soviet Establishment, it has not avoided having to deal with dissent from lower down. Father Gleb Yakunin, a co-founder of an unofficial group of Orthodox believers known as the Christian Committee for the Defence of Believers' Rights, and Alexander Ogorodnikov, an organiser of an unofficial seminar dealing with problems of religious revival, are two prominent Russian Orthodox activists who in 1980 were given tenand 11-year sentences respectively for their dissenting activities.

In Lithuania, the Catholic Church enjoys mass support from the population. In 1979 almost 150,000 people signed a petition calling for the reopening of a church in Klaipeda. Encouraged by the election of Pope John Paul II, three quarters of the Lithuanian priests have declared that they will not recognise the state's 'Regulations on Religious Associations'. Since late 1978 an official Cahtolic Committee for the Defence of the Rights of Believers has monitored violations of the right to freedom of worship in Lithuania and in other republics. Moreover, an underground press flourishes in Lithuania, and the number of unofficial journals has risen to over 15. In September the 49th issue of the remarkable Chronicle of the Lithuanian Catholic Church appeared, reporting not only on the situation in the republic but also on the plight of Ukrainian Catholics of the Eastern Rite or Uniates. The several million strong Ukrainian Catholic Church is the largest outlawed denomination in the Soviet Union. Although for political reasons it was forcibly incosrporated into the Russian Orthodox Church in 1946, it still survives in the underground and has its own clandestine bishops and priests.

the All Union Church of the True and Free Seventh Day Adventists smuggled out of the Soviet Union an 863-page report documenting the persecution of members of their pacifist denomination. It listed 55 Adventists imprisoned for their beliefs, and another 257 whose homes had been searched by the authorities during a two-year period. In January 1980 the 84-year-old leader of the dissenting Adventists, Vladimir Shelkov, died in a labour camp shortly after beginning a five-year sentence. He had previously served a total of 23 years. His young successor Rostislav Galetsky was sentenced to five years imprisonment earlier this year. Not surprisingly, recent statements and appeals issued by dissenting Adventists contain strong language and call on world Opinion to condemn what they describe as 'state atheistic genocide'.

Dissenting Baptists seem to have borne the brunt of the present anti-religious offensive and scores of them have been imprisoned throughout the Soviet Union. Religious intolerance has driven thousands of believers, most notably Pentecostalists, to seek emigration from the Soviet Union.. In June 1978 members of two Pentecostalist families subsequently known as 'the Siberian Seven' pushed their way past Soviet guards into the American Embassy in Moscow in the hope that they would eventually be allowed to leave. Three and a half years later they are still there. In November 1980 and earlier this year, in an attempt to bring their demands to the attention of the world, some 30,000 Pentecostalists are reported to have staged two nationwide fasts, while on 8 March, 11 Pentecostalist women demonstrated in Moscow's Red Square.

Recent articles and letters in the Soviet press indicate that apart from wishing to suppress religious dissent, the authorities are also motivated by concern about the persistence and strength of religion in a supposedly godless state, and especially its growing appeal for the young. Letters have been published, for instance, complaining about he 'so-called "fashion" for wearing crosses and hanging icons in one's flat', as well as getting married in church. Even some party members are reported to be baptising their children. On 8 August Pravda carried an editorial entitled 'Educating Convinced Atheists' which urged more effective anti-religious propaganda, and an increase in the 'output of mass literature on atheist themes, especially for children and adolescents'. The growth of interest in religion among the young cannot be explained simply by the 'tenacity of religious survivals', it added, but has to take into account 'omissions and shortcomings in atheist work', and the 'hostile propaganda which clerical centres conduct against the Soviet Union'. There was no mention, however, of another and more significant reason — disaffection with communism.

What Pravda failed to concede was publicly admitted a few months earlier by no less than a deputy chairman of the KGB, Viktor Chebrikov. In the April issue of the journal Young Communist he published an article warning Soviet youth against attempts by 'revisionist, nationalist and clericalist' circles abroad to subvert them. Although the Soviet media have over the years been at pains to minimise the percentage of young believers in the USSR, Chebrikov revealed that a 'certain portion of the young people in our country' are 'still susceptible to religious prejudices'. Significantly, what emerges from the rest of his article is that, for a considerable number of young people in the Soviet Union, religion offers a 'counter-ideology' to Marxism-Leninism.

More recently, another deputy chairman of the KGB, General Semen Tsvigun, claimed in the October issue of the theoretical journal Kommunist that the state security forces have won a victory over organised dissent. Unregistered congregations have certainly been struck a heavy blow and many dissenting religious activists rounded up. Yet the current crackdown has revealed the extraordinary potency of religion in the USSR and the readiness of so many of the country's believers to undergo suffering for their faith. Paradoxically, after more than 60 years of militant atheist rule, God is far from dead in the Soviet Union — rather is it the communist ideology that appears to be moribund.