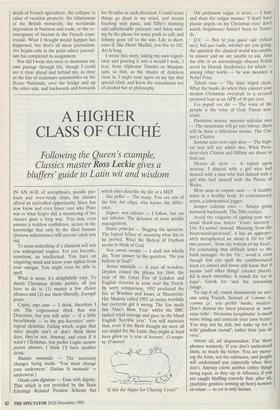 A HIGHER CLASS OF CLICHÉ

IN AN AGE of astrophysics, poodle par- lours and oven-ready chips, the classics afford an unrivalled opportunity. Since few now know and even fewer care who Plato was or what Scipio did, a smattering of the classics goes a long way. You may even assume a reckless confidence, secure in the knowledge that only by the illest fortune (fortuna nefastissima) will anyone catch you out.

To seem something of a classicist will win you widespread respect. For you become, somehow, an intellectual. You have an enquiring mind and know your alphas from your omegas. You might even be able to spell.

What is more, it's delightfully easy. To dazzle Christmas drinks parties, all you have to do is: (1) master a few choice phrases and (2) use them liberally. Exempli gratia: Cogito, ago sum — I think, therefore I am. The cognoscenti think that was Descartes, but you will refer — if a little breathlessly — to the pre-Socratics' onto- logical elenchus. Failing which, argue that since people can't or don't think these days, they're not. Anyway, and even if it wasn't Christmas, you prefer Cogito sumere potum alterum, I think I'll have another drink.

which does describe the life of a MEP.

Hoi polloi — The many. You are one of the few, hoi oligoi, who knows the differ- ence.

Sequor, non inferior — I follow, but am not inferior. The delusion of most middle management.

Petitio principii — Begging the question. The logical fallacy of assuming what has to be proved. What the Bishop of Durham seems to think of God.

Non omnis moriar — I shall not wholly die. Your answer to the question, 'Do you believe in God?'

Annus mirabilis — A year of wonders. Dryden coined the phrase for 1666, the year of the Great Fire of London and English victories in arms over the Dutch. By sorry comparison, 1992 produced the fire at Windsor and losses at Maastricht. Her Majesty called 1992 an annus hornbills but everyone got it wrong. The Sun made this 'One's Bum Year' whilst the BBC lacked royal courage and gave us the bland English 'horrible year'. You will maintain that, even if the Beeb thought we were all too stupid for the Latin, they might at least have given us 'a year of horrors'. 0 tempo- ra, 0 mores!

'Is this the hippo for Charing Cross?' Odi profanum vulgus et arceo — I hate and shun the vulgar masses. 'I don't have plastic angels on my Christmas tree/ don't watch Neighbours! haven't been to Tener- ife.'

Q.V. — Not to you quod vide (which see), but quo vadis, whither are you going, the question the classical world was unable to answer and we are unable to ask. Also the title of an astonishingly obscure Polish novel by Henryk Sienkiewicz for which — among other works — he was awarded a Nobel Prize.

Tabula rasa — The slate wiped clean. What the banks do when they convert your modest Christmas overdraft to a secured personal loan at an APR of 40 per cent.

Vox populi vox dei — The voice of the people is the voice of God. Patent non- sense.

Parturient montes, nascetur ridiculus mu.s — The mountains will go into labour, there will be born a ridiculous mouse. The Citi- zen's Charter.

Summa sedes non capit duos — The high- est seat will not admit two. What Presi- dent-elect Clinton and Hillary are about to find out.

Mens sana in corpore sano — A healthy mind in a healthy body. In contemporary terms, a lobotomised jogger.

Avoid the vulgarity of signing your sea- sonal thank-you letters 'Yours sincerely'. Use 'Ex animo' instead. Meaning 'from the heart/mind/spirit/soul', it has an appropri- ately metaphysical air about it. Or try `Ab imo pectore', 'from the bottom of my heart', for concluding that difficult letter to the bank manager. As for 'Etc.', avoid it, even though few can spell the unabbreviated form (et cetera) and fewer still know that it means 'and other things' (neuter plural). Ktl is much smoother. It stands for `kai ta loipa', Greek for 'and the remaining things'.

To cap it all, round dismissively on any- one using French. Instead of `comme ci, comme ca', you prefer `medio, modico'. Don't dismiss the latest plutocrat as 'nou- veau riche'. Wovissime locupletatus' is much more biting and conceals your envy better. You may not be rich, but make up for it with gaudium vivende, rather than 'joie de vivre'.

Above all, nil desperandum. Use these phrases wantonly. If you don't understand them, so much the better. You are pursu- ing the form, not the substance, and people will understand you especially when they don't. Anyway ceteris paribus (other things being equal, as they say in Albania), if you are caught bluffing concede that, after all, (partitive genitive coming up here) hominis est mare — to err is only human.