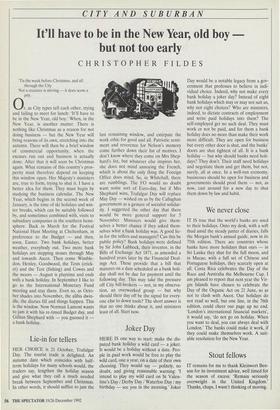 It'll have to be in the New Year, old boy but not too early

'Tis the week before Christmas, and all through the City Not a creature is stirring — it does seem a pity.

0 r, as City types tell each other, trying and failing to meet for lunch: 'It'll have to be in the New Year, old boy.' When, in the New Year, is another matter. There is nothing like Christmas as a reason for not doing business — but the New Year will bring reasons of its own, stretching into the autumn. There will then be a brief window of commercial opportunity, when the excuses run out and business is actually done. After that it will soon be Christmas again. What remains of this country's pros- perity must therefore depend on keeping this window open. Her Majesty's ministers are, true to form, trying to shut it. I have a better idea for them. They must begin by studying the business calendar. The New Year, which begins in the second week of January, is the time of ski holidays and win- ter breaks, which can be suitably followed by, and sometimes combined with, visits to subsidiary companies in the southern hemi- sphere. Back in March for the Festival National Hunt Meeting at Cheltenham, in preference to the Budget — and then, soon, Easter. Two bank holidays, better weather, everybody out. Two more bank holidays are stepping stones through May and towards Ascot. Then come Wimble- don, Henley, Goodwood, the Tests (crick- et) and the Test (fishing) and Cowes and the moors — August is playtime and ends with a bank holiday. In September 1 like to go to the International Monetary Fund meeting and stay there. Even so, as Octo- ber shades into November, the alibis dwin- dle, the diaries fill and things happen. This is the window. Now Norman Lamont wants to jam it with his re-timed Budget day, and Gillian Shephard with — you guessed it — a bank holiday.

HER CHOICE is 21 October, Trafalgar Day. The tourist trade is delighted. An autumn date which coincides with half- term holidays for many schools would, the traders say, lengthen the holiday season and give what they call a much needed break between September and Christmas. In other words, it should suffice to jam the last remaining window, and extirpate the work ethic for good and all. Patriotic senti- ment and reverence for Nelson's memory come further down their list of motives. I don't know where they come on Mrs Shep- hard's list, but whatever else inspires her, she does not mind annoying the French, which is about the only thing the Foreign Office does mind. So, in Whitehall, there are rumblings. The FO would no doubt want some sort of Euro-day, but if Mrs Shephard wins, Trafalgar Day will replace May Day — wished on us by the Callaghan government as a gesture of socialist solidar- ity. I suggested the other day that there would be more general support for 5 November. Ministers would give them- selves a better chance if they asked them- selves what a bank holiday was. A good lie- in for the tellers and managers? Can this be public policy? Bank holidays were defined by Sir John Lubbock, their inventor, in the Bills of Exchange Act 1871, as amended a hundred years later by the Financial Deal- ings Act. These provide that a bill that matures on a date scheduled as a bank holi- day shall not be due for payment until the following day. This may take the pressure off City bill-brokers — not, in my observa- tion, an overworked group — but why should their day off be the signal for every- one else to down tools? The short answer is that no one thinks about it, and ministers least of all. Start now.

HERE IS one way to start: make the dis- puted bank holiday a wild card — a joker. It would be a holiday without a date. Peo- ple in paid work would be free to play the wild card, one a year, on a date of their own choosing. They would say — politely, no doubt, and giving reasonable warning: 'I intend to play my wild card on St Valen- tine's Day / Derby Day / Waterloo Day / my birthday — see you in the morning.' Joker Day would be a notable legacy from a gov- ernment that professes to believe in indi- vidual choice. Indeed, why not make every bank holiday a joker day? Instead of eight bank holidays which may or may not suit us, why not eight choices? Who are ministers, indeed, to dictate contracts of employment and write paid holidays into them? The self-employed get no such deal. They must work or not be paid, and for them a bank holiday does no more than make their work more difficult. They are open for business but every other door is shut, and the banks' doors are shut tightest of all. It is a bank holiday — but why should banks need holi- days? They don't. Their staff need holidays and negotiate them and get them, but not, surely, all at once. In a well-run economy, businesses should be open for business and governments should prod them — not, as now, cast around for a new day to shut them down by law and habit.

IT IS true that the world's banks are used to their holidays. Onto my desk, with a soft thud amid the steady patter of diaries, falls the Morgan bank's annual guide, now in its 75th edition. There are countries whose banks have more holidays than ours — in Sri Lanka they shut for the full moon, and in Macao, with a full set of Chinese and Portuguese holidays, they scarcely open at all. Costa Rica celebrates the Day of the Race and Australia the Melbourne Cup. I am pleased to report that next year the Vir- gin Islands have chosen to celebrate the Day of the Organic Act on 21 June, so as not to clash with Ascot. Our holidays do not read so well, but one line, in the 76th edition, could cheer our page up no end. 'London's international financial markets', it would say, 'do not go on holiday. When you want to deal, you can always deal with London.' The banks could make it work, if they could make themselves work. A suit- able resolution for the New Year.

IT remains for me to thank Kleinwort Ben- son for its investment advice, well timed for the season of excess: 'Remain seriously overweight in the United Kingdom.' Thanks, chaps, I wasn't thinking of moving.