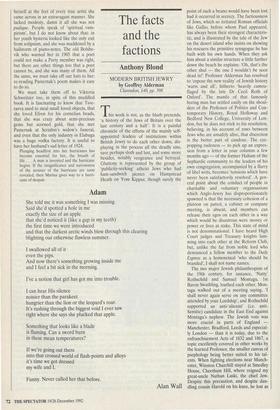 She told me it was something I was missing.

Said she'd spotted a hole in me exactly the size of an apple that she'd noticed it (like a gap in my teeth) the first time we were introduced and that the darkest arctic winds blew through this clearing blighting our otherwise flawless summer.

I swallowed all of it even the pips.

And now there's something growing inside me and I feel a bit sick in the morning.

I've a notion that girl has got me into trouble.

I can hear His silence noisier than the parakeet hungrier than the lion or the leopard's roar. It's rushing through the biggest void I ever saw right where she says she plucked that apple.

Something that looks like a blade is flaming. Can a sword burn in these mean temperatures?

If we're going out there into that crossed world of flash-points and alloys it's time we got dressed my wife and I.

Funny. Never called her that before.