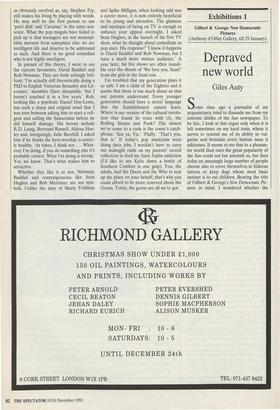 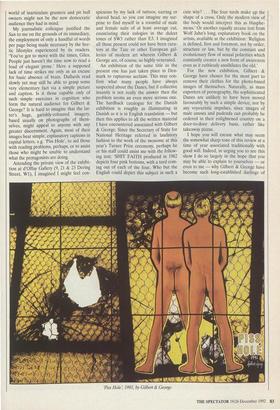 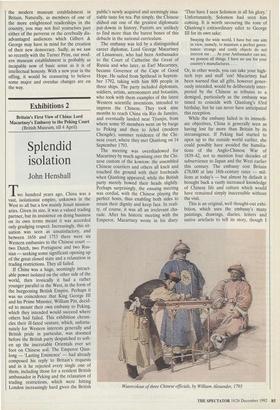 Some time ago a journalist of my acquaintance tried to dissuade me from my extreme dislike of the Sun newspaper. To be fair, I look at this organ only when it is left sometimes on my local train, where it serves to remind me of its ability to vul- garise and brutalise every human issue it addresses. It seems to me that in a pleasan- ter world than ours the great popularity of the Sun could not but astonish us, but then today an amazingly large number of people choose also to cover themselves in hideous tattoos or keep dogs whose most basic instinct is to eat children. Bearing the title of Gilbert & George's New Democratic Pic- tures in mind, I wondered whether the

world of inarticulate grunters and pit bull owners might not be the new democratic audience they had in mind.

My journalistic colleague justified the Sun to me on the grounds of its immediacy, the employment of only a handful of words per page being made necessary by the hec- tic lifestyles experienced by its readers. 'You've got to move with the times, Giles. People just haven't the time now to read a load of elegant prose.' Here a supposed lack of time strikes me only as an excuse for basic absence of brain. Dullards read slowly yet may still be able to grasp some very elementary fact via a simple picture and caption. Is it those capable only of such simple exercises in cognition who form the natural audience for Gilbert & George? It is hard to imagine that the lat- ter's huge, garishly-coloured imagery, based usually on photographs of them- selves, might appeal to anyone with any greater discernment. Again, most of their images bear simple, explanatory captions in capital letters, e.g. 'Piss Hole', to aid those with reading problems, perhaps, or to assist those who might be unable to understand what the protagonists are doing.

Attending the private view of the exhibi- tion at d'Offay Gallery (9, 21 & 23 Dering Street, W1), I imagined I might feel con- spicuous by my lack of tattoos, earring or shaved head, so you can imagine my sur- prise to find myself in a roomful of male and female suits of at least average cut, enunciating their eulogies in the dulcet tones of SW3 rather than E3. I imagined all those present could not have been cura- tors at the Tate or other European gal- leries of modern art wherein Gilbert & George are, of course, so highly venerated.

An exhibition of the same title as the present one has just taken place in Den- mark to rapturous acclaim. This may con- firm what many people have always suspected about the Danes, but if collective insanity is not really the answer then the problem seems an even more serious one. The hardback catalogue for the Danish exhibition is roughly as illuminating in Danish as it is in English translation — but then this applies to all the written material I have encountered associated with Gilbert & George. Since the Secretary of State for National Heritage referred in laudatory fashion to the work of the twosome at this year's Turner Prize ceremony, perhaps he or his staff could assist me with the follow- ing text: 'SHIT FAITH produced in 1982 depicts four pink bottoms, with a turd com- ing out of each of the four. Who but the English could depict this subject in such a cute way? . . . The four turds make 1,ip the shape of a cross. Only the modern view of the body would interpret this as blasphe- mous.' Or another equally arcane text from Wolf Jahn's long, explanatory book on the artists, available at the exhibition: 'Religion is defined, first and foremost, not by order, structure or law, but by the constant and evolutionary flow of sexual polarities which constantly creates a new form of awareness even as it ruthlessly annihilates the old.'

For the new exhibition, Gilbert & George have chosen for the most part to remove their clothes for the photo-based images of themselves. Naturally, as mass exporters of pornography, the sophisticated Danes are unlikely to have been moved favourably by such a simple device, nor by any voyeuristic impulses, since images of male anuses and pudenda can probably be ordered in their enlightened country on a door-to-door delivery basis, rather like takeaway pizzas.

I hope you will excuse what may seem the somewhat sharp tone of this review at a time of year associated traditionally with good will. Indeed, in urging you to see this show I do so largely in the hope that you may be able to explain to yourselves — or even to me — why Gilbert & George have become such long-established darlings of 'Piss Hole', 1991, by Gilbert & George the modern museum establishment in Britain. Naturally, as members of one of the more enlightened readerships in the country, you may not feel yourselves part either of the perverse or the cerebrally dis- advantaged audiences which Gilbert & George may have in mind for the creation of their new democracy. Sadly, as we saw so recently with the Turner Prize, our mod- ern museum establishment is probably as incapable now of basic sense as it is of intellectual honesty. With a new year in the offing, it would be reassuring to believe some major and overdue changes are on the way.