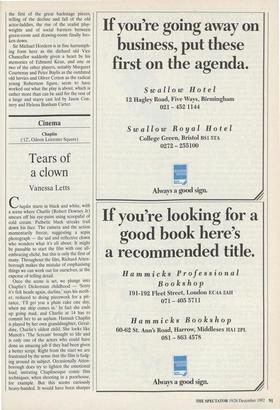 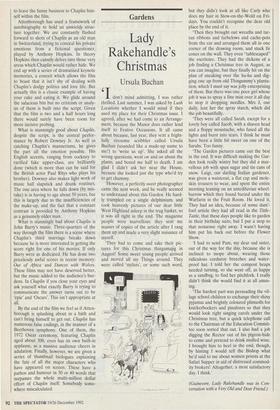 Tears of a clown

Chaplin starts in black and white, with a scene where Charlie (Robert Downey Jr) smears off his eye-paint using scoopsful of cold cream. Pathetic black streaks trail down his face. The camera and the action momentarily freeze, suggesting a sepia photograph — the sad and reflective clown who wonders what it's all about. It might be passable to start the film with one all- embracing cliché, but this is only the first of many. Throughout the film, Richard Atten- borough makes the mistake of emphasising things we can work out for ourselves, at the expense of telling detail.

Once the scene is set, we plunge into Chaplin's Dickensian childhood — 'Sorry it's fish heads again, darlins,' says his moth- er, reduced to doing piecework for a pit- tance, 'I'll get you a plum cake one day, when me ship comes in.' In fact she ends up going mad, and Charlie at 14 has to commit her to an asylum. Hannah Chaplin is played by her own granddaughter, Geral- dine, Charlie's oldest child. She looks like Munch's 'The Scream' brought to life and is only one of the actors who could have done an amazing job if they had been given a better script. Right from the start we are frustrated by the sense that the film is fudg- ing around its subject. Occasionally Atten- borough does try to lighten the emotional load, imitating Chaplinesque comic film techniques, when shooting in a poorhouse, for example. But this seems curiously heavy-handed. It would have been sharper to leave the funny business to Chaplin him- self within the film.

Attenborough has used a framework of autobiography to hold an unwieldy struc- ture together. We are constantly flashed forward to shots of Chaplin as an old man in Switzerland, trying to conceal his private emotions from a fictional questioner, played by Anthony Hopkins. In theory Hopkins then cannily delves into those very areas which Chaplin would rather hide. We end up with a series of dramatised keynote memories, a conceit which allows the film to boast that it isn't shy of dealing with Chaplin's dodgy politics and love life. But actually this is a classic example of having your cake and eating it. We glide around the salacious bits but no criticism or analy- sis of them is built into the script. Given that the film is two and a half hours long there would surely have been room for more incisive probing.

What is stunningly good about Chaplin, despite the script, is the central perfor- mance by Robert Downey Jr. As well as catching Chaplin's mannerisms, he gives the part all the emotion possible. His English accents, ranging from cockney to rarified fake upper-class, are brilliantly done (which is more than can be said for the British actor Paul Rhys who plays his brother). Downey also makes light work of music hall slapstick and drunk routines. The one area where he falls down (by mis- take) is in having to age about 50 years, but this is largely due to the insufficiencies of the make-up, and the fact that a constant contrast is provided by Anthony Hopkins as a genuinely older man.

What is stunningly bad about Chaplin is John Barry's music. Three-quarters of the way through the film there is a scene where Chaplin's third marriage breaks down because he is more interested in getting the score right for one of his movies. If only Barry were as dedicated. He has done two pricelessly awful scores in recent memory: Out of Africa and Dances with Wolves. These films may not have deserved better, but the music added to the audience's bur- dens. In Chaplin if you close your eyes and ask yourself what exactly Barry is trying to communicate the answer turns out to be 'epic' and 'Oscars'. This isn't appropriate at all.

By the end of the film we feel as if Atten- borough is splashing about in a bath and can't bring himself to get out. Chaplin has numerous false endings, in the manner of a Beethoven symphony. One of them, the 1972 Oscar ceremony, featuring Chaplin aged about 300, even has its own built-in applause, as a massive audience cheers in adulation. Finally, however, we are given a series of thumbnail biologues explaining the fate of all the major characters who have appeared on screen. These have a pathos and humour in 30 or 40 words that surpasses the whole multi-million dollar effort of Chaplin itself. Somebody some- where miscalculated.