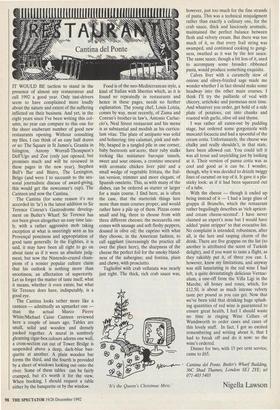 IT WOULD BE tactless to stand in the presence of almost any restaurateur and call 1992 a good year. Only taxi-drivers seem to have complained more loudly about the nature and extent of the suffering inflicted on their business. And yet, in the eight years since I've been writing this col- umn, no year can compare to this one for the sheer exuberant number of good new restaurants opening. Without consulting my files, I can think of an easy half dozen or so: The Square in St James's, Granita in Islington, Antony Worrall-Thompson's Dell'Ugo and Zoe (only just opened, but promises much and will be reviewed in these pages in the new year), Stephen Bull's Bar and Bistro, The Lexington, BeIgo (and were I to succumb to the sea- sonal journalistic disease of award-giving, this would get the newcomer's cup), The Canteen and now the Cantina.

The Cantina (for some reason it's not accorded its `la') is the latest addition to Sir Terence Conran's Gastrodrome develop- ment on Butler's Wharf. Sir Terence has not been given altogether an easy time late- ly, with a rather aggressive mob taking exception at what is sneeringly seen as his Provençal ponciness and appropriation of good taste generally. In the Eighties, it is said, it may have been all right to go on about taste as if it were an absolute judg- ment, but now the Nintendo-crazed cham- pions of a noisier popular culture claim that his outlook is nothing more than snootiness, an affectation of superiority. Let us forget the matter of taste itself, what it means, whether it even exists; but what Sir Terence does have, indisputably, is a good eye.

The Cantina looks rather more like a canteen — admittedly an upmarket one — than the actual Marco Pierre White/Michael Caine Canteen reviewed here a couple of issues ago. Tables are small, solid and wooden and densely packed together. A mural in sombrely gleaming cigar-box colours adorns one wall, a cross-section cut out of Tower Bridge is suspended above a deep, dark-blue ban- quette at another. A plain wooden bar forms the third, and the fourth is provided by a sheet of windows looking out onto the river. Some of these tables can be fairly cramped, but it's worth it for the view. When booking, I should request a table either by the banquette or by the window. Food is of the neo-Mediterranean style, a kind of Italian with liberties which, as it is found so repeatedly in restaurants and hence in these pages, needs no further explanation. The young chef, Louis Loizia, comes by way, most recently, of Zuma and Conran's brother-in law's, Antonio Carluc- cio's, Neal Street restaurant and his menu is as substantial and modish as his curricu- lum vitae. The plate of antipasto was solid and bolstering: tiny calamari, pink and nub- bly, heaped in a tangled pile in one corner, baby beetroots sott'aceto, their ruby stalks looking like miniature baroque tassels, sweet and sour onions, a crostino smeared with aromatic chicken liver pâté and a small wedge of vegetable frittata, the Ital- ian version, trimmer and more elegant, of Spanish omelette. This, as with many of the dishes, can be ordered as starter or larger for a main course. I find here, as is often the case, that the starterish things lure more than main courses proper, and would rather have a pile up of them. Pizzas come small and big, three to choose from with three different cheeses: the mozzarella one comes with sausage and soft fleshy peppers, doused in olive oil; the caprino with what they choose, in the American fashion, to call eggplant (increasingly the practice all over the place here), the sharpness of the cheese the perfect foil for the smoky bland- ness of the aubergine; and fontina, plain and chewy, with prosciutto.

Tagliolini with crab vellutata was nearly just right. The thick, rich crab sauce was, 'It's the Queen's Christmas Mess.' however, just too much for the fine strands of pasta. This was a technical misjudgment rather than exactly a culinary one, for the crab sauce, thick and lusciously aromatic, maintained the perfect balance between flesh and velvety cream. But there was too much of it, so that every frail string was swamped, and continued cooking to gungi- ness, swathed as it was by the hot sauce. The same sauce, though a bit less of it, used to accompany some broader ribboned pasta, would produce something exquisite.

Calves liver with a caramelly stew of onions and olivey-frizzled sage made me wonder whether I in fact should make some headway into the other main courses. I think I'll try the paillarde of veal with chicory, artichoke and parmesan next time. And whatever you order, get hold of a side plate of potatoes, cut into chunks and roasted with garlic, olive oil and thyme.

I was rather all eaten-out by pudding stage, but ordered some gorgonzola with muscatel focaccia and had a spoonful of the cream cotta. Unfortunately, the cheese was chalky and really shouldn't, in that state, have been allowed out. You could tell it was all tense and unyielding just by looking at it. Their version of panna cotta was as cool and good as it can be. I wonder, though, why it was decided to drizzle twiggy lines of caramel on top of it. It gave it a pla- sticky look: as if it had been squeezed out of a tube.

With the cheese — though it ended up being instead of it — I had a large glass of grappa di Brunello, which the restaurant rather beguilingly describes as 'rich apricot- and cream cheese-scented'. I have never claimed an expert's nose but I would have added 'paint stripper' to that evocative list. No complaint is intended; robustness, after all, is the lure and rasping charm of the drink. There are five grappas on the list (to another is attributed the scent of Turkish delight), and if you want to taste a flight, as they rakishly put it, of three you can. I, however, knew my limitations, and anyway was still luxuriating in the red wine I had left, a quite devastatingly delicious Vernac- ulum, a one-off from the Villa Ligi in the Marche, all honey and roses, which, for £12.50, is about as much intense velvety taste per pound as you can get. Now that we've been told that drinking huge splash- ing quantities of red wine is guaranteed to ensure great health, I feel I should waste no time in ringing Wine Cellars of Wandsworth to order cases and cases of this lovely stuff. In fact, I got so excited remembering and writing about it, that I had to break off and do it now: so the wine's ordered.