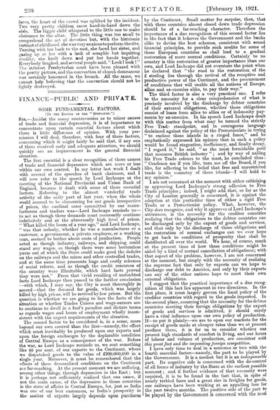 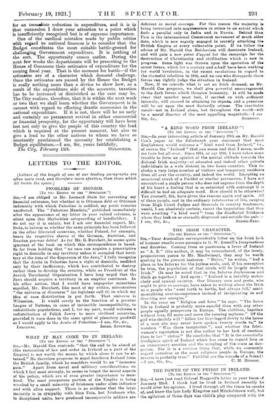 [To rim EDITOR or TEE " SPEOTATOR."] Six,—Amidst the many controversies as to minor oauses of trade and financial depression, it is of importance to concentrate upon certain essential factors about which there is little difference of opinion. With your per- mission I will deal, therefore, with four of these factors, concerning which it might fairly be said that, if any one of them received early and adequate attention, we should quickly see an improvement in the general financial situation.

The first essential is a clear recognition of those causes of trade and financial depression which are more or less within our own control. In my letter last week I dealt with several of the speeches of bank chairmen, and I will now refer to the speech by Lord Inchcape at the meeting of the National Provincial and Union Bank of England, because it dealt with some of these essential factors. Referring to the almost wonderful trade nativity of the early part of last year, when the whole world seemed to be clamouring for our goods irrespective of prices, the cardinal error committed by our manu- facturers and traders was—Lord Inchcape reminds us— to act as though these demands must necessarily continue indefinitely and at the abnormally high level of prices. What killed the boom of a year ago," said Lord Inchcape, " was that nobody, whether he was a manufacturer or a customer, a government, a private employer, or a working man, seemed to bother about costs of production. People acted as though industry, railways, and shipping could stand any wages, as though there were some bottomless purse out of which the State could make good the deficits on the railways and the mines and other controlled trades, and at the same time prosecute huge and costly schemes of social reform, and as though the credit resources of the country were illimitable, which hard facts proved they were not." From that vivid recalling of undoubted facts Lord Inohcape then passed to the further conclusion —with which, I may say, the City is most thoroughly in accord—that the demand for goods, which was largely killed by high prices, will be revived by low prices. But the question is whether we are going to face the facts of the situation or whether Trades Unions and wage-earners are to continue to dwell in a fool's paradise and dictate terms as regards wages and hours of employment wholly incon- sistent with the urgent requirements of the situation.

The second factor to be considered is, in a sense, more beyond our own control than the first—namely, the effect which must inevitably be produced upon our exports and upon the foreign exchanges by the deplorable condition of Central Europe as a consequence of the war. Before the war, as Lord Inchcape reminds us, we sent something like 40 per cent. of our exports to the Continent, where we dispatched goods to the value of £200,000,000 in a single year. Moreover, it must be remembered that the effects of these demoralized conditions on the Continent are far-reaching. At the present moment we are suffering, among other things, through depression in the Feast ; but it is perhaps not sufficiently realized that one cause, if not the main cause, of the depression in those countries is the state of affairs in Central Europe, for, just as India was one of our best customers, so India's prosperity in the matter of exports largely depends upon purchas by the Continent. Small matter for surprise, then, that with these countries almost closed down trade depression should be of a far-reaching character. Therefore the importance of a due recognition of this second factor lies in the fact that it behoves the Government and the banks alike to devise the best schemes, consistent with sound financial principles, to provide such credits for some of these European countries as shall lead to a gradual restoration of more normal conditions. Certainly to no country is this restoration of greater importance than our own, and Lord Inchcape did not overstate the point when he declared that " the road to the restoration, of the £ sterling lies through the revival of the receptive and productive power of the Continent, and the procurement of conditions that will enable all the nations of Europe, allies and ex-enemies alike, to pay their way." The third factor is also a very practical one. I refer to the necessity for a clear comprehension of what is precisely involved by the discharge by debtor countries of their external obligations, whether those obligations consist of loans from allies to allies or of indemnity pay- ments by ex-enemies. In his speech Lord Inchcape dealt with this matter from what may be termed the strictly Free Trad•i standpoint, and m courageous language declaimed against the policy of the Protectionists in trying " to enclose these islands in a ringed fence," and he emphatically expressed his opinion that in such a policy would be found stagnation, inefficiency, and finally decay. " I regard it," he said, " as the most formidable peril that menaces British industry " ; and by way of nailing his Free Trade colours to the mast, he concluded thus : " Condemn me if you like, turn me off the Board, if you like, for adhering to the belief that free and unrestricted trade is the mainstay of these islands—I will hold to my opinion." I am not concerned at the moment with either criticizing or approving Lord Inchcape's strong adhesion to Free Trade principles ; indeed, I might add that, so far as the City of London generally is concerned, it is against the adoption at this particular time of either a rigid Free Trade or a Protectionist policy. What, however, the City does recognize, and why it approves of Lord Inchcape's utterances, is the necessity for the creditor countries realizing that • the obligations to the debtor countries can be discharged only by the export of goods and services, and that only by the discharge of those obligations and the restoration of normal exchanges can we ever hope to get back to conditions of prosperity that shall be distributed all over the world. We hear, of course, much at the present time of how these conditions might be aided by a kind of mutual cancellation of obligations; with that aspect of the problem, however, I am not concerned at the moment, but simply with the necessity of realizing the supreme fact that only by exports can we hope to discharge our debt to America, and only by their exports can any of the other nations hope to meet their own external obligations.

I suggest that the practical importance of a due recog- nition of this fact lies apparent in two directions. In the first place, it must largely govern the fiscal policy of the creditor countries with regard to the goods imported. In the second place, assuming that the necessity for the debtor countries meeting their foreign obligations by the export of • goods and services is admitted, it should surely have a vital influence upon our own policy of production. If—to put it plainly—we are to open our markets for the receipt of goods made at cheaper rates than we at present produce them, it is for us to consider whether our present high standards of comfort in living, and our hours of labour and volume of production, are consistent with this great fact and the impending foreign competition. I have only time to deal in a sentence or two with the fourth essential factor—namely, the part to be played by the Government. It is a modest but it is an indispensable part. Its negative side is concerned with the de-control of all forms of industry by the State at the earliest possible moment ; and if further evidence of that necessity were required, it is to be found in the fact that, in spite of nearly trebled fares and a great rise in freights for goods, our railways have been working at an appalling loss for the past twelve months. The positive side of the part to be played by the Government is concerned with the need for an immediate reduction in expenditure, and it is in that connexion I draw your attention to a point which is insufficiently recognized but is of supreme importance. One of the cardinal mistakes made by public critics with regard to national finances is to consider that the Budget constitutes the most suitable battle-ground. for challenging Government expenditure. It is nothing of the sort. The opportunity comes earlier. During the next few weeks the departments will be presenting to the House of Commons their estimates of expenditure for the coming fiscal year. That is the moment for battle—if the estimates are of a character which demand challenge. Once the estimates are passed by the House the Budget is really nothing more than a device to show how, as a result of the expenditure side of the accounts, taxation has to be increased or diminished as the case may be. The City realizes, therefore, that it is within the next week or two that we shall learn whether the Government is in earnest with regard to effecting drastic economies in the national expenditure. If it is not, there will be no early and certainly no permanent revival in either commercial or financial prosperity, for the opportunity will have been lost not only to give the people of this country the lead which is required at the present moment, but also to give a lead to the other nations to whom we have so constantly proclaimed the necessity for establishing a Budget equilibrium.—I am, Sir, yours faithfully,