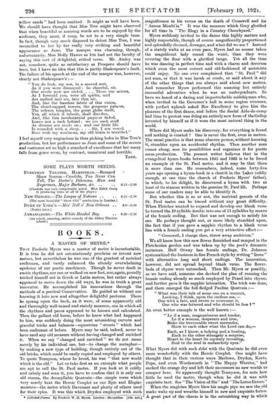 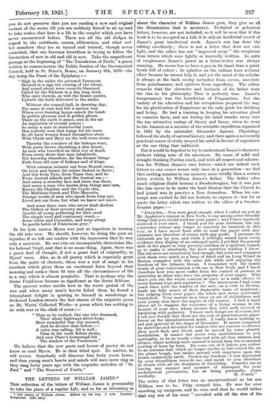 A MASTER OF METRE.*

THAT Frederic Myers was a master of metre is incontestable. It is true he did not ostentatiously proclaim or invent new metres, but nevertheless he was one of the greatest of metrical craftsmen, and vastly enhanced the already overwhelming opulence of our poetic machinery. Though he never dealt in exotic rhythms, nor ran or walked on new feet, nor, again, proudly tricked himself out in Greek or Latin metres, but rather always appeared to move down the old ways, he was in truth a great innovator. He accomplished his innovations through the methods of a poetical Conservative. He guided us without our knowing it into new and altogether delightful pastures. There he sprang upon the back, as it were, of some apparently old and thoroughly well-tamed and stately measure, one in which all the rhythms and paces appeared to be known and calculated. Then the gallant old horse, before he knew what had happened to him, was suddenly doing the most astonishing curvets and graceful tricks and balances—equestrian " stunts " which had been undreamt of before. Myers may be said, indeed, never to have used any old measure without having changed and enriched it. When we say " changed and enriched " we do not mean merely by his individual use, but—to change the metaphor— by making a new type of building, though entirely out of the old bricks, which could be easily copied and employed by others. To quote Tennyson, whom he loved, his was " that new world which is the old." Let us take first as an example what people are apt to call the St. Paul metre. If you look at it coldly and calmly and scan it, you have to confess that it is only our old stanza, tho decasyllabic Quatrain—the simple verse which very nearly beat the Heroic Couplet as our Epic and Elegiac measure—the metre which Davenant and plenty of others used for their epics. It was this which Dryden employed with such • Collected Poems. By Frederic W. H. Myers. London : Macmillan. net.] magnificence in his verses on the death of Cromwell and his Annus Mirablis." It was the measure which Gray glorified for all time in " The Elegy in a Country Churchyard."

Myers suddenly invited to the dance this highly mature and highly respectable, though of course magnificently proportioned and splendidly dressed, dowager, and what did we see ? Instead of a stately waltz at an even pace, Myers had no sooner taken the magnificent lady round the waist, than they were covering the floor with a glorified tango. Yet all the thus he was dancing in perfect time and with a charm and decorum which even the most correct and old-fashioned of metricists

could enjoy. No one ever complained that " St. Paul " did not scan, or that it was harsh or crude, or said about it any of the other things that are always said about new metres. And remember Myers performed this amazing but entirely successful adventure when he was an undergraduate. So have we heard of a daring and imperturbable midshipman who, when invited to the Governor's ball in some region overseas, with perfect aplomb asked Her Excellency to give him the pleasure of the first dance, and before the Social Aide-de-camp had time to protest was doing an entirelynew form of the Gallop invented by himself as if it were the most natural thing in the world.

Where did Myers make his discovery, for everything is found and nothing is created ? One is never the first, even in metres.

The usual practice is that some obscure person, without knowing it, stumbles upon an accidental rhythm. Then another man comes along, sees its possibilities and organizes it for poetics mass-production. The present writer believes that in the evangelical hymn-books between 1845 and 1865 is to be found an example of the St. Paul metre, and it may be that there is more than one. He remembers, indeed, some forty-five years ago opening a hymn-book in a church in the Lakes (oddly enough, at one time the church of Frederic Myers' father), in which, to his delight, he discovered a hymn with two at least of its stanzas written in the genuine St. Paul lilt. Perhaps some of our readers may be able to identify it.

But whether this is so or not, the metrical genesis of the St. Paul metre can be traced without any great difficulty.

of the female ending. But that was not enough to satisfy his ear. He perhaps thought out, or more likely stumbled upon, the fact that if you gave a sappbic rhythm to a blank verse line with a female ending you get a very attractive effect :—

We all know how this new flower flourished and ramped in the Fletcherian garden and was taken up by the poet's dramatic imitators. Half Otway has female endings, Dr. Johnson systematized the business in fine French style by writing "Irene" with alternative long and short endings. The innovation, however, did not spread beyond blank verse. The flower- beds of rhyme were untouched. Then Mr. Myers or possibly, as we have said, someone else devised the plan of running the female ending already so much employed by Praed into rhyme, and further gave it the sapphic intonation. The trick was done, and there emerged the full-fledged Pauline Quatrain :— " What was their tale of some one on a summit, Looking, I think, upon the endless sea,— One with a fate, and sworn to overcome it, One who was fettered and who should be free ? "

An even better example is the well known :— " Lo if a man, magnanimous and tender, Lo if a woman, desperate and true,

Show to each other what the Lord can do,— Each, as I know, a helping ands healing, Each to the other strangely a surprise, Heart to the heart its mystery revealing,

Soul to the soul in melancholy eyes."

What Myers did with such éclat with the Quatrain he did even more wonderfully with the Heroic Couplet. One might have thought that in their various ways Marlowe, Dryden, Keats, Pope, and even Wordsworth in " The Happy Warrior," had sucked the orange dry and left their successors no new worlds to conquer here. So apparently thought Tennyson, for note how little he used the metre, though when, he did it was with

exquisite tact. See "The Vision of Sin" and "The Lotus Eaters." When the magician Myers blow his magic pipe we saw the,,old

snake wake up and wreathe himself in new and exquisite forms. A great part of the charm is in the astonishing way in which you do not perceive that you are reading a new and original variant of the metre till you are suddenly forced to sit up and to take notice that here is a lilt in the couplet which you have never encountered before. There are all the old dodges in regard to the antithesis, cesura, alliteration, and what not but somehow they are so turned and twisted, though never contorted, that one becomes breathless in trying to follow the interaction of new in old and old in new. Take the magnificent passage at the beginning of " The Translation of Faith," a poem written to commemorate the Public Session of the Oecumenical Council, held in St. Peter's, Rome, on January 6th, 1870—the day being the Feast of the Epiphany :— " High in the midst the pictured Pentecost Showed in a sign the coming of the Ghost, And round about were councils blazoned Called by the Fathers in a day long dead, Who once therein, as well the limner paints, Upbuilt the faith delivered to the saints.

Without the council-hall, in dawning day, The mass of men had left a narrow way Where ever-burning lamps enloek the tomb In golden glamour and in golden gloom. There on the earth is peace, and in the air An aspiration of eternal prayer ; So many a man in immemorial years Has scarcely seen that image for his tears, So oft have women found themselves alone With Christ and Mary on the well-worn stone.

Thereby the conclave of the bishops went, With grave brows cherishing a dim intent, As men who travelled on their eve of death From every shore that man inhabiteth, Not knowing wherefore, for the former things Fade from old eyes of bishops and of kings.

With crimson raiment one from Bozrah came, On brow and breast the rubies flashed in flame ; And this from Tyre, from Tunis that, and he From Austral islands and the Austral sea ;- And many a swarthy face and stern was there, And many a man who knows deep things and rare, Knows the Chaldaic and the Coptic rite,

The Melchian-Greek and Ebio-Maronite, Strange words of men who speak from long ago, Lived not our lives, but what we know not know.

The simple cowl and customary weed,—

Some white and Carmelite, and some alway In gentle habit of Franciscan grey."

In his lyric metres Myers was just as ingenious in turning the old into new. We should, however, be doing the poet an injustice if we left our readers with the impression that he was only a metricist. He was also an incomparable rhetorician like his beloved Virgil, and that is no mean thing. Again, there was a great deal of thought, if not a great deal of originality, in Myers' verse. Also, as in all poetry which is especially great from the point of rhetoric, there was a sort of magic in his numbers which gives them an emotional force beyond their meaning and makes them fit into all the circumstances of life in a way which is almost prophetic. That is perhaps why the Sorter Virgilianae became as significant as the Boras Biblicae.

The present writer recalls how in the worst period of the war and when many men's hearts failed them he found a triumphant delight in quoting to himself in wanderings in darkened London streets the last stanza of the exquisite poem on Mr. Watts' Collected Works—a poem which has nothing to do with war or the clash of arms :—

Thro' silent highways silver-hoar, More wonderful that city seemed, And he diviner than before :-

A voice was calling, All is well ;

Clear in the vault Selene shone, And over Plato's homestead fell The shadow of the Parthenon."

We believe that the new poets and lovers of poetry do not know or read Myers. He is their blind spot. No matter, he will revive. Somebody will discover him forty years hence, and then young men's hearts and minds will once- more ring as they rang forty years ago with the exquisite melodies of " St. Paul " and " The Renewal of Youth."