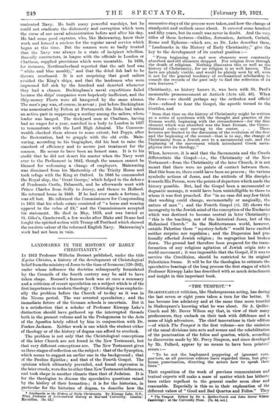 LANDMARKS IN THE HISTORY OF EARLY CHRISTIANITY.* IN 1913 Professor

Wilhelm Bousset published, under the title Kyrios Christos, a history of the development of Christological belief from the ministry of Jesus to the time of Irenaeus (120-202), under whose influence the doctrine subsequently formulated by the Councils of the fourth century may be said to have taken shape. Bousset's famous book was at once a summary and a criticism of recent speculation on a subject which is of the first importance to modern theology ; Christology is as emphatic. ally the problem before the Church of to-day as it was in the Nicene period. The war arrested speculation ; and the immediate future of the German schools is uncertain. But it is a satisfaction that a scholar of Professor Kirsopp Lake's distinction should have gathered up the interrupted threads both in the present volume and in the Prolegomena to the Acts of the Apostles lately edited by him in conjunction with Dr. Foakes Jaokson. Neither work is one which the student either of theology or of the history of dogma can afford to overlook.

The problem is not only that the Christological conceptions of the later Church are not found in the New Testament, but that very different conceptions are. The New Testament gives us three stages of reflection on the subject : that of the Synoptics, which seems to suggest an earlier one in the background ; that of the Pauline Epistles ; and that of the Fourth Gospel. The opinions which ultimately prevailed, and found expression in the later creeds, were due to other than New Testament influences, and took shape in another climate than that of Judaism. It is for the theologian to discuss the speculative questions raised by the history of their formation ; it is for the historian, in particular for the historian of dogma, to describe how the

successive steps of the process were taken, and how the change of standpoint and outlook came about. It covered some hundred and fifty years, but its result was never in doubt. And the very titles of those lectures—Galilee, Jerusalem, Antioch, Corinth, Rome and Ephesus—which are, as Dr. Lake describes them,

" Landmarks in the History of Early Christianity," give the key to the development of its central position :- "From beginning to end new elements were constantly absorbed and old elements dropped. For religion lives through the death of religions. Nothing illustrates this so well as the history of Christianity, for no religion is so well known. The facts are plainly visible, and would be plainly seen by all, were it not for the general tendency of ecclesiastical scholarship to consult the records of the past only to find the reflection of its own features."

Christianity, as history knows it, was born with St. Paul's memorable pronouncement at Antioch (Acts xiii. 46). When the Jews—we should perhaps say the orthodox and official Jews—refused to hear the Gospel, the apostle turned to the Gentiles, and " from that time on the history of Christianity might be written as a series of syntheses with the thought and practice of the Roman world, beginning with the circumference—for the first element which was absorbed was the least Roman, the Grmco- Oriental cults—and moving to the centre. . . . These lectures are limited to the discussion of the evolution of the first and the beginning of the second—that is to say, the change of Christianity from a Jewish sect to a sacramental cult, and the beginning of the movement which introduced Greek meta- physics into its theology."

When, however, it is said that the Sacraments and the Creeds differentiate the Gospel—i.e., the Christianity of the New Testament—from the Christianity of the later Church, it is not meant that there were no points of contact between them. Had this been so, there could have been no process ; the various symbolic actions of Jesus, and the attitude of His disciples twards His Person, were the points of departure which made the history possible. But, had the Gospel been a sacramental or dogmatic message, it would have been unintelligible to those to whom it was first preached. For "in no case did any Jew think that washing could change, sacramentally or magically, the nature of man" ; and the Fourth Gospel (vi. 52) shows the incongruity to the Jewish mind of the conception of the Eucharist which was destined to become central in later Christianity: " this is the teaching, not of the historical Jesus, but of the Hellenised Church." In the Mediterranean world, however, outside Palestine these " mystery-beliefs " would have excited neither surprise nor repulsion ; and the Dispersion had pro- foundly affected Jewish religion ; its segregation had broken down. The ground had therefore been prepared for the trans- formation of any religious agitation of Jewish origin into a world-movement ; it was impossible that the Gospel, if it was to survive the Crucifixion, should be restricted to its original Palestinian frame. It will be for the theologian to estimate the speculative bearings of the long process the first stages of which Professor Kirsopp Lake has described with so much detachment and insight in this important book.