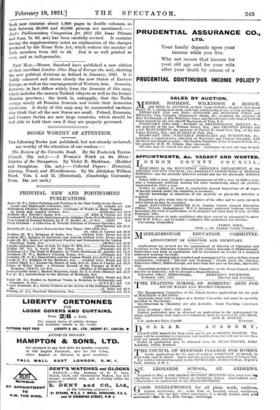 Page 25, 19 February 1921 — Naw Mar.—Messrs. Stanford have published a new edition of their
Close

Naw Mar.—Messrs. Stanford have published a new edition of their

excellent London Atlas Map of Europe (4s. net), showing the new political divisions as defined in January, 1921. It is boldly coloured and shows clearly the new States of Eastern Europe, as well as the rearrangement of Western Asia. Armenia, however, in fact differs widely from the Armenia of this map, which includes the eastern Turkish vilayets as well as the former Russian province ; the truth is, unhappily, that the Turks occupy nearly all Russian Armenia and retain their Armenian territories. A-Study of this map may be commended takthose who think that all the new States are small. Poland, Rumania, and Greater Serbia are now large countries, which should be Well able to hold their own if they are properly governed.