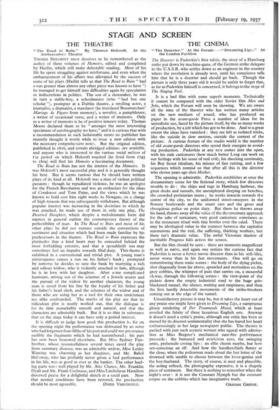 The Deserter is Pudovkin's first talkie, the story of a

Hamburg strike put down by machine-guns, of the German strike delegate to the U.S.S.R. who settles down as an engineer in the country where the revolution is already won, until his conscience tells him that he is a deserter and should go back. Though the picture is only three years old it would be unfair to forget that, as far as Pudovkin himself is concerned, it belongs to the stage of The Singing Fool.

It is a bad film with some superb moments. Technically • it cannot be compared with the older Soviet film Men and Jobs, which the Forum will soon be showing. We are aware all the time of the theorist who has written many articles on the new medium of sound, who has produced on paper in the avant-garde Press a number of ideas for its unrealistic use, faced by the picture itself, by the so many weeks of production, by a job which has got to be done. And to a great extent the ideas have vanished : they are left as isolated tricks, like the suicide in slow motion, outside the context of the picture. A curious feature of the studio world is the number of old avant-garde directors who spend their energies in avoid- ing production. Pudovkin at any rate comes into the open, with his stale caricatures (how much better Lang can work on our feelings with his sense of real evil), his shocking continuity, his Boy Scout idealism, his misuse of fast cutting, and a few sequences which remind us that after all this is the director who eleven years ago shot Mother.

The opening is admirable. Pudovkin establishes at once the documentary scene for the fictional story, which few directors trouble to do : the ships and tugs in Hamburg harbour, the great docks and tunnels, the unemployed sleeping on benches, the crowded proletarian trams ; he works inwards towards the centre of the city, to the uniformed street-sweepers in the flowery boulevards and the smart cars and the gross and obsequious police on point duty. But there he throws away his hand, throws away all the value of the documentary approach for the sake of caricature, very good caricature sometimes as in the restaurant ritual with tiny bottles over the salad. There may be ideological value in the contrast between the capitalist automatons and the real, the suffering, thinking workers, but there isn't dramatic value. The awful Victorian shadow of inevitable Progress falls across the screen.

But the film should be seen : there are moments magnificent as well as naive, and again one notices the curious fact that Pudovkin is never a better movie director than in his still-lifes, never worse than in his fast movements. One will go on remembering these static scenes : the body of the dying picket, shot diagonally from far above, sprawled and motionless on the grey cobbles, the whimper of pain that carries on, a mournful chirus, through the following scenes : the view-point of the pickets down the empty industrial road to the huge grit- blackened tunnel, the silence, waiting and emptiness, and then the first hardly detectable movements of the strike-breakers coming out at the edge of the tunnel.

• Unsatisfactory picture it may be, but it takes the heart out of any praise one might have given to Dreaming Lips, a sumptuous glossy rendering of Der Traumende Mund, which at least avoided the falsity of these luxurious English s sets. Anyway it doesn't need a critic's praise, although one critic has been so moved by its discreet sentimentality that she has bared her heart embarrassingly to her large newspaper public. The theatre is packed with just such ecstatic women who squeal with admira- tion as Miss Bergner's mechanical sure-fire performance proceeds : the bemused and avaricious eyes, the swinging arms, prehensile cooing lips : an elfin charm maybe, but how sex-conscious an elf. And how the handkerchiefs flutter at the close, when the policeman reads aloud the last letter of the drowned wife unable to choose between the lover-genius and the boy-husband. The story, of course, is neat and plausible, the acting refined, the photography expensive, it is a shapely piece of sentiment. But there is nothing to remember when the night's over : it is not the Constant Nymph but the constant corpse on the cobbles which has imaginative truth.