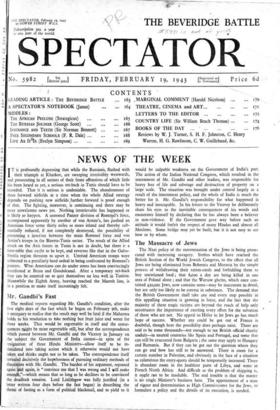 The medical reports regarding Mr. Gandhi's condition, after the first eight days of the fast which he began on February 9th, make it necessary to realise that the result may well be fatal if the Mahatma holds to his resolution to take nothing but fruit juice and water for three weeks. That would be regrettable in itself and the conse- quences might be mare regrettable still, but after the correspondence which passed between Mr. Gandhi and the Viceroy in January on the subject the Government of India cannot—in spite of the resignation of three Hindu Ministers—allow itself to be in- timidated into taking action which it otherwise would not have taken and thinks ought. not to be taken. The correspondence itself revealed decisively the hopelessness of pursuing ordinary methods of discu*ion with Mr. Gandhi._ The burden of his argument, repeated again And again, is "convince me that I was wrong and I will make amenck,"—which means that so long as he declines to be convinced the deadlock remains. Lord Linlithgow was fully justified (in a letter written four days before the fast began) in describing the threat of fasting as a form of political blackmail, and to yield to it would be culpable weakness on the Government of India's part. The action of the Indian National Congress, which resulted in the internment of Mr. Gandhi and other leaders, was responsible for heavy loss of life and sabotage and destruction of property on a large scale. The situation was brought under control largely as a result of the internment policy, and the whole of India is much the better for it. Mr. Gandhi's responsibility for what happened is heavy and inescapable. In his letters to the Viceroy he deliberately shuts his eyes to the inevitable consequences of his words and exonerates himself by declaring that he has always been a believer in non-violence. If the Government gave way before such an attitude it would forfeit the respect of many Hindus and almost all Moslems. Some bridge may yet be built, but it is not easy to see how or by whom.