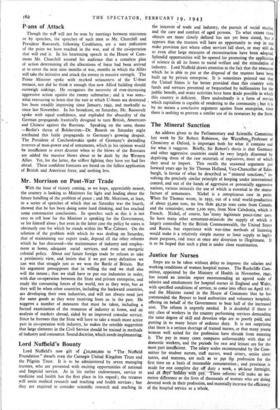 With the hour of victory coming, as we hope, appreciably nearer, the country is looking to Ministers for light and leading about the future handling of the problem of peace ; and Mr. Morrison, at least, in a series of speeches of which that on Saturday was the fourth, showed that he has been doing some hard thinking, and has reached some constructive conclusions. In speeches such as this it is not easy to tell how far the Minister is speaking for the Government, or for himself alone ; but even in the latter case the policy he states is obviously one for which he stands within the War Cabinet. On the solution of the problem with which he was dealing on Saturday, that of maintaining our export trade, depend all the other reforms which he has discussed—the maintenance of industry and employ- ment at home, adequate social services, and even an energetic colonial policy. About our' future foreign trade he refuses to take a pessimistic view, and insists that if we put away defeatism we can win that struggle just as we won the Battle of Britain. But his argument presupposes that in willing the end we shall also will the means ; that we shall have to put our industries in order, with due co-operation between the State and private enterprise, and study the consuming forces of the world, not as they were, but as they will be when other countries, including the backward countries, are developing their own industries, and will not always need just the same goods as they were receiving from us in the past. He suggests a number of measures that must be taken, including a factual examination of the resources of industry at home, and an analysis of markets abroad, aided by an improved consular service. Since he foresees that the State will have to take a much more active part in co-operation with industry, he makes the sensible suggestion that large elements in the Civil Service should be trained in methods of industry and commerce. Sound doctrine, which needs implementing.