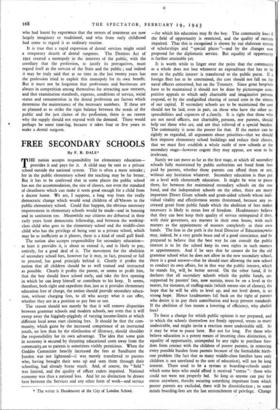 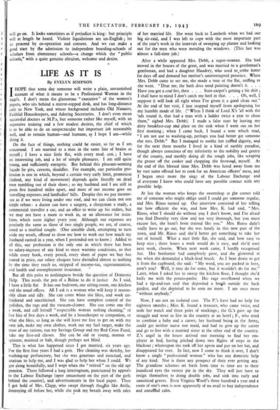 The nation also accepts responsibility for secondary education— at least it provides it, is about to extend it, and is likely to pay, entirely, for a good deal of it. The movement for the abolition of secondary school fees, however far it may, in fact, proceed or fail to proceed, has good principle behind it. Clearly it profits the nation that all children should be as well trained and instructed as possible. Clearly it profits the parent, or seems to profit him, that the boy should leave school early, and take the first opening in which he can keep himself or contribute to his keep. It seems, therefore, both right and expedient that, just as it provides elementary education free of charge, the nation should provide secondary educa- tion, without charging fees, to all who accept what it can offer, whether they are in a position to pay fees or not.

The reason should not merely be that it will remove disparities between grammar schools and modern schools, nor even that it will sweep away the higgledy-piggledy of varying income-limits at which different local areas start claiming fees. It should be that the com- munity, which gains by the increased competence of an instructed youth, no less than by the elimination of illiteracy, should shoulder the responsibility for its own advantage. The idea that some gain in economy is secured by thrusting educational costs away from the community..on to parents is sometimes visibly pernicious. When the Geddes Committee heavily increased the fees at Sandhurst the burden was not lightened—it was merely transferred to parents who, having brought their sons up and seen them through their schooling, had already borne much. And, of course, the "field " was limited, and the quality of officer cadets impaired. National economy was thus a national loss. And let no distinction be drawn here between the Services and any other form of work—and service * The writer is Headmaster of the City of London School.

—for which his education may fit the boy. The community loses if the field of opportunity is restricted, and the quality of recruits impaired. That this is recognised is shown by our elaborate system

of scholarships and "special places "—and by the changes now proposed for the diplomatic service. But equality of opportunity is further attainable yet.

It is worth while to linger over the point that the community as a whole does not lose whenever an expenditure that has to be met in the public interes- is transferred to the public purse. If a foreign fleet has to be entertained, the cost should not fall on the naval officers concerned, but on the Treasury. Since great hospitals have to be maintained it should not be done by picturesque com- petitive appeals to which only charitable and imaginative persons respond, or by the undignified chasing of casual coin in the streets of our capital. If secondary schools are to be maintained the cost should not be laid, even in part, on those who have the other re- sponsibilities and expenses of a .family. It is right that those who are not naval officers, nor charitable persons, nor parents, should help out those who are, and are thus relieved of a special burden. The community is none the poorer for that. If the matter can be rightly so regarded, all arguments about priorities—that we should first improve elementary school buildings and reduce their classes, that we must first establish a whole outfit of new schools at the secondary stage—however cogent they may appear, are seen to be irrelevant.

Surely we can move as far as the first stage, at which all secondary schools fully maintained by public authorities are freed from fees paid by parents, whether those parents can afford them or not, without any hesitation whatever. Secondary education is thus put on a level with elementaty education. It might be wise to pause there, for between the maintained secondary schools on the one hand, and the independent schools on the other, there are many important Direct Grant schools and grant-aided schools whose indi- vidual vitality and effectiveness seems threatened, because any in- creased grant from public funds which the abolition of fees makes necessary is likely to mean loss of freedom. Headmasters believe that they can best keep their quality of service unimpaired if they, with their governors, are masters in their own house, with such matters as the appointment of masters completely in their own hands. The lion in the path is the local Director of Education;awho may, indeed, be a very gentle beast and of a good conscience, and be prepared to believe that the best way he can consult the public interest is to let the school keep its own rights in such matters as appointments. And if he says that he cannot do for the old grammar school what he does not allow in the new secondary school, there is a good answer—that he should start allowing the new school to conduct its own affairs, for in that way the public interest, which he stands fore will, be better served. On the other hand, if he declares that all secondary schools which the public funds, un- supported by parents' fees, now sustain, must be on a level in the matter, for instance, of staffing-ratio (which means size of classes), the hope that he will be able to level up, and not level down, is no strong hope. Hence headmasters fall back on the right of parents who desire it to pay their contribution and keep present standards. If the abolition of fees means a lowering of efficiency, why abolish fees?

To force a change for which public- opinion is not prepared, and to which the schools themselves are firmly opposed, seems to many undesirable, and might invite a reaction more undesirable still. So it may be wise to pause here. But not for long. For those who believe education is a potent means of lessening class distinction, in equality of opportunity, unimpeded by any right to purchase free- dom from contact with the children of poorer parents, in removing every possible burden from parents because of the formidable.birth- rate problem (the fact that so many middle-class families have only children is not unrelated to the cost of education), will not be long content. There used to be a system at boarding-schools under which some boys who could afford it received "extras ": those who could not were not properly fed. So long as anyone can pay for extras anywhere, thereby securing something important from which poorer parents are excluded, there will be dissatisfaction ; to some minds boarding-fees are the last entrenchment of privilege. Change will go on. It looks sometimes as if prejudice-is king: but principle will at length be heard. Violent liquidations are un-English ; let us proceed by co-operation and consent. And we can make a good start by the admission to independent boarding-schools of scholars from elementary schools—a change which the " public schools," with a quite genuine altruism, welcome and desire.