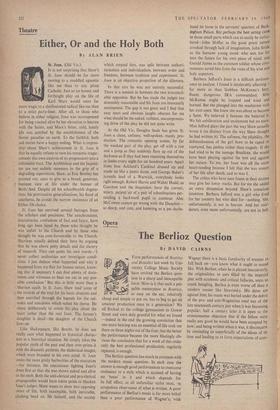 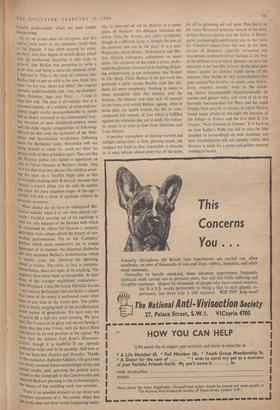 By DAVID CAIRNS 'VGFOUR performances of Beatrice and Benedict last week by Uni- versity College Music Society have revived the Berlioz ques- tion in a sharp and inescapable form. How is it that such a pal- ' pable masterpiece as Beatrice. .14 so easy on the ear, relatively cheap and simple to put on, has to beg to get an amateur production once in a generation? We all flocked to the college gymnasium in Gower Street and were duly grateful for what we found —indeed in the end the growing conviction that one more hearing was an essential of life took me there on three nights out of the four; but the better the performance became the more blazingly ob- vious the conclusion that for a work of this order only the best professional production, regularly repeated, is enough.

The Berlioz question has much in common with the modern music question. In each case the answer is enough good performances to overcome resistance to a style which is accused of having no 'tunes' in it and which depends for its full effect, as all unfamiliar styles must, on scrupulous observance of what is written. A poor performance of Berlioz's music is far more lethal than a poor performance of Wagner's; with Wagner there is a basic familiarity of manner to fall back on—you know what it ought to sound like. With Berlioz, when he is played inaccurately., the originalities, to ears filled by the imperial pint with academic and critical fallacies, seem so much bungling. Berlioz is even worse off than a modern master like Stravinsky. His dates are against him; his music was buried under the debris of the pro- and anti-Wagnerian total war of the late nineteenth century just when it wtis becoming popular; half a century later it is open to the commonsense objection that if the fellow were really any good he would have been accepted by now; and being written when it was, it disconcerts by reminding us superficially of the idiom of its time and leading us to form expectations of com-

fortable predictability which are most rudely disappointed.

In art we praise what we recognise, and this applies even more to the academic mind than to the popular. I was often assured by music teachers, with that degree of owlish idiocy which only an intellectual discipline is able truly to achieve, that Berlioz was powerless to write a good tune; and being a naturally obedient child, I believed it. This is the kind of criticism that Berlioz had to put up with in his own bleak life- time---`as for you, idiots and blind,' the original memoirs understandably end, 'you, my Guilden- stern, Polonius, lago and Osric . . .'—and it dogs him still. The man is all melody—but it is extended melody, of a subtlety of stress and sus- tained, length totally incomprehensible to minds still so deeply immured in the fundamental four- bar structure of most nineteenth-century music and the dully regular irregularities of folk-song- derivatives that even the dynamite of the Mah- lerian and Stravinskian revolutions, following upon the Berliozian (only. Stravinsky will not bring himself to admit it). could not blast the Prkon walls of their prejudice apart. They are like the Parisian public who failed to appreciate an aria in Fidelio because, in Berlioz's words, 'they wait for their four-bar phrases like children await- ing the bean on a Twelfth Night cake or like Provincials awaiting their B natural, the note that makes' a tenor's debut. Let the cake be superb, the tenor the most exquisite singer of the age— neither will win a shred of applause without its precious accessory.'

What chance do we have to understand Ber- liozian melody when it is not even played cor- rectly? Faithful carrying out of his markings is vital not only because of the fineness with which he calculated his effects but because a uniquely individual style cannot afford the luxury of mis- leading performances. Yet in the 'Complete' edition which many conductors use in simple ignorance of its badness, the infamous Malherbe not only amended Berlioz's orchestration, which is merely crass, but distorted his phrasing, which is vicious. The circle, in fact, is complete. Nevertheless, there are signs of its cracking. The auguries have never been so favourable. At least three of "the younger established conductors— John Pritchard, Colin awls and Meredith Davies zealous Berliozians who are likely to ensure that more of his music is performed more often than at any time in the recent past. The public taste is slowly purging itself of the anti-Berliozian Waste matter of generations. We have seen the Requiem fill a hall two years running. We have had The Trojans in its glory and we are having it again (but this time, I trust, with the Royal Hunt and Storm in its true position in the opera). We have had the defunct Carl Rosa's Benvenuto though it is doubtful if our operatic authorities fully took in its qualities. And now at last we have had Beatrice and Benedict. Thanks to the conductor, Anthony Addison, who got from his wholly amateur forces astonishingly lively and stylish results, and, spurning the printed score, turned to the autograph in the Conservatoire and restored Berlioz's phrasing to the orchestral parts, the beauty of this ravishing work was revealed.

There is no possible obstacle to our direct and complete enjoyment of it. We cannot object that the music does not show events happening music- ally—it does not set out to. Beatrice is a comic opera of situation; the dialogue advances the action. Like the Romeo and Juliet symphony, though in a different form, it 'reveals the sum of the passions that are in the play.' It is a non- Wagnerian music-drama. Shakespeare and Ber- lioz, lifelong colleagues, collaborate on equal terms. The simplicity of the music's idiom, under- neath the glorious virtuosity of its flashing, flicker- ing orchestration, is not artlessness; like Mozart in The Magic Flute, Berlioz in his last work has perfected a pure, serene, flexible style that dis- dains all mere complexity. Nothing in music is more wonderful than this serenity and the humour, the honesty and utter lack of rancour in the irony with which Berlioz, ageing, often in acute pain, his health broken, his life in ruins, composed this comedy of love which is fulfilled against the obstacles that are in itself. No roman- tic music is at once so free from bitterness and from illusion.

A peculiar atmosphere of evening warmth and twilight melancholy, a clear, glowing mood, old, resigned but fresh as dew. impossible to describe of to miss, infuses almost every bar of the score,

for all its glittering wit and pace. You feel it in the rustic-flavoured sicilienne danced at the news of Don Pedro's victory over the Turks, in Hero's naïve, enchantingly sentimental aria as she waits for Claudio's return from the war, in the slow secion of Beatrice's superbly tormented but triumphant confession of her feelings, in the brio of the brilliant aria in which Benedict declares his intention to be 'horribly in love.' in the final duet where, against the famous triplet theme of the overture, they decide in racy cross-rhythms that pour aujourcl'hui la trove est signee, nous revien- drons ennemis detain, even in the drink- ing chorus (accompanied characteristically by cornets and guitars only), and most of all in the heavenly nocturne-duet for Hero and her maid Ursula, Nuit paisible et sereine, in which Berlioz found music almost to out-night the beauties of the Adagio in Romeo and the love duet in The Trojans, 'Nuit d'ivresse et d'extase.' It is hard to see how Sadler's Wells can fail to take the hint dropped so resoundingly on their doorstep; nor how Glyndebourne will not speedily realise that Beatrice is made for a green and golden summer evening in Sussex.