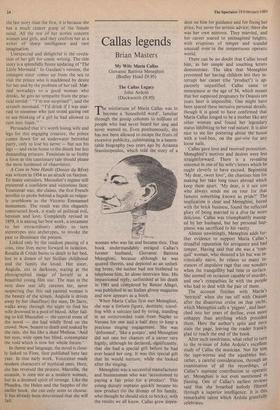 The misfortune of Maria Callas was to become a 'household word', familiar through the gossip columns to millions of people who had never heard her sing and never wanted to. Even posthumously, she has not been allowed to escape the fruits of excessive publicity, culminating in a lamen- table biography two years ago by Arianna Stassinopoulos, which told the story of a

woman who was fat and became thin. That book understandably enraged Callas's former husband, Giovanni Battista Meneghini, because although he was quoted therein, and depicted as an unfeel- ing brute, the author had not bothered to telephone him, let alone interview him. His impassioned reply, unfinished at his death in 1981 and completed by Renzo' Allegri, was published in an Italian glossy magazine and now appears as a book.

When Maria Callas first met Meneghini, she was a forlorn figure, destitute, travel- ling with a suitcase tied by string, standing in an overcrowded train from Naples to Verona for one and a half days to keep a precious singing engagement. She was 'deformed', 'like a potato', and Meneghini did not rate her chances of a career very highly, although he declared, significantly, that she had a special gift before he had ever heard her sing. It was this special gift that he would nurture, while she looked after the singing.

Meneghini was a successful manufacturer and businessman who was 'accustomed to paying a fair price for a product'. This young dumpy soprano quickly became his new product (to the dismay of his family, who thought he should stick to bricks), with the results we all know. Callas grew depen-

dent on him for guidance and for fixing her price, but never for artistic advice; there she was her own mistress. They married, and her career soared to unimagined heights, with eruptions of temper and scandal unusual even' in the tempestuous operatic world.

There can be no doubt that Callas loved him, as her simple and touching letters demonstrate. The idea that Meneghini prevented her having children lest they in- terrupt her career (the 'product') is ap- parently unjustified. Callas came to menopause at the age of 34, which means that her supposed pregnancy by Onassis ten years later is impossible. One might have been spared these intrusive personal details, though it is good to have confirmed that Maria Callas longed to be a mother like any other woman and found her legendary status inhibiting to her real nature. It is also nice to see her pottering about the house with a tool-box, on the qui-vive for any loose nails.

Callas gave love and received protection. Meneghini's motives and desires were less straightforward. There is a revealing sentence in one of his wife's letters which he ought cleverly to have excised. Beginning 'My dear, sweet love', she chastises him for making her take long tours abroad which keep them apart. 'My dear, is it not you who always sends me on tour for that famous something known as pride?' The implication is clear and Meneghini, bored with the brick business, found the reflected glory of being married to a diva far more delicious. Callas was triumphantly manag- ed by her husband, but her personal hap- piness was sacrificed to his vanity.

Almost unwittingly, Meneghini adds fur- ther evidence to support Maria Callas's dreadful reputation for arrogance and bad temper. Having said that she was a 'tran- quil' woman, who shouted a lot but was in- trinsically naive, he relates so many in- stances of impulsive rage that one wonders when the tranquillity had time to surface. She seemed on occasion capable of murder, and one's sympathies lie with the people who had to deal with the pair of them.

The account finishes with Maria's 'betrayal' when she ran off with Onassis after the disastrous cruise on that yacht, which Meneghini calls a 'pigpen', and laun- ched into her years of decline, even more unhappy than anything which preceded them. Here the author's spite and envy stain the page, leaving the reader franklY glad to reach the end of the book.

After such tawdriness, what relief to turn to the re-issue of John Ardoin's excellent study of Callas the musician. Not for him the tape-worms and the squabbles but, rather, a careful consideration, through an examination of all the recordings, of Callas's supreme contribution to operatic art. Meneghini is not even mentioned in passing. One of Callas's earliest. reviews said that she breathed melody filtered through a superior intelligence. It is this remarkable talent which Ardoin gratefully celebrates.