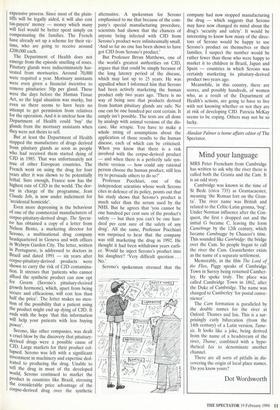 MRS Peter Frencham from Cambridge has written to ask why the river there is called both the Granta and the Cam. It is an odd story.

Cambridge was known in the time of St Bede (circa 735) as Grantacaester, meaning 'the Roman fort on the Gran- ta'. The river name was British and related to the Celtic-Latin gronna, 'bog'. Under Norman influence after the Con- quest, the first r dropped out and the initial G became C, leaving the form Cantebruge by the 12th century, which became Cambrugge by Chaucer's time. This sounded like Cambridge: the bridge over the Cam. So people began to call the river the Cam. Grantchester exists as the name of a separate settlement.

The Cam formation is paralleled by the double names for the river at Oxford: Thames and Isis. This is a sur- prisingly early bifurcation (from the 14th century) of a Latin version, Tame- sis. It looks like a joke, being derived from the name of a headstream of the river, Thame, combined with a hypo- thetical Isis to denominate another channel.

There are all sorts of pitfalls in dis- covering the origin of local place names. Do you know yours?