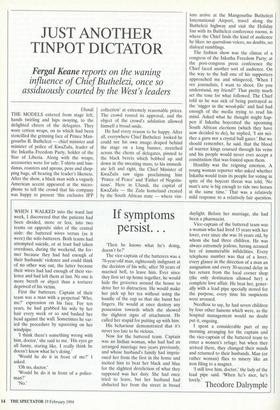 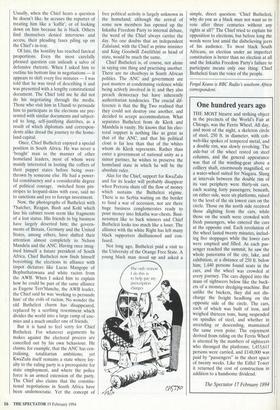 Fergal Keane reports on the waning

influence of Chief Buthelezi, once so assiduously courted by the West's leaders

Ulundi THE MODELS entered from stage left, hands twirling and hips swaying, to the delighted cheers of the delegates. They wore cotton wraps, on to which had been stencilled the grinning face of Prince Man- gosuthu B. Buthelezi — chief minister and minister of police of KwaZulu, leader of the Inkatha Freedom Party, holder of the Star of Liberia. Along with the wraps, accessories were for sale: T-shirts and ban- danas, coasters and aprons, pens and shop- ping bags, all bearing the leader's likeness. After the show, a black man with a vaguely American accent appeared at the micro- phone to tell the crowd that his company was happy to present 'this exclusive IFP

collection' at extremely reasonable prices. The crowd roared its approval, and the object of the crowd's adulation allowed himself a broad smile.

He had every reason to be happy. After all, everywhere Chief Buthelezi looked he could see his own image: draped behind the stage on a long banner, stretched across the chests of delegates, pinned to the black berets which bobbed up and down in the sweating mass; to his immedi- ate left and right, the Chief Minister of KwaZulu saw signs proclaiming him `Prince of Peace' and 'Father of Negotia- tions'. Here in Ulundi, the capital of KwaZulu — the Zulu homeland created by the South African state — where visi- tors arrive at the Mangosuthu Buthelezi International Airport, travel along the Buthelezi highway and visit the Holiday Inn with its Buthelezi conference rooms, is where the Chief finds the kind of audience he likes: no querulous voices, no doubts, no disloyal rumblings.

The fashion show was the climax of a congress of the Inkatha Freedom Party; at the post-congress press conference the Chief faced another sort of audience. On the way to the hall one of his supporters approached me and whispered, 'When I see journalists, I want to shoot. Do you understand, my friend?' That pretty much set the tone for what followed. The Chief told us he was sick of being portrayed as the 'nigger in the wood-pile' and had had enough of the media trying to read his mind. Asked what he thought might hap- pen if Inkatha boycotted the upcoming South African elections (which they have now decided to do), he replied, 'I am nei- ther a guru nor a crystal ball gazer.' But we should remember, he said, that the blood of warrior kings coursed through his veins and his people would never ever accept a constitution that was foisted upon them.

Hostility was the reigning emotion. A young woman reporter who asked whether Inkatha would train its people for voting in spite of the boycott threat was told, 'No man's arse is big enough to ride two horses at the same time.' That was a relatively mild response to a relatively fair question. Usually, when the Chief hears a question he doesn't like, he accuses the reporter of treating him like a `kaffir', or of looking down on him because he is black. Others find themselves denied interviews and access, their pleading faxes piling up on the Chief's in-tray.

Of late, the hostility has reached farcical proportions. Even the most carefully phrased question can unleash a salvo of defensive rhetoric. When I asked him to outline his bottom line in negotiations — it appears to shift every five minutes — I was told that he was tired of describing it and was presented with a lengthy constitutional document. The Chief told me he did not do his negotiating through the media.

Those who visit him in Ulundi to persuade him to participate in the elections are pre- sented with similar documents and subject- ed to long, self-justifying diatribes, as a result of which diplomats and correspon- dents alike dread the journey to the home- land capital.

Once, Chief Buthelezi enjoyed a special position in South Africa. He was never a `bought' man in the manner of other homeland leaders, most of whom were mainly interested in looting the coffers of their puppet states before being over- thrown by someone else. He had a power- ful constituency and a considerable degree of political courage, switched from pin- stripes to leopard-skins with ease, said no to sanctions and yes to foreign investment.

Now, the photographs of Buthelezi with Thatcher, Reagan, Bush and Kohl which line his cabinet room seem like fragments of a lost status. His friends in big business have largely deserted him; the govern- ments of Britain, Germany and the United States, among others, have shifted their attention almost completely to Nelson Mandela and the ANC. Having once imag- ined himself a future president of South Africa, Chief Buthelezi now finds himself boycotting the elections in alliance with tinpot dictators like Lucas Mangope of Bophuthatswana and white racists from the AWB. When I asked him to explain how he could be part of the same alliance as Eugene Terr'blanche, the AWB leader, the Chief said he was 'working to persuade him' of the evils of racism. No wonder the old Buthelezi charm has disappeared, replaced by a seething resentment which divides the world into a large camp of ene- mies and a much smaller one of friends. But it is hard to feel sorry for Chief Buthelezi. For whatever arguments he makes against the electoral process are cancelled out by his own behaviour. He claims, for example, that the ANC has cen- tralising, totalitarian ambitions; yet KwaZulu itself remains a state where loy- alty to the ruling party is a prerequisite for state employment, and where the police force is an armed extension of the party. The Chief also claims that the constitu- tional negotiations in South Africa have been undemocratic. Yet the concept of free political activity is largely unknown in the homeland; although the arrival of some new members has opened up the Inkatha Freedom Party to internal debate, the word of the Chief always carries the day. No one doubts that an independent Zululand, with the Chief as prime minister and King Goodwill Zwelithini as head of state, would be much the same.

Chief Buthelezi is, of course, not alone in saying one thing and practising another. There are no choirboys in South African politics. The ANC and government are past masters at condemning violence while being actively involved in it; and they also preach democracy but have inherently authoritarian tendencies. The crucial dif- ference is that the Big Two realised that they could not destroy one another, and decided to accept accommodation. What separates Buthelezi from de Klerk and Mandela is vanity. He knows that his elec- toral support is nothing like as great as that of the ANC, and that his political clout is far less than that of the whites whom de Klerk represents. Rather than enter a government of national unity as a minor partner, he wishes to preserve the homeland state in which he will be the absolute ruler.

Alas for the Chief, support for KwaZulu and for its leader will probably disappear when Pretoria shuts off the flow of money which sustains the Buthelezi regime. There is no Serbia waiting on the border to fund a war of secession, nor are there huge business conglomerates ready to pour money into Inkatha war-chests. Busi- nessmen like to back winners and Chief Buthelezi looks too much like a loser. The alliance with the white Right has left many black supporters disillusioned and con- fused.

Not long ago, Buthelezi paid a visit to the University of the Orange Free State. A young black man stood up and asked a simple, direct question: 'Chief Buthelezi, why do you as a black man not want us to vote after three centuries without any rights at all?' The Chief tried to explain his opposition to elections, but before long the words were lost amid the disbelieving jeers of his audience. To most black South Africans, an election under an imperfect constitution is better than no election at all and the Inkatha Freedom Party's failure to participate means only one thing: Chief Buthelezi fears the voice of the people.