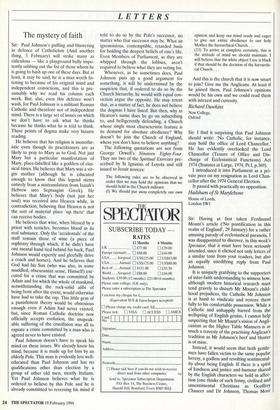 LETTERS The mystery of faith

Sir: Paul Johnson's puffing and blustering in defence of Catholicism (And another thing, 5 February) will strike many as ridiculous — like a playground bully impo- tently sobbing out the list of those whom he is going to bash up one of these days. But at least, it may be said, he is a man worth lis- tening to because of his original mind and independent convictions, and this is pre- sumably why we read his column each week. But, alas, even this defence won't wash, for Paul Johnson is a militant Roman Catholic and therefore not of independent mind. There is a large set of issues on which we don't have to ask what he thinks because he thinks what he is told to think. These points of dogma make very bizarre reading.

He believes that his religion is monothe- istic even though its practitioners are as likely to pray to Mary as to God. Not just Mary but a particular manifestation of Mary, place-labelled like a goddess of clas- sical times. He believes that Mary was a vir- gin mother (although he is educated enough to know that this legend stems entirely from a mistranslation from Isaiah's Hebrew into Septuagint Greek). He believes that Mary's body (not just her soul) was received into Heaven while, in contradiction, believing that Heaven is not the sort of material place 'up there' that can receive bodies.

He believes that wine, when blessed by a priest with testicles, becomes blood in its real substance. Only the 'accidentals' of the stuff remain those of wine (a piece of sophistry through which, if he didn't have one mental hand tied behind his back, Paul Johnson would expertly and gleefully drive a coach and horses). And he believes that God had his Son (who was also, in some muddled, obscurantist sense, Himself) exe- cuted for a crime that was committed by Adam and for which the whole of mankind, notwithstanding the rock-solid alibi of being born after the event, would otherwise have had to take the rap. This little gem of a punishment theory would be obnoxious enough even if Adam had never existed, but, since Roman Catholic doctrine now officially accepts evolution, the unspeak- able suffering of the crucifixion was all to expiate a crime committed by a man who is agreed never to have existed.

Paul Johnson doesn't have to speak his mind on these issues. We already know his mind, because it is made up for him by an elderly Pole. This man is evidently less well- educated than Paul Johnson and has no qualifications other than election by a group of other old men, mostly Italians. Yet Paul Johnson believes what he is ordered to believe by this Pole and he is already committed to reversing his mind if told to do so by the Pole's successor, no matter who that successor may be. What an ignominious, contemptible, retarded basis for holding the deepest beliefs of one's life. Even Members of Parliament, as they are whipped through the lobbies, aren't required to believe what they are voting for.

Whenever, as he sometimes does, Paul Johnson puts up a good argument for something, it will be undermined by the suspicion that, if ordered to do so by the Church hierarchy, he would with equal con- viction argue the opposite. He may retort that, as a matter of fact, he does not believe the dogmas I have listed. But then, why in Heaven's name does he go on subscribing to, and belligerently defending, a Church whose single most characteristic feature is its demand for absolute obedience? Why doesn't he join the Church of England, where you don't have to believe anything?

The following quotations are not from George Orwell's Nineteen Eighty-Four. They are two of the Spiritual Exercises pre- scribed by St Ignatius of Loyola and still issued to Jesuit novices:

The following rules are to be observed in order that we may hold the opinions that we should hold in the Church militant: (I) We should put away completely our own opinion and keep our mind ready and eager to give our entire obedience to our holy Mother the hierarchical Church . . .

(13) To arrive at complete certainty, this is the attitude of mind we should maintain: I will believe that the white object I see is black if that should be the decision of the hierarchi- cal Church . . .

And this is the church that it is now smart to join? Give me the Anglicans. At least if he joined them, Paul Johnson's opinions would be his own and we could read them with interest and curiosity.