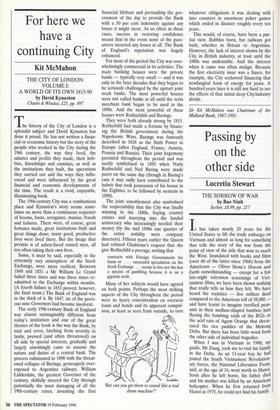 For here we have a continuing City

THE CITY OF LONDON: VOLUME I: A WORLD OF ITS OWN 1815-90 by David Kynaston Chatto & Windus, f25, pp. 497 The history of the City of London is a splendid subject and David Kynaston has done it proud. He has not written a finan- cial or economic history but the story of the people who worked in the City during the 19th century, the way they lived, the salaries and profits they made, their hob- bies, friendships and enmities, as well as the institutions they built, the operations they carried out and the ways they influ- enced and were influenced by the great financial and economic developments of the time. The result is a vivid, enjoyable, illuminating book.

The 19th-century City was a rumbustious place and Kynaston's story seems some- times no more than a continuous sequence of booms, busts, arrogance, manias, frauds and failures. There were, of course, great fortunes made, great institutions built and great things done; many good, productive lives were lived there. But the image that persists is of ashen-faced ruined men, all too often taking their own lives.

Some, it must be said, especially in the extremely racy atmosphere of the Stock Exchange, were more resilient. Between 1848. and 1851 a Mr William Le Grand failed three times and was three times re- admitted to the Exchange within months. (A fourth failure in 1853 proved, however, the final straw.) The Bank of England was in the thick of it. By 1847, six of the previ- ous nine Governors had become insolvent.

The early 19th-century Bank of England was almost unimaginably different from today's institution and one of the great themes of the book is the way the Bank, by trial and error, lurching from severity to laxity, pressed (and often threatened) on all side by special interests, gradually and largely unwittingly came to assume the nature and duties of a central bank. The process culminated in 1890 with the threat- ened collapse of Barings, grotesquely over- exposed to Argentine railways. William Lidderdale, the greatest Governor of the century, skilfully steered the City through potentially the most damaging of all the 19th-century crises, inventing the first

financial lifeboat and persuading the gov- ernment of the day to provide the Bank with a 50 per cent indemnity against any losses it might incur. As so often in these cases, success in restoring confidence meant that in the event none of the guar- antors incurred any losses at all. The Bank of England's reputation was hugely enhanced.

For most of the period the City was over- whelmingly commercial in its activities. The main banking houses were the private banks — typically very small — and it was only in the later decades that they began to be seriously challenged by the upstart joint stock banks. The most powerful houses were not called banks at all until the term merchant bank began to be used in the 1890s. And the most powerful of these houses were Rothschilds and Barings.

They were both already strong by 1815. Rothschild had made a fortune by financ- ing the British government during the Napoleonic Wars. Barings was famously described in 1818 as the Sixth Power in Europe (after England, France, Austria, Prussia and Russia). Their joint hegemony persisted throughout the period and was neatly symbolised in 1885 when Natty Rothschild and Ned Baring were made peers on the same day (though in Baring's case it may sadly have contributed to the hubris that took possession of his house in the Eighties, to be followed by nemesis in 1890).

The joint ennoblement also symbolised the respectability that the City was finally winning in the 1880s, buying country estates and marrying into the landed aristocracy who increasingly needed their money (by the mid 1890s one quarter of the entire nobility were company directors). Fifteen years earlier the Queen had refused Gladstone's request that she give Rothschild a peerage, writing that

contracts with Foreign Governments for loans or . . successful speculation on the Stock Exchange ... seems to her not the less a species of gambling because it is on a gigantic scale.

Many of her subjects would have agreed on both points. Perhaps the most striking aspects of the City throughout the period were its heavy concentration on overseas loans and bonds and its apparent compul- sion, at least as seen from outside, to turn

`But can you get them to sound like a real drum machine?'

whatever obligations it was dealing with into counters in enormous poker games which ended in disaster roughly every ten years.

This would, of course, have been a par- tial view. Bubbles burst, but railways got built, whether in Britain or Argentina. However, the lack of interest shown by the City in British industry, at least until the 1880s was undeniable. And the interest when it came was often malign. Because the first electricity issue was a fiasco, for example, the City eschewed financing that newfangled form of energy for years. A hundred years later it is still not hard to see the effects of that initial deep City/industry divide.