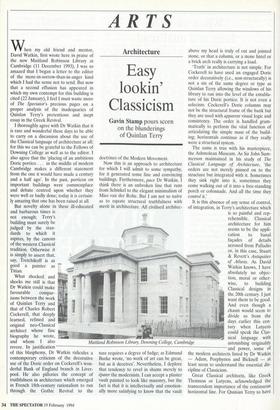 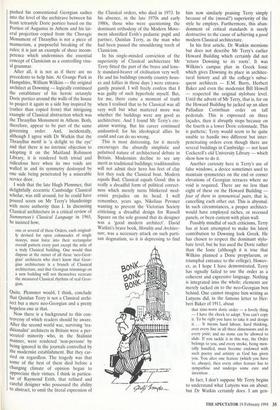 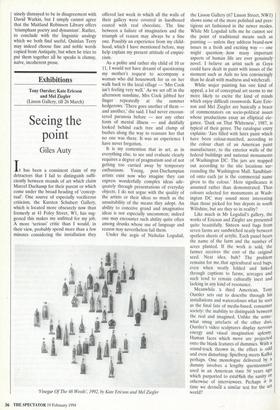 Gavin Stamp pours scorn on the blunderings of Quinlan Terry

When my old friend and mentor, David Watkin, first wrote here in praise of the new Maitland Robinson Library at Cambridge (11 December 1993), I was so

amazed that I began a letter to the editor of the more-in-sorrow-than-in-anger kind which I had the sense not to send. But now

that a second effusion has appeared in which my own contempt for this building is cited (22 January), I feel I must waste more of The Spectator's precious pages on a proper analysis of the inadequacies of Quinlan Terry's pretentious and inept essay in the Greek Revival.

I thoroughly agree with Dr Watkin that it is rare and wonderful these days to be able to carry on a discussion about the use of the Classical language of architecture at all; for this we can be grateful to the Fellows of Downing College as well as to the editor. I also agree that the 'placing of an ambitious Doric portico . . . in the middle of modern Cambridge makes a different statement from the one it would have made a century and a half ago'. In the past, porticos on important buildings were commonplace and debate centred upon whether they were well or badly done; today it is certain- ly amazing that one has been raised at all.

But novelty alone in these ill-educated and barbarous times is not enough; Terry's building must surely be judged by the stan- dards to which it aspires, by the canons of the western Classical tradition. Otherwise it is simply to assert that, say, Tretchikoff is as good a painter as Titian.

What shocked and shocks me still is that Dr Watkin could make doctrines of the Modern Movement.

Now this is an approach to architecture for which I will admit to some sympathy, for it generated some fine and convincing buildings. Furthermore, pace Dr Watkin, I think there is an unbroken line that runs from Schinkel to the elegant minimalism of Mies van der Rohe. But I am not so naive as to equate structural truthfulness with merit in architecture. All civilised architec- Maitland RobinsonRobinson Library, Downing College, Cambridge ture requires a degree of fudge; as Edmund Burke wrote, `no work of art can be great, but as it deceives'. Nevertheless, I deplore that tendency to revel in shams merely to epater the modernists. I can accept a plaster vault painted to look like masonry, but the fact is that it is intellectually and emotion- ally more satisfying to know that the vault

above my head is truly of cut and jointed stone, or that a column, or a stone lintel or a brick arch really is carrying a load.

`Truth' in architecture is not simple. For Cockerel! to have used an engaged Doric order decoratively (i.e., non-structurally) is not a sin of the same degree or type as Quinlan Terry allowing the windows of his library to run into the level of the entabla- ture of his Doric portico. It is not even a solecism. Cockerell's Doric columns may not be the structural frame of the bank but they are used with apparent visual logic and consistency. The order is handled gram- matically to perform the vital function of articulating the simple mass of the build- ing; horizontals continue as if they really were a structural system.

The same is true with his masterpiece, the Ashmolean Museum. As Sir John Sum- merson maintained in his study of The Classical Language of Architecture, 'the orders are not merely pinned on to the structure but integrated with it. Sometimes they sink right into it, sometimes they come walking out of it into a free-standing porch or colonnade. And all the time they control it.'

Great Classical architects, like Greek Thomson or Lutyens, acknowledged the transcendent importance of the continuous horizontal line. For Quinlan Terry to have pushed his conventional Georgian sashes into the level of the architrave between his front tetrastyle Doric portico based on the Portico of Augustus in Athens and his lat- eral projection copied from the Choragic Monument of Thrasyllus is not a piece of mannerism, a purposeful breaking of the rules; it is just an example of sheer incom- petence which undermines the essential concept of Classicism as a controlling visu- al grammar.

After all, it is not as if there are no precedents to help him. At Grange Park in Hampshire, William Wilkins — the original architect at Downing — logically continued the entablature of his heroic octastyle Doric portico around the walls of the house to project it again in a side bay inspired by (rather than copied from) that intriguing example of Classical abstraction which was the Thrasyllus Monument in Athens. Both, therefore, appear to be part of the same governing order. And, incidentally, although I agree with Dr Watkin that the Thrasyllus motif is `a delight to the eye' and that there is no intrinsic objection to adopting it on the Maitland Robinson Library, it is rendered both trivial and ridiculous here when its two voids are walled in and its symmetry destroyed by one side being penetrated by a miserable service door.

I wish that the late Hugh Plommer, that delightfully eccentric Cambridge Classical scholar, was still around, for he could have poured scorn on Mr Terry's blunderings with more authority than I. In discussing Classical architecture in a critical review of Summerson's Classical Language in 1965, he insisted how, one or several of these Orders, each original- ly devised for open colonnades of single storeys, must force into their rectangular overall pattern every part except the attic of a truly Classical building. One would thus dispose at the outset of all those `neo-Geor- gian' architects who don't know that Geor- gian architecture is a branch of Classical architecture, and that Georgian trimmings on a new building will not themselves recreate the measured Classical rhythms of real Geor- gian.

Quite. Plommer would, I think, conclude that Quinlan Terry is not a Classical archi- tect but a mere neo-Georgian and a pretty hopeless one at that.

Now there is a background to this con- troversy of which readers should be aware.

After the second world war, surviving 'tra- ditionalist' architects in Britain were a per- secuted. minority who, in the Stalinist manner, were rendered 'non-persons' by being ignored in the journals controlled by the modernist establishment. But they car- ried on regardless. The tragedy was that some of the best of them died before a changing climate of opinion began to appreciate their virtues. I think in particu- lar of Raymond Erith, that refined and careful designer who possessed the ability to abstract, to omit the literal expression of

the Classical orders, who died in 1973. In his absence, in the late 1970s and early 1980s, those who were questioning the dominant orthodoxy of the Modern Move- ment identified Erith's pedantic pupil and partner, Quinlan Terry, as the man who had been passed the smouldering torch of Classicism.

In his single-minded conviction of the superiority of Classical architecture Mr Terry fitted the part of the brave and lone- ly standard-bearer of civilisation very well. He and his buildings (mostly country hous- es and follies in those days ) were extrava- gantly praised. I will freely confess that I was guilty of such hyperbole myself. But, for me, there came a moment of truth when I realised that to be Classical was all very well but what mattered more was whether the buildings were any good as architecture. And I found Mr Terry's cre- ations wanting. But his career continued undaunted; for his ideological allies he could and can do no wrong.

This is most distressing, for it merely encourages the absurdly simplistic and polarised nature of architectural debate in Britain. Modernists decline to see any merit in traditional buildings; traditionalists will not admit their hero has feet of clay lest they rock the Classical boat. Modern equals Bad; Classical equals Good: this is really a dreadful form of political correct- ness which merely turns blinkered mod- ernist prejudice on its head. I well remember, years ago, Nikolaus Pevsner wanting to prevent the Victorian Society criticising a dreadful design for Russell Square on the sole ground that its designer was a 'good modern architect'. David Watkin's brave book, Morality and Architec- ture, was a necessary attack on such parti- san dogmatism, so it is depressing to find him now similarly praising Terry simply because of the (moral?) superiority of the style he employs. Furthermore, this aban- donment of critical standards is surely destructive to the cause of achieving a good modern Classical architecture.

In his first article, Dr Watkin mentions but does not describe Mr Terry's earlier Howard Building which certainly did not `return Downing to its • roots'. It was Wilkins's campus plan in Greek Ionic which gives Downing its place in architec- tural history and all the college's subse- quent architects — E.M. Barry, Herbert Baker and even the modernist Bill Howell — respected the original stylobate level. Until the advent of Mr Terry, that is, for on the Howard Building he jacked up an alien Palladian Corinthian order on tall pedestals. This is expressed on three façades, then it abruptly stops because on the fourth is a lower Doric colonnade. This is pathetic; Terry would seem to be quite unable to handle two different but inter- penetrating orders even though there are several buildings in Cambridge — not least Cockerell's old University Library — which show how to do it.

Another curiosity here is Terry's use of false windows, a device sometimes used to maintain symmetries on the end or corner elevations of Georgian terraces where no void is required. There are no less than eight of these on the Howard Building four of them in symmetrical pairs, that is, cancelling each other out. This is abysmal. In such circumstances, a proper architect- would have employed niches, or recessed panels, or been content with plain wall.

Possibly mindful of such criticisms, Terry has at least attempted to make his latest contribution to Downing look Greek. He has chosen to respect the dominant stylo- bate level, but he has used the Doric rather than the Ionic (although it is true that Wilkins planned a Doric propylaeum, or triumphal entrance to the college). Howev- er, as I hope I have demonstrated, Terry has signally failed to use the order as a coherent and expressive language. Nothing is integrated into the whole; elements are merely tacked on to the neo-Georgian box behind. One cannot imagine him writing as Lutyens did, in the famous letter to Her- bert Baker of 1911, about

that time-worn doric order — a lovely thing — I have the cheek to adopt. You can't copy it. To be right you have to take it and design it. .. It means hard labour, hard thinking, over every line in all three dimensions and in every joint; and no stone can be allowed to slide. If you tackle it in this way, the Order belongs to you, and every stroke, being men- tally handled, must become endowed with such poetry and artistry as God has given you. You alter one feature (which you have to, always), then every other feature has to sympathise and undergo some care and invention . .

In fact, I don't suppose Mr Terry begins to understand what Lutyens was on about; but Dr Watkin certainly does. I am gen- uinely dismayed to be in disagreement with David Watkin, but I simply cannot agree that the Maitland Robinson Library offers 'triumphant poetry and dynamism'. Rather, to conclude with the linguistic analogy which we both find useful, Quinlan Terry may indeed choose fine and noble words copied from Antiquity, but when he tries to put them together all he speaks is clumsy, naïve, incoherent prose.