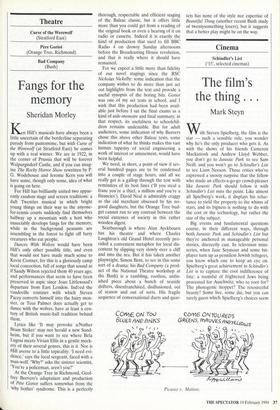 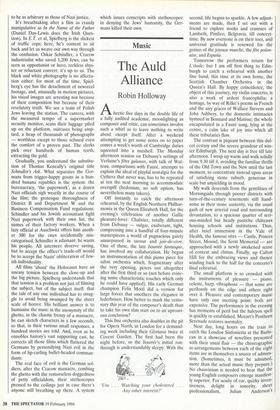 With Steven Spielberg, the film is the star — such a sensible rule, you wonder why he's the only producer who gets it. As with the shows of his friends Cameron Mackintosh and Andrew Lloyd Webber, you don't go to Jurassic Park to see Sam Neill; and you won't go to Schindler's List to see Liam Neeson. Those critics who've expressed a snooty surprise that the fellow who made an effects-a-go-go crowd-pleaser like Jurassic Park should follow it with Schindler's List miss the point. Like almost all Spielberg's work, it displays his reluc- tance to yield the property to the whims of stars, and its bigness is nothing to do with the cost or the technology, but rather the size of the subject.

Big events and fundamental questions course, in their different ways, through both Jurassic Park and Schindler's List but they're anchored in manageable personal stories, discreetly cast. In television mini- series, when Jane Seymour and some bit- player turn up as penniless Jewish refugees, you know which one to keep an eye on. Spielberg's great achievement in Schindler's List is to capture the cool indifference of fate: a roomful of frightened Jews being processed for Auschwitz; who to root for? The photogenic moppet? The resourceful beauty? Some live, some die, but you can rarely guess which. Spielberg's choices seem Picasso v. Matisse. to be as arbitrary as those of Nazi justice.

It's breathtaking after a film as crassly manipulative as In the Name of the Father (Daniel Day-Lewis does the Irish Ques- tion). In E.T. et al, Spielberg is the slickest of traffic cops; here, he's content to sit back and let us weave our own way through

the confusion. Oskar Schindler, a Cracow industrialist who saved 1,200 Jews, can be seen as opportunist or hero, reckless shys- ter or reluctant convert: it's up to us. The black and white photography is no affecta- tion either: for most of the time, Spiel- berg's eye has the detachment of newsreel footage, and, unusually in motion pictures, his visual images are arresting not because of their composition but because of their revelatory truth. We see a train of Polish Jews leaving the station. The camera, with the measured tempo of a supermarket security monitor, scans their luggage piled up on the platform, suitcases being emp-

tied, a heap of thousands of photographs — worthless except to those refused even

the comfort of a proven past. The clerks pick over hundreds of human teeth, extracting the gold.

Schindler's Ark. What separates the Ger-

mans from trigger-happy goons in a hun- dred banana republics is the system: the bureaucracy, 'the paperwork', as a dozen Nazi officials sigh wearily in the course of the film; the grotesque thoroughness of District B and Department W and the Business Compensation Fund regulations. Schindler and his Jewish accountant fight Nazi paperwork with their own list, the names of their factory workers. When a lazy official at Auschwitz offers him anoth- er 300 for the ones accidentally mis- categorised, Schindler is adamant: he wants his people. All internees deserve saving, but to accept the officer's trade-off would be to accept the Nazis' obliteration of Jew- ish individuality.

All films 'about' the Holocaust have an uneasy tension between the close-up and the big picture. Spielberg understands that that tension is a problem not just of filming the subject, but of the subject itself: that the tale of any one individual has to strug- gle to avoid being swamped by the sheer scale of horror. His brilliant answer is to humanise the mass: in the anonymity of the ghetto, in the chaotic frenzy of a massacre, he can sketch characters in a few seconds, so that, in their various small responses, a hundred stories are told. And, even as he ennobles history's vast supporting cast, he corrects all those films which flattered the Germans by personifying Nazi evil in the form of lip-curling bullet-headed comman- dants.

The real face of evil is the German sol- diers, after the Cracow massacre, combing the ghetto with the remorseless doggedness of petty officialdom, their stethoscopes pressed to the ceilings just in case there's anyone still breathing up there. A system which issues conscripts with stethoscopes: in denying the Jews' humanity, the Ger- mans killed their own.