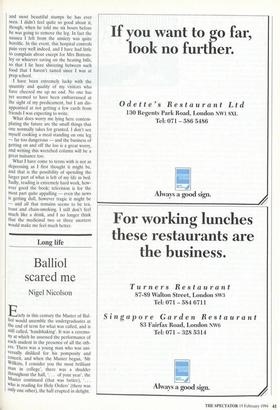 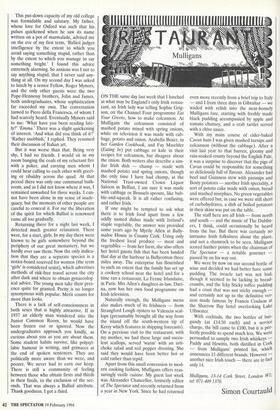 . arly in this century the Master of Bal-

1101 would assemble the undergraduates at the end of term for what was called, and is still called, 'handshaking'. It was a ceremo- ny at which he assessed the performance of each student in the presence of all the oth- ers. There was a young man who was uni- versally disliked for his pomposity and conceit, and when the Master began, `Mr Wilkins, I consider you the most brilliant man in college', there was a shudder throughout the hall, '. . . of your year', the Master continued (that was better), '. . . who is reading for Holy Orders' (there was only one other), the hall erupted in delight.

This put-down capacity of my old college was formidable and salutary. My father, whose love for Oxford was such that his pulses quickened when he saw its name written on a pot of marmalade, advised me

on the eve of my first term, `Balliol judges intelligence by the extent to which you avoid saying something stupid, rather than by the extent to which you manage to say something bright.' I found this advice extremely alarming. So anxious was I not to say anything stupid, that I never said any- thing at all. On my second day I was asked to lunch by a senior Fellow, Roger Mynors, and the only other guests were the two Pope-Hennessy brothers, John and James, both undergraduates, whose sophistication far exceeded my own. The conversation turned to Piero della Francesca, of whom I had scarcely heard. Eventually Mynors said to me: 'What have you been reading late- ly?' Emma.' There was a slight quickening of interest. 'And what did you think of it?' 'Rather snobbish,' I replied. They resumed their discussion of Italian art.

But it was worse than that. Being very shy, I had no friends. I would sit in my room banging the coals of my reluctant fire with a poker, and envying men whom I could hear calling to each other with greet- ing or ribaldry across the quad. At that period there was only one communal bath- room, and as I did not know where it was, I remained unwashed for three weeks. I can- not have been alone in my sense of inade- quacy, but the memoirs of other people are careful to conceal it. For me the liberation of the spirit for which Balliol is renowned came all too gradually.

Returning there for a night last week, I detected much greater relaxation. There were, for a start, girls. In my day there were known to be girls somewhere beyond the periphery of our great monastery, but we hardly ever saw them. Now the only indica- tion that they are a separate species is a notice-board reserved for women (the term 'girls' is considered sexist), which advertises methods of risk-free travel across the city after dark and where to obtain gynaecolog- ical advice. The young men take their pres- ence quite for granted. Pretty is no longer synonymous with popular. Merit counts for more than looks.

There is a lack of self-consciousness in both sexes that is highly attractive. If in 1937 an elderly man wandered into the Junior Common Room, he would have been frozen out or ignored. Now the undergraduates approach you kindly, as curious about you as you are about them. Some student habits survive, like polysyl- labic humour in writing, and grimaces at the end of spoken sentences. They are politically more aware than we were, and poorer. We never had to earn our keep. There is still a community of feeling between those who obtain firsts and thirds in their finals, to the exclusion of the sec- onds. That was always a Balliol attribute. Thank goodness. I got a third.