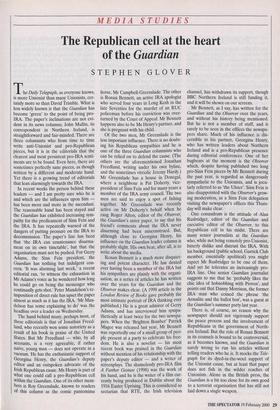 The Republican cell at the heart of the Guardian

The Daily Telegraph, as everyone knows, is more Unionist than many Unionists, cer- tainly more so than David Trimble. What is less widely known is that the Guardian has become 'green' to the point of being pro- IRA. The paper's inclinations are not evi- dent in its news columns; John Mullin, its correspondent in Northern Ireland, is straightforward and fair-minded. There are three columnists who from time to time write anti-Unionist and pro-Republican pieces, but it is in the editorials that the clearest and most persistent pro-IRA senti- ments are to be found. Even here, there are sometimes perfectly sane pieces, as though written by a different and moderate hand. Yet there is a growing trend of editorials that lean alarmingly towards the IRA.

In recent weeks the person behind these leaders — and I am pretty sure who he is and which are the influences upon him has been more and more in the ascendant. The reasonable hand has been stayed and the Guardian has exhibited increasing sym- pathy for the predicament of Sinn Fein and the IRA. It has repeatedly warned of the dangers of putting pressure on the IRA to decommission. The paper's line has been that 'the IRA can countenance disarma- ment on its own timetable', but that the organisation must not be pushed. For Gerry Adams, the Sinn Fein president, the Guardian has nothing but indulgent con- cern. 'It was alarming last week,' a recent editorial ran, 'to witness the exhaustion in Mr Adams's voice as he wondered how long he could go on being the messenger who continually gets shot.' Peter Mandelson's re- imposition of direct rule has upset the paper almost as much as it has the IRA. 'Mr Man- delson has some explaining to do' was the headline over a leader on Wednesday.

The hand behind many, perhaps most, of these editorials is that of Jonathan Freed- land, who recently won some notoriety as a result of his book in praise of the United States. But Mr Freedland — who, by all accounts, is a very agreeable, if rather naive, young man — does not operate in a vacuum. He has the enthusiastic support of Georgina Henry, the Guardian's deputy editor and an outspoken advocate of the Irish Republican cause. Ms Henry is part of what one could call a pro-Republican cell within the Guardian. One of its other mem- bers is Roy Greenslade, known to readers of this column as the comic pantomime horse, Mr Campbell-Greenslade. The other is Ronan Bennett, an active IRA apologist who served four years in Long Kesh in the late Seventies for the murder of an RUC policeman before his conviction was over- turned by the Court of Appeal. Mr Bennett happens also to be Ms Henry's partner, and she is pregnant with his child. Of the two men, Mr Greenslade is the less important influence. There is no doubt- mg his Republican sympathies and he is one of the three Guardian columnists who can be relied on to defend the cause. (The others are the aforementioned Jonathan Freedland, writing under his own byline, and the sometimes vitriolic Jeremy Hardy.) Mr Greenslade has a house in Donegal, where a neighbour is Pat Doherty, vice- president of Sinn Fein and for many years a member of the IRA army council. The two men are said to enjoy a spot of fishing together. Mr Greenslade was recently active on Mr Doherty's behalf when he rang Roger Alton, editor of the Observer, the Guardian's sister paper, to say that his friend's comments about the IRA never disarming had been misconstrued. But, although close to Georgina Henry, his influence on the Guardian leader column is probably slight. His own beat, after all, is to write about the media.

Ronan Bennett is a much more disquiet- ing and potent character. He has denied ever having been a member of the IRA but his sympathies are plainly with the organi- sation, as a series of articles he has written over the years for the Guardian and the Observer makes clear. (A 1998 article in the London Review of Books gave probably the most intimate portrait of IRA thinking ever published.) He is a great admirer of Gerry Adams, and has interviewed him sympa- thetically at least twice for the two newspa- pers. When the 'Brighton Bomber' Patrick Magee was released last year, Mr Bennett was reportedly one of a small group of peo- ple present at a party to celebrate his free- dom. He is also a novelist — his most recent book was praised in the Guardian without mention of his relationship with the paper's deputy editor — and a writer of screenplays. The shamelessly pro-IRA film A Further Gesture (1998) was the work of his hand, and he is the writer of a film cur- rently being produced in Dublin about the 1916 Easter Uprising. This is considered so sectarian that RTE, the Irish television channel, has withdrawn its support, though BBC Northern Ireland is still funding it, and it will be shown on our screens.

Mr Bennett, as I say, has written for the Guardian and the Observer over the years, and without his history being mentioned. But he is not a member of staff, and is rarely to be seen in the offices the newspa- pers share. Much of his influence is dis- cernible in his partner, Georgina Henry, who has written leaders about Northern Ireland and is a pro-Republican presence during editorial conferences. One of her bugbears at the moment is the Observer which, despite having published two long pro-Sinn Fein pieces by Mr Bennett during the past year, is regarded as dangerously sympathetic to the Unionists, and is jocu- larly referred to as 'the Ulster'. Sinn Fein is also disappointed with the Observer's grow- ing moderation, as a Sinn Fein delegation visiting the newspaper's offices this Thurs- day will make clear.

One conundrum is the attitude of Alan Rusbridger, editor of the Guardian and executive editor of the Observer, to this Republican cell in his midst. There are many senior journalists at the Guardian who, while not being remotely pro-Unionist, bitterly dislike and distrust the IRA. With his background (public school, Garrick Club member, essentially apolitical) you might expect Mr Rusbridger to be one of them. And yet he tolerates an increasingly pro- IRA line. One senior Guardian journalist suggests to me that he 'probably likes the chic idea of hobnobbing with Provos', and points out that Danny Morrison, the former IRA man who coined the phrase 'the Armalite and the ballot box', was a guest at the Guardian's summer party last year.

There is, of course, no reason why the newspaper should not vigorously support the peace process and the involvement of Republicans in the government of North- ern Ireland. But the role of Ronan Bennett in its counsels is bound to be controversial, as it becomes known, and the Guardian is surely wrong to run his articles without telling readers who he is. It mocks the Tele- graph for its dyed-in-the-wool support of the Unionist cause, but at least that paper does not fish in the wilder reaches of Unionism. Alone in the British press, the Guardian is a bit too close for its own good to a terrorist organisation that has still not laid down a single weapon.