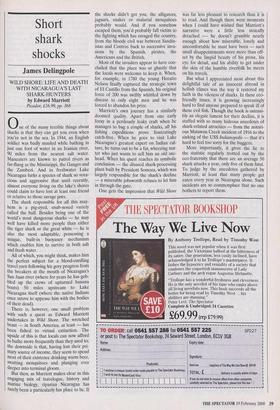 Picador, £16.99, pp. 368 One of the many terrible things about sharks is that they can get you even when you're not in the sea. In 1944, an English soldier was badly mauled while bathing in just one foot of water in an Iranian river, 90 miles from the nearest salt water. Maneaters are known to patrol rivers as far-flung as the Mississippi, the Ganges and the Zambezi. And in freshwater Lake Nicaragua lurks a species of shark so vora- cious and aggressive that until recently, almost everyone living on the lake's shores could claim to have lost at least one friend or relative to those savage jaws.

The shark responsible for all this may- hem is a pig-eyed, snub-nosed variety called the bull. Besides being one of the world's most dangerous sharks — he may well have killed more people than either the tiger shark or the great white — he is also the most adaptable, possessing a unique, built-in buoyancy mechanism which enables him to survive in both salt and fresh water.

All of which, you might think, makes him the perfect subject for a blood-curdling travel yarn following his gory progress from the breakers at the mouth of Nicaragua's San Juan river (where for years he has gob- bled up the crews of upturned banana boats) 50 miles upstream to Lake Nicaragua itself (where the native Indians once strove to appease him with the bodies of their dead).

There is, however, one small problem with such a quest as Edward Marriott undertakes in Wild Shore. The wretched beast — in South America, at least — has been fished to virtual extinction. The upside of this is that locals can now afford to bathe more frequently than they used to; the downside is that, having lost their pri- mary source of income, they seem to spend most of their existence drinking warm beer, swatting mosquitoes and plunging ever deeper into terminal gloom.

But then, as Marriott makes clear in this engaging mix of travelogue, history and marine biology, riparian Nicaragua has rarely been a particularly fun place to be. If the sharks didn't get you, the alligators, jaguars, snakes or malarial mosquitoes probably would. And if you somehow escaped them, you'd probably fall victim to the fighting which has ravaged the country, from the bloody civil war between Sandin- istas and Contras back to successive inva- sions by the Spanish, pirates, the Americans and the British.

Most of the invaders appear to have con- cluded that the place was so ghastly that the locals were welcome to keep it. When, for example, in 1780 the young Horatio Nelson finally captured the strategic town of El Castillo from the Spanish, his original force of 200 was swiftly whittled down by disease to only eight men and he was forced to abandon his prize.

Marriott's own journey has a similarly doomed quality. Apart from one early foray in a perilously leaky craft when he manages to bag a couple of sharks, all his fishing expeditions prove frustratingly catch-free. When he goes to visit Lake Nicaragua's greatest expert on Indian cul- ture, he turns out to be a fat, wheezing nut- ter who just wants to sell him an old axe- head. When his quest reaches its symbolic conclusion — the disused shark-processing plant built by President Somoza, which was largely responsible for the shark's decline — a miserable jobsworth refuses to let him in through the gate.

One gets the impression that Wild Shore was far less pleasant to research than it is to read. And though there were moments when I could have wished that Marriott's narrative were a little less stoically detached — he doesn't grumble nearly enough about how miserable, lonely and uncomfortable he must have been — such small disappointments were more than off- set by the limpid beauty of his prose, his eye for detail, and his ability to get under the skin of the humble riverfolk he meets on his travels.

But what I appreciated most about this delightful tale of an innocent abroad in hellish climes was the way it restored my faith in the vileness of sharks. In these eco- friendly times, it is growing increasingly hard to find anyone prepared to speak ill of these evil fish. Though the book is ostensi- bly an elegaic lament for their decline, it is stuffed with so many hideous anecdotes of shark-related atrocities — from the notori- ous Matawan Creek incident of 1916 to the sinking of the USS Indianopolis — that it's hard to feel too sorry for the buggers.

More importantly, it gives the lie to the statistic regularly trotted out by the eco-fraternity that there are an average 50 shark attacks a year, only five of them fatal. To judge by the anecdotes gathered by Marriott, at least that many people get eaten every year in Nicaragua alone. Such incidents are so commonplace that no one bothers to report them.