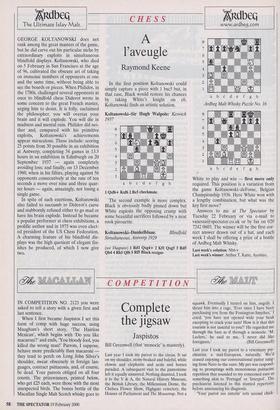 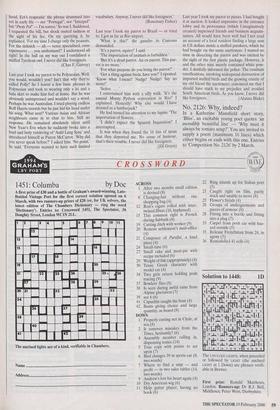 IN COMPETITION NO. 2123 you were asked to tell a story with a given first and last sentence.

When I first became Jaspistos I set this form of comp with huge success, using Maugham's short story, 'The Hairless Mexican', which begins with 'Do you like macaroni?' and ends, 'You bloody fool, you killed the wrong man!' Parrots, I suppose, behave more predictably than macaroni they tend to perch on Long John Silver's shoulder, swear obscenely in foreign lan- guages, contract psittacosis, and, of course, be dead. Your parrots obliged on all four counts. The prizewinners, printed below, who get £25 each, were those with the most unexpected birds. The bonus bottle of the Macallan Single Malt Scotch whisky goes to Bill Greenwell (that 'monocle' is masterly).

Last year I took my parrot to the circus. It sat on my shoulder, stony-beaked and baleful, while clowns and elephants and seals and horses paraded. A subsequent visit to the pantomime left it equally unmoved. Nothing daunted, I took it to the V & A, the Natural History Museum, the British Library, the Millennium Dome, the Chelsea Flower Show, Highgate cemetery, the Houses of Parliament and The Mousetrap. Not a squawk. Eventually I turned on him, angrily. I thrust him into a cage. `Ever since I have been purchasing you from the Fossington-Smythes,' cried, 'you have not opened wide your beak excepting to crack your nuts! How is it that this tourism is not tasteful to you?' He regarded me through the bars as if through a monocle. `M. Leclerc,' he said to me, 'I never did like foreigners.' (Bill Greenwell) Last year I took my parrot to a veterinary psy- chiatrist, a mid-European, naturally. We'd ceased enjoying our conversational patter rang- ing from Nero to the euro. My pet was respond- ing to promptings with monotonous psittacine repetition that sounded to my concerned ears as something akin to 'Portugal' or 'Interpol'. The psychiatrist listened to this stunted repertoire before announcing his diagnosis.

hood. Eet's reapeatin' the phrase drummed into eet in early life — not "Portugal", not "Interpol" but "Pretty Pol" — I'm sorree.' So was I. Saddened, I requested the bill, but shock ousted sadness at the sight of his fee. On my querying it, he explained, 'For my time I charge only the peanuts. For the ticknick — ah — veree specialised, veree expenseeve ... you understand?' I understood all right! In the hall on my way out I vandalised a stuffed Tyrolean owl. I never did like foreigners.

Last year I took my parrot to be Polynesian. Well, you would, wouldn't you? Isn't that why they're called Polly? So I learnt a few basic phrases in Polynesian and took to wearing only a lei and a hula skirt to make him feel at home. But he was obviously unimpressed and wouldn't say a word. Perhaps he was Australian. I tricd playing endless Rolf Harris records but he just hid his head under his wing. What next? Various Asian and African neighbours came in to chat to him. Still no response. He remained absolutely silent until New Year's Eve when he suddenly broke into a loud and lusty rendering of 'Auld Lang Syne' and Introduced himself as Parrot McCarrot. 'Why did you never speak before?' I asked him. 'No point,' he said. 'Everyone seemed to have such limited

(Rosemary Fisher) Last year I took my parrot to Brazil — or tried to. I got as far as Rio airport.

`What is this?' the gaucho in Customs demanded.

`The importation of animals is forbidden.'

`For what purpose do you bring the parrot?'

'Got a thing against birds, have you?' I riposted. `Know what I mean? Nudge! Nudge! Say no more!'

' I entertained him with a silly walk. 'It's the annual Monty Python convention in Rio!' I explained. Honestly! Why else would I have dressed as a lumberjack? He had turned his attention to my lupins. 'The importation of flowers. . . '

'I didn't expect the Spanish Inquisition!' I interrupted.

It was when they found the 16 tins of spam that they deported me. No sense of humour, that's their trouble. I never did like foreigners.

(Jill Green) Last year I took my parrot to pieces. I had bought it at auction. It looked impressive in the entrance lobby and its provenance (which I imaginatively created) impressed friends and business acquain- tances. All would have been well had I not read an account of a local resident finding a large sum in US dollars inside a stuffed parakeet, which he had bought via the same auctioneer. I wasted no time in dissecting the parrot and was excited by the sight of the first plastic package. However, it and the other nine merely contained white pow- der. I dutifully informed the police. The resultant ramifications, involving widespread destruction of imported stuffed birds and the growing enmity of my old friend the auctioneer, convinced me that I should have stuck to my prejudice and avoided South American birds. As you know, I never did like foreigners. (Alanna Blake)

In a Katherine Mansfield short story, `Bliss', an excitable young poet quotes 'an incredibly beautiful line' — 'Why must it always be tomato soup?' You are invited to supply a poem (maximum 16 lines) which either begins or ends with this one. Entries to 'Competition No. 2126' by 2 March.