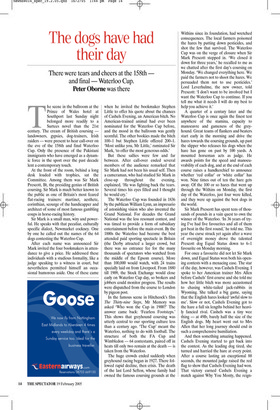 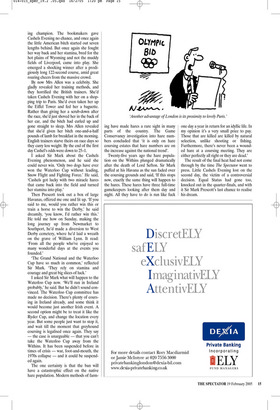 The dogs have had their day

There were tears and cheers at the 158th — and final — Waterloo Cup. Peter Oborne was there The scene in the ballroom at the Prince of Wales hotel at Southport last Sunday night belonged more readily to a Surtees novel than the 21st century. The cream of British coursing landowners, gypsies, dog-trainers, Irish raiders — were present to hear call-over on the eve of the 158th and final Waterloo Cup. Only the presence of the Pakistani immigrants who have emerged as a dynamic force in the sport over the past decade lent a contemporary touch.

At the front of the room, behind a long desk loaded with trophies, sat the Committee. Among them was Sir Mark Prescott, Bt, the presiding genius of British coursing. Sir Mark is much better known to the public as one of Britain’s most feared flat-racing trainers: martinet, aesthete, corinthian, scourge of the handicapper and architect of some of most famous gambling coups in horse-racing history.

Sir Mark is a small man, wiry and powerful. He speaks with that peculiar, culturally specific dialect, Newmarket cockney. One by one he called out the names of the 64 dogs contesting the Waterloo Cup.

After each name was announced Sir Mark invited the four bookmakers in attendance to give a price. He addressed these individuals with a studious formality, like a judge speaking to a witness in court, but nevertheless permitted himself an occasional humorous aside. One of these came when he invited the bookmaker Stephen Little to offer his quote about the chances of Cashels Evening, an American bitch. No American-trained animal had ever been nominated for the Waterloo Cup before, and the mood in the ballroom was gently scornful. The other bookies made the bitch 100–1 but Stephen Little offered 200–1. ‘Most unlike you, Mr Little,’ ruminated Sir Mark, ‘to offer the most generous odds.’ But these sallies were few and far between. After call-over ended several members of the audience remarked that Sir Mark had not been his usual self. Then a cameraman, who had studied Sir Mark in close-up throughout the evening, explained, ‘He was fighting back the tears. Several times his eyes filled and I thought he would cry.’ The Waterloo Cup was founded in 1836 by the publican William Lynn, an impresario of astonishing vision who also invented the Grand National. For decades the Grand National was the less resonant contest, and was timed to provide a form of subsidiary entertainment before the main event. By the 1880s the Waterloo had become the best attended paid sporting spectacle in Britain (the Derby attracted a larger crowd, but there was no entrance fee for the many thousands of spectators who watched from the middle of the Epsom course). More than 100,000 would watch, with 24 trains specially laid on from Liverpool. From 1880 till 1909, the Stock Exchange would close early on Waterloo Cup day, so brokers and jobbers could monitor progress. The results were dispatched from the course to London by pigeon post.

In the famous scene in Hitchcock’s film The Thirty-nine Steps, Mr Memory was asked ‘Who won the Cup in 1900?’ The answer came back: ‘Fearless Footsteps.’ This shows that greyhound coursing was utterly central to our sporting culture less than a century ago. ‘The Cup’ meant the Waterloo, nothing to do with football. The structure of both the FA Cup and Wimbledon — 64 contestants, paired off in heats till only two remain at the death — is taken from the Waterloo.

The huge crowds ended suddenly when greyhound racing began in 1927. There followed rapid decline, then crisis. The death of the last Lord Sefton, whose family had owned the famous coursing grounds at the Withins since its foundation, had wretched consequences. The local farmers poisoned the hares by putting down pesticides, and shot the few that survived. The Waterloo Cup was on the verge of closure when Sir Mark Prescott stepped in. ‘We closed it down for three years,’ he recalled to me as we chatted after the first day’s coursing on Monday. ‘We changed everything here. We paid the farmers not to shoot the hares. We persuaded them not to use pesticides.’ Lord Leverhulme, the new owner, told Prescott: ‘I don’t want to be involved but I want the Waterloo Cup to continue. If you tell me what it needs I will do my best to help you achieve it.’ A quarter of a century later and the Waterloo Cup is once again the finest test anywhere of the stamina, capacity to manoeuvre and gameness of the greyhound. Great teams of flankers and beaters start early in the morning and drive the hares towards the coursing grounds, up past the slipper who releases his dogs when the hare has gone on past by 100 yards. A mounted horseman acts as judge. He awards points for the speed and manoeuvrability of each dog, and at the end of each course raises a handkerchief to announce whether ‘red collar’ or ‘white collar’ has won. Nine times out of ten the hare gets away. Of the 100 or so hares that went up through the Withins on Monday, the first day of the Waterloo, just four were killed, and they were up against the best dogs in the world.

Sir Mark Prescott has spent tens of thousands of pounds in a vain quest to own the winner of the Waterloo. ‘In 36 years of trying I’ve had five favourites and all of them got beat in the first round,’ he told me. This year the curse struck yet again after a wave of overnight money drove the talented Prescott dog Equal Status down to 6–1 favourite on Monday morning.

For once a favourite did not let Sir Mark down, and Equal Status won both his opening contests with a menacing ease. The star of the day, however, was Cashels Evening. I spoke to her American trainer Mrs Allen before Cashels’ first course and she told me how her little bitch was more accustomed to chasing white-tailed jack-rabbits in Wyoming. She talked a big game, saying that the English hares looked ‘awful slow to me’. Slow or not, Cashels Evening got to the hare a full six lengths behind her heavily fancied rival. Cashels was a tiny wee thing — at 49lb, barely half the size of the English dogs. My heart went out to Mrs Allen that her long journey should end in such a comprehensive humiliation.

And then something amazing happened. Cashels Evening started to get back into the contest. As the leading dog tired, she turned and harried the hare at every point. After a course lasting an exceptional 88 seconds, the mounted judge raised the red flag to show that Cashels Evening had won. That victory earned Cashels Evening a match against Why You Monty, the reign ing champion. The bookmakers gave Cashels Evening no chance, and once again the little American bitch started out seven lengths behind. But once again she fought her way back and her stamina, bred for the hot plains of Wyoming and not the muddy fields of Liverpool, came into play. She emerged a shocking winner after a prodigiously long 122-second course, amid great roaring cheers from the massive crowd.

By now Mrs Allen was a celebrity. She gladly revealed her training methods, and they horrified the British trainers. She’d taken Cashels Evening with her on a shopping trip to Paris. She’d even taken her up the Eiffel Tower and fed her a baguette. Rather than giving her a scrub-down after the race, she’d just shoved her in the back of her car, and the bitch had curled up and gone straight to sleep. Mrs Allen revealed that she’d given her bitch one-and-a-half pounds of lamb for breakfast in the morning. English trainers starve theirs on race days so they carry less weight. By the end of the first day Cashel’s odds were down to 25–1.

I asked Sir Mark about the Cashels Evening phenomenon, and he said she could never win. ‘Only two dogs have ever won the Waterloo Cup without leading, Snow Flight and Fighting Force.’ He said, ‘Cashels got lucky with two miracle hares that came back into the field and turned her stamina into play.’ Then Prescott took out a box of large Havanas, offered me one and lit up. ‘If you said to me, would you rather win this or train a horse to win the Derby,’ he said dreamily, ‘you know, I’d rather win this.’ He told me how on Sunday, making the long journey up from Newmarket to Southport, he’d made a diversion to West Derby cemetery, where he’d laid a wreath on the grave of William Lynn. It read: ‘From all the people who’ve enjoyed so many wonderful days at the events you founded.’ ‘The Grand National and the Waterloo Cup have so much in common,’ reflected Sir Mark. ‘They rely on stamina and courage and great big slices of luck.’ I asked Sir Mark what will happen to the Waterloo Cup now. ‘We’ll run in Ireland probably,’ he said. But he didn’t sound convinced. The Waterloo Cup committee has made no decision. There’s plenty of coursing in Ireland already, and some think it would become just another Irish event. A second option might be to treat it like the Ryder Cup, and change the location every year. But some people just want to stop it, and wait till the moment that greyhound coursing is legalised once again. They say — the case is unarguable — that you can’t take the Waterloo Cup away from the Withins. It has been suspended before in times of crisis — war, foot-and-mouth, the 1970s collapse — and it could be suspended again.

The one certainty is that the ban will have a catastrophic effect on the native hare population. Modern methods of farm ing have made hares a rare sight in many parts of the country. The Game Conservancy investigation into hare numbers concluded that ‘it is only on hare coursing estates that hare numbers are on the increase against the national trend’.

Twenty-five years ago the hare population on the Withins plunged dramatically after the death of Lord Sefton. Sir Mark puffed at his Havana as the sun faded over the coursing grounds and said, ‘If this stops now, exactly the same thing will happen to the hares. These hares have three full-time gamekeepers looking after them day and night. All they have to do is run like fuck one day a year in return for an idyllic life. In my opinion it’s a very small price to pay. Those that are killed are killed by natural selection, unlike shooting or fishing. Furthermore, there’s never been a wounded hare at a coursing meeting. They are either perfectly all right or they are dead.’ The result of the final heat had not come through by the time The Spectator went to press. Little Cashels Evening lost on the second day, the victim of a controversial decision. Equal Status had gone too, knocked out in the quarter-finals, and with it Sir Mark Prescott’s last chance to realise his dream.