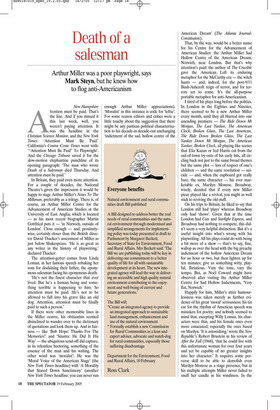 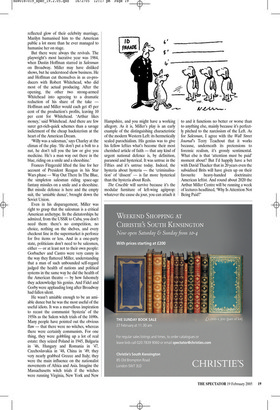 Death of a salesman

Arthur Miller was a poor playwright, says Mark Steyn, but he knew how to flog anti-Americanism

Attention must be paid. That’s the line. And if you missed it this last week, well, you weren’t paying attention. It was the headline in the Christian Science Monitor, and the New York Times: ‘Attention Must Be Paid.’ California’s Contra Costa Times went with: ‘“Attention Must Be Paid” To Playwright’. And the Chicago Tribune saved it for the slow-motion elephantine punchline of its opening paragraph: ‘The man who wrote Death of a Salesman died Thursday. And attention must be paid.’ In Britain, they paid even more attention. For a couple of decades, the National Theatre’s given the impression it would be happy to stage Arthur Miller’s Notes To The Milkman, preferably as a trilogy. There is, of course, an Arthur Miller Centre for the Advancement of American Studies at the University of East Anglia, which is located — as his most recent biographer Martin Gottfried puts it — ‘in Norwich, outside of London’. Close enough — and, proximitywise, certainly closer than the British director David Thacker’s assessment of Miller as just below Shakespeare. ‘He is as great as any writer in the history of playwriting,’ declared Thacker.

The attention-getter comes from Linda Loman, in her famous speech rebuking her sons for disdaining their father, the eponymous salesman facing his eponymous death: ‘He’s not the finest character that ever lived. But he’s a human being and something terrible is happening to him. So attention must be paid. He’s not to be allowed to fall into his grave like an old dog. Attention, attention must be finally paid to such a person.’ If there were other memorable lines in the Miller oeuvre, his obituarists seemed disinclined to wander over to the dictionary of quotations and look them up. And in fairness — like ‘Bob Hope: Thanks For The Memories!’ and ‘Sinatra: He Did It His Way’ — the ubiquitous send-off did capture, in its relentless hectoring, something of the essence of the man and his writing. The other word was ‘moralist’: He was the ‘Moral Voice of the American Stage’ (the New York Times headline) with ‘A Morality that Stared Down Sanctimony’ (another New York Times headline: you can never run enough Arthur Miller appreciations). ‘Moralist’ in this instance is code for ‘leftie’. For some reason editors and critics were a little touchy about the suggestion that there might be any partisan political characterisation to his decade-in decade-out unchanging ‘indictment of the sad, hollow centre of the American Dream’ (The Atlanta JournalConstitution).

That, by the way, would be a better name for his Centre for the Advancement of American Studies: the Arthur Miller Sad Hollow Centre of the American Dream, Norwich, near London. But that’s why attention’s paid: the author of The Crucible gave the American Left its enduring metaphor for the McCarthy era — the witch hunts — and, indeed, for the post-9/11 Bush-Ashcroft reign of terror, and for terrors yet to come. It’s the all-purpose portable metaphor for anti-Americanism.

I tired of his plays long before the politics. In London in the Eighties and Nineties, there seemed to be a new Arthur Miller every month, until they all blurred into one unending premiere — The Ride Down Mt Morgan, The Last Yankee, The American Clock, Broken Glass, The Last American, The Ride Down Broken Glass, The Last Yankee Down Mt Morgan, The American Yankee, Broken Clock, all playing like scenes that Elia Kazan or Jed Harris cut from the out-of-town try-outs of his early hits, all circling back not just to the same broad themes but the same plot — loss of respect of one’s children — and the same resolution — suicide — and, when the cupboard got really bare, the same character — his ever marketable ex, Marilyn Monroe. Broadway, wisely, decided that if every new Miller piece played like a revival, you might as well stick to reviving the old stuff.

On his trips to Britain, he liked to say that London still had ‘plays’ whereas Broadway only had ‘shows’. Given that at the time London had Cats and Starlight Express, and Broadway had nothing to compete, this didn’t seem a very helpful distinction. But it’s a useful insight into what’s wrong with his playwriting. All his plays could do with being a bit more of a show — that’s to say, fine, wallop us over the head with the big preachy indictment of the hollow American Dream for an hour or two, but then lighten up for ten minutes; give us something witty, playful, flirtatious. Vary the tone, vary the tempo. But, as Noël Coward might have observed after visiting the Arthur Miller Centre for Sad Hollow Indictments, ‘Very flat, Norwich.’ Happily for him, Miller’s utter humourlessness was taken merely as further evidence of his great ‘moral’ seriousness; his tin ear for the rhythm of American speech was mistaken for poetry; and nobody seemed to mind that, excepting Willy Loman, his characters were thin, and his female ones even more emaciated, especially the ones based on Marilyn. ‘It is astonishing,’ wrote the New Republic’s Robert Brustein in his review of After the Fall (1968), ‘that he could live with this unfortunate woman for over four years and yet be capable of no greater insights into her character.’ It requires some perverse skill to be able to demolish even Marilyn Monroe as a stage presence, but in his multiple attempts Miller never failed to snuff her candle in his windiness. In the reflected glow of their celebrity marriage, Marilyn humanised him to the American public a lot more than he ever managed to humanise her on stage.

But there were always the revivals. The playwright’s most lucrative year was 1984, when Dustin Hoffman starred in Salesman on Broadway. Miller may have disliked shows, but he understood show business. He and Hoffman cut themselves in as co-producers with Robert Whitehead, who did most of the actual producing. After the opening, the other two strong-armed Whitehead into agreeing to a dramatic reduction of his share of the take Hoffman and Miller would each get 45 per cent of the production’s profits, leaving 10 per cent for Whitehead. ‘Arthur likes money,’ said Whitehead. And there are few surer get-rich-quick schemes than a savage indictment of the cheap hucksterism at the heart of the American Dream.

‘Willy was a salesman,’ says Charley at the climax of the play. ‘He don’t put a bolt to a nut, he don’t tell you the law or give you medicine. He’s a man way out there in the blue, riding on a smile and a shoeshine.’ Frances Fitzgerald lifted the line for her account of President Reagan in his Star Wars phase — Way Out There In The Blue, the simpleton salesman riding space-age fantasy missiles on a smile and a shoeshine. But missile defence is here and the empty suit, the ‘amiable dunce’, brought down the Soviet Union.

Even in his disparagement, Miller was right to grasp that the salesman is a critical American archetype. In the dictatorships he admired, from the USSR to Cuba, you don’t need them: there’s no competition, no choice, nothing on the shelves, and every checkout line in the supermarket is perforce for five items or less. And in a one-party state, politicians don’t need to be salesmen, either — or at least not to their own people: Gorbachev and Castro were very canny in the way they flattered Miller, understanding that a man of such unbounded self-regard judged the health of nations and political systems in the same way he did the health of the American theatre — by how fulsomely they acknowledge his genius. And Fidel and Gorby were applauding long after Broadway had fallen silent.

He wasn’t amiable enough to be an amiable dunce but he was the most useful of the useful idiots. It was a marvellous inspiration to recast the communist ‘hysteria’ of the 1950s as the Salem witch trials of the 1690s. Many people have pointed out the obvious flaw — that there were no witches, whereas there were certainly communists. For one thing, they were gobbling up a lot of real estate: they seized Poland in 1945, Bulgaria in ’46, Hungary and Romania in ’47, Czechoslavakia in ’48, China in ’49; they very nearly grabbed Greece and Italy; they were the main influence on the nationalist movements of Africa and Asia. Imagine the Massachusetts witch trials if the witches were running Virginia, New York and New Hampshire, and you might have a working allegory. As it is, Miller’s play is an early example of the distinguishing characteristic of the modern Western Left: its hermetically sealed parochialism. His genius was to give his fellow lefties what’s become their most cherished article of faith — that any kind of urgent national defence is, by definition, paranoid and hysterical. It was untrue in the Fifties and it’s untrue today. Indeed, the hysteria about hysteria — the ‘criminalisation’ of ‘dissent’ — is far more hysterical than the hysteria about Reds.

The Crucible will survive because it’s the modular furniture of left-wing agitprop: whatever the cause du jour, you can attach it to and it functions no better or worse than to anything else, mainly because it’s perfectly pitched to the narcissism of the Left. As for Salesman, I agree with the Wall Street Journal’s Terry Teachout that it works because, underneath its pretensions to forensic realism, it’s grossly sentimental. What else is that ‘attention must be paid’ moment about? But I’d happily have a bet with David Thacker that in 20 years even the subsidised Brits will have given up on their favourite heavy-handed doctrinaire American leftist. And round about 2020 the Arthur Miller Centre will be running a week of lectures headlined, ‘Why Is Attention Not Being Paid?’