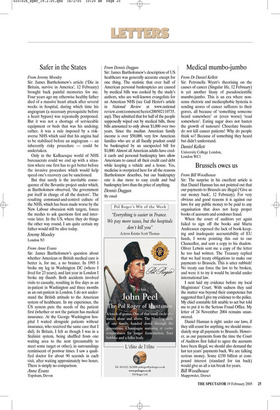 Safer in the States

Sir: James Bartholomew’s article (‘Die in Britain, survive in America’, 12 February) brought back painful memories for me. Four years ago my otherwise healthy father died of a massive heart attack after several weeks in hospital, during which time his angiogram (a necessary prerequisite before a heart bypass) was repeatedly postponed. But it was not a shortage of serviceable equipment or beds that was his undoing; rather, it was a rule imposed by a riskaverse NHS which said that his angina had to be stabilised before an angiogram — an inherently risky procedure — could be undertaken.

Only in the Kafkaesque world of NHS bureaucrats could we end up with a situation where one first has to get better before the invasive procedure which would help speed one’s recovery can be sanctioned.

But that surely is the inevitable consequence of the Bevanite project under which, as Bartholomew observed, ‘the government put itself in charge of all the doctors’. The resulting command-and-control culture of the NHS, which has been made worse by the New Labour obsession with targets, forces the medics to ask questions first and intervene later. In the US, where they do things the other way round, I am quite certain my father would still be alive today.

Sir: James Bartholomew’s question about whether American or British medical care is better is, for me, a no brainer. In 1995 I broke my leg in Washington DC (where I lived for 23 years), and last year in London I broke my thumb. Both accidents involved visits to casualty, resulting in five days as an in-patient in Washington and three months as an out-patient in London. I do not understand the British attitude to the American system of healthcare. In my experience, the US system puts the needs of the patient first (whether or not the patient has medical insurance. At the George Washington hospital I waited alongside patients without insurance, who received the same care that I did). In Britain, I felt as though I was in a Stalinist system, being shuffled from one waiting area to the next (presumably to meet some target or other), in surroundings reminiscent of postwar times. I saw a qualified doctor for about 90 seconds in each visit, after waiting approximately two hours. There is simply no comparison.

Sir: James Bartholomew’s description of US healthcare was generally accurate except for one thing. The statistic that over half of American personal bankruptcies are caused by medical bills was cooked by the study’s authors, who are well-known evangelists for an American NHS (see Gail Heriot’s article in National Review at www.national review.com/comment/heriot200502110735. asp). They admitted that for half of the people supposedly wiped out by medical bills, those bills amounted to only about $1,000 over two years. Since the median American family income is over $50,000, very few American families who are at all fiscally prudent could be bankrupted by an unexpected bill for $1,000. Almost all American adults have credit cards and personal bankruptcy laws allow Americans to cancel all their credit card debt while keeping a vehicle and a house. Yes, medicine is overpriced here for all the reasons Bartholomew describes, but our bankruptcy rate is due more to easy credit and bad bankruptcy laws than the price of anything.