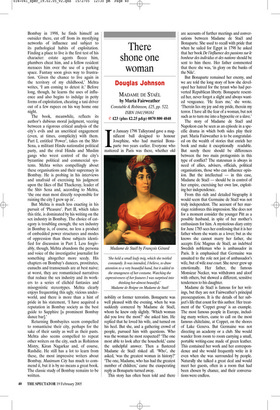 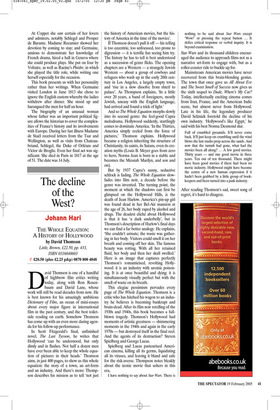 There shone one woman

MADAME DE STAËL by Maria Fairweather Constable & Robinson, £25, pp. 522, ISBN 1841198161 ✆ £23 (plus £2.25 p&p) 0870 800 4848 In January 1798 Talleyrand gave a magnificent ball designed to honour Josephine, who had married Bonaparte two years earlier. Everyone who mattered in Paris was there, whether old nobility or former terrorists. Bonaparte was well pleased with the evening, when he was suddenly cornered by Madame de Staël, whom he knew only slightly. ‘Which woman did you love the most?’ she asked him. He replied that he loved his wife, and turned on his heel. But she, and a gathering crowd of people, pursued him with questions. Who was the woman he most respected? ‘The one most able to look after the household,’ came the unhelpful answer. Then a flustered Madame de Staël risked all. ‘Who’, she asked, ‘was the greatest woman in history?’ ‘The one, Madame, who has had the greatest number of children,’ came the exasperating reply as Bonaparte turned away.

This story has often been told and there are accounts of further meetings and conversations between Madame de Staël and Bonaparte. She used to recall with pride that when he sailed for Egypt in 1798 he asked that her book De l’influence des passions sur le bonheur des individus et des nations should be sent to him there. Her father commented that there she was, ‘in glory on the banks of the Nile’.

But Bonaparte remained her enemy, and we are told the long story of how she developed her hatred for the tyrant who had perverted Republican liberty. Bonaparte resented her, never forgot a slight and always wanted vengeance. ‘He fears me,’ she wrote. ‘Therein lies my joy and my pride, therein my terror. I have all the fear of a woman, but not such as to turn me into a hypocrite or a slave.’ The story of Madame de Staël and Napoleon can be seen as an episode in a specific drama in which both sides play their part. Maria Fairweather is to be congratulated on the wealth of stories that enrich her book and make it exceptionally readable. But surely there should be differences between the two main protagonists in this type of conflict? The statesman is always in need of allies, advisers, officials, political organisations, those who can influence opinion. But the intellectual — in this case, Madame de Staël — should be in control of her empire, exercising her own law, exploiting her independence.

From this rich and detailed biography it would seem that Germaine de Staël was not truly independent. The account of her marriage reinforces this impression. She does not for a moment consider the younger Pitt as a possible husband, in spite of her mother’s enthusiasm for him. A mysterious diary entry for June 1785 sees her confessing that it is her father whom she wants as a lover; but as she knows she cannot marry her father, she accepts Eric Magnus de Staël, an indebted Swedish nobleman who is ambassador in Paris. It is emphasised that Germaine was unsuited to the role not just of ambassador’s wife, but of wife tout court. She never grew up emotionally. Her father, the famous Monsieur Necker, was withdrawn and aloof with others, but showed a different, sensitive tenderness to his daughter.

Madame de Staël is famous for her writings, but they are not Fairweather’s principal preoccupations. It is the details of her subject’s life that count for this author. Her treatment of the ‘Coppet group’ is an example. The most famous people in Europe, including many writers, came to call on the most famous châtelaine, at Coppet, on the shores of Lake Geneva. But Germaine was not directing an academy or a club. She would wander from room to room carrying a small, portable writing-case made of green leather. This contained her work and her correspondence and she would frequently write in it even when she was surrounded by people. Naturally she talked a great deal and would meet her guests, often in a room that had been chosen by chance, and their conversations were endless. At Coppet she saw certain of her lovers and admirers, notably Schlegel and Prosper de Barante. Madame Recamier showed her devotion by coming to stay; and Germaine, anxious to demonstrate her knowledge of French drama, hired a hall in Geneva where she could produce plays. She put on four by Voltaire, as well as Racine’s Phèdre, in which she played the title role, while writing one herself especially for the occasion.

This book presents us with her personality rather than her writings. When Germaine visited London in June 1813 she chose to ignore the English custom whereby the ladies withdrew after dinner. She stood up and harangued the men for half an hour.

The biography of an unusual woman whose father was an important political figure allows the historian to cover the complexities of France’s history and its involvements with Europe. During her last illness Madame de Staël received letters from the Tsar and Wellington, as well as visits from Chateaubriand, Schlegel, the Duke of Orléans and Victor de Broglie. Even her final act was significant. She died in Paris in 1817 at the age of 51. The date was 14 July.