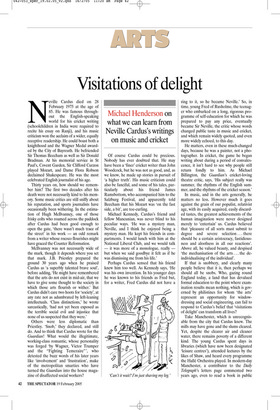 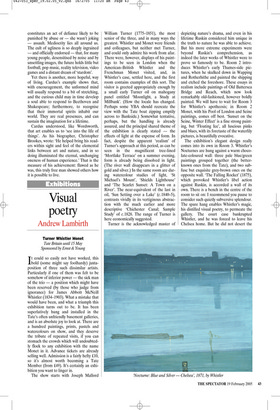 Neville Cardus died on 28 February 1975 at the age of 85. He was famous throughout the English-speaking world for his cricket writing (schoolchildren in India were required to recite his essay on Ranji), and his music criticism won the acclaim of a wider, equally receptive readership. He could boast both a knighthood and the Wagner Medal awarded by the City of Bayreuth. He befriended Sir Thomas Beecham as well as Sir Donald Bradman. At his memorial service in St Paul’s, Covent Garden, Sir Clifford Curzon played Mozart, and Dame Flora Robson declaimed Shakespeare. He was the most celebrated English journalist of his age.

Thirty years on, how should we remember him? The first two decades after his death were not necessarily kind to his memory. Some music critics are still sniffy about his reputation, and sports journalists have occasionally been withering. In the estimation of Hugh McIlvanney, one of those frisky colts who roamed across the paddock after Cardus had been good enough to open the gate, ‘there wasn’t much trace of the street’ in his work — an odd remark from a writer whose rococo flourishes might have graced the Counter Reformation.

McIlvanney was not necessarily wide of the mark, though it depends where you set that mark. J.B. Priestley prepared the ground 30 years ago when he praised Cardus as ‘a superbly talented brave soul’, before adding, ‘He might have remembered that the arts do not exist in mid-air, that we have to give some thought to the society in which those arts flourish or wither.’ But Cardus didn’t care two hoots for ‘society’, at any rate not as adumbrated by left-leaning intellectuals. ‘Class distinctions,’ he wrote sarcastically, ‘had not yet been exposed as the terrible social evil and injustice that none of us suspected that they were.’ Others were less diplomatic than Priestley. ‘Snob,’ they declared, and still do. And to think that Cardus wrote for the Guardian! What would the illegitimate, working-class romantic, whose personality was forged ‘by Wagner, Victor Trumper and the “Fighting Temeraire”’, who detested the buzz words of his later years like ‘involvement’ and ‘frustration’, make of the metropolitan smarties who have turned the Guardian into the house magazine of disaffected social workers? Of course Cardus could be precious. Nobody has ever doubted that. He may have been a ‘finer’ cricket writer than John Woodcock, but he was not as good, and, as we know, he made up stories in pursuit of ‘a higher truth’. His music criticism could also be fanciful, and some of his tales, particularly about his friend James Ramsbottom, who accompanied him to the Salzburg Festival, and apparently told Beecham that his Mozart was ‘on the fast side, a bit’, are toe-curling.

Michael Kennedy, Cardus’s friend and fellow Mancunian, was never blind to his peculiar ways. ‘He was a mystery man, Neville, and I think he enjoyed being a mystery man. He kept his friends in compartments. I would lunch with him at the National Liberal Club, and we would talk — it was more of a monologue, really but when we said goodbye it felt as if he was dismissing me from his life.’ Perhaps Cardus sensed that his friend knew him too well. As Kennedy says, ‘He was his own invention. In his younger days he was known to his friends as Fred but, for a writer, Fred Cardus did not have a ring to it, so he became Neville.’ So, in time, young Fred of Rusholme, the teenager who embarked on a long, rigorous programme of self-education for which he was prepared to pay any price, eventually became Sir Neville, the critic whose words changed public taste in music and cricket, and which remain widely quoted, and even more widely echoed, to this day.

He matters, even in these much-changed days, because he was a painter, not a photographer. In cricket, the game he began writing about during a period of convalescence, it isn’t hard to see why people still return fondly to him. As Michael Billington, the Guardian’s cricket-loving theatre critic, says, ‘His subject really was summer, the rhythms of the English summer, and the rhythms of the cricket season.’ In music, and in the arts generally, he matters no less. However much it goes against the grain of our populist, relativist age, with its easily acquired, easily discarded tastes, the greatest achievements of the human imagination were never designed merely to ‘entertain’ us. Cardus believed that ‘pleasure of all sorts must submit to degree and severe selection... there should be a certain aristocracy, fastidiousness and aloofness in all our reactions’. Above all, he valued beauty, and despised ‘the mechanisation of the arts ... the deindividualising of the individual’.

If that is snobbery, and clearly many people believe that it is, then perhaps we should all be snobs. Who, gazing round England today, a land that has devalued formal education to the point where examination results mean nothing, which is governed by philistines for whom ‘the arts’ represent an opportunity for windowdressing and social engineering, can fail to respond to Cardus’s belief that ‘visitations of delight’ can transform all lives?

Take Manchester, which is unrecognisable from the city that Cardus knew. The mills may have gone and the slums cleared. Yet, despite the clearer air and cleaner water, there remains poverty of a different kind. The young Cardus spent days in libraries (which have now been designated ‘leisure centres’), attended lectures by the likes of Shaw, and heard every programme the Hallé Orchestra played. In modern-day Manchester, a contributor to the Daily Telegraph’s letters page commented two years ago, even to read a book in public constitutes an act of defiance likely to be punished by abuse or — she wasn’t joking — assault. Mediocrity lies all around us. The cult of ugliness is so deeply ingrained — and officially endorsed — that, for many young people, desensitised by noise and by unsettling images, the future holds little but football, pop music, reality television, video games and a distant dream of ‘stardom’.

Yet there is another, more hopeful, way of living. Cardus’s example shows that, with encouragement, the unformed mind will usually respond to a bit of stretching, and the curious child may in time develop a soul able to respond to Beethoven and Shakespeare; furthermore, to recognise that their immortal spirits inhabit our world. They are real presences, and can sustain the imagination for a lifetime.

Cardus understood, like Wordsworth, that art enables us to ‘see into the life of things’. As his biographer, Christopher Brookes, wrote: ‘He helped bring his readers within sight and feel of the elemental links between art and nature, and in so doing illuminated the eternal, unchanging oneness of human experience.’ That is the measure of his achievement: flawed as he was, this truly free man showed others how it is possible to live.