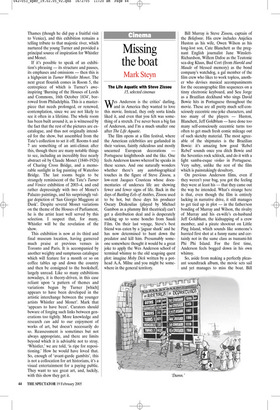 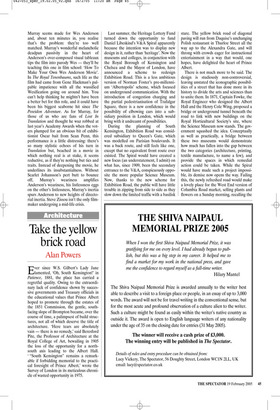 The Life Aquatic with Steve Zissou 15, selected cinemas Wes Anderson is the critics’ darling, and in America they wanted to love this movie. Instead, they only sorta kinda liked it, and even that you felt was something of a stretch. I’ve never been a big fan of Anderson, and I’m a much smaller one after The Life Aquatic.

The film opens at a film festival, where the American celebrities are garlanded in their various, faintly ridiculous and mostly unearned European decorations Portuguese knighthoods and the like. One feels Anderson knows whereof he speaks in these scenes. And one naturally wonders whether there’s any autobiographical touches in the figure of Steve Zissou, a low-rent Jacques Cousteau whose documentaries of undersea life are showing fewer and fewer signs of life. Back in the days of Battling Eels of Antibes, Zissou used to be hot, but these days his producer Oseary Drakoulias (played by Michael Gambon as a plummy Brit theatrical) can’t get a distribution deal and is desperately sucking up to some honcho from Saudi Film. On their last voyage, Steve’s best friend was eaten by a ‘jaguar shark’ and he has now determined to hunt down the predator and kill him. Presumably someone somewhere thought it would be a great joke to apply the Wes Anderson school of terminal whimsy to the old seagoing quest plot: imagine Moby Dick written by a pothead A.A. Milne and you might be somewhere in the general territory. Bill Murray is Steve Zissou, captain of the Belafonte. His crew includes Anjelica Huston as his wife, Owen Wilson as his long-lost son, Cate Blanchett as the pregnant English journalist Jane WinslettRichardson, Willem Dafoe as the Teutonic sea-dog Klaus, Bud Cort (from Harold and Maude of blessed memory) as the bond company’s watchdog, a gal member of the film crew who likes to work topless, another who devises musical accompaniments for the oceanographic film sequences on a tinny electronic keyboard, and Seu Jorge as a Brazilian deckhand who sings David Bowie hits in Portuguese throughout the movie. These are all pretty much self-consciously eccentric one-joke characters, and too many of the players — Huston, Blanchett, Jeff Goldblum — have done too many self-consciously eccentric turns too often to get much fresh comic mileage out of such sketchy material. The most agreeable of the shipmates is the Brazilian Bowie: it’s amazing how good ‘Rebel Rebel’ sounds once you ditch Bowie and the Seventies rock schlock, and do it with a light samba-esque violao in Portuguese. Very sultry, unlike the rest of the film which is painstakingly desultory.

On previous Anderson films, even if they weren’t your bag, you got the feeling they were at least his — that they came out the way he intended. What’s strange here is that, even though the film is entirely lacking in narrative drive, it still manages to get tied up in plot — in the father/son bonding of Murray and Wilson, the rivalry of Murray and his ex-wife’s ex-husband Jeff Goldblum, the kidnapping of a crew member, and a pirate shootout on Little Ping Island, which sounds like someone’s hurried first shot at a funny name and certainly not in the same class as tsunami-hit Phi Phi Island. For the first time, Anderson feels bogged down in his own whimsy.

So, aside from making a perfectly pleasant soundtrack album, the movie sets sail and yet manages to miss the boat. Bill Murray seems made for Wes Anderson and, about ten minutes in, you realise that’s the problem: they’re too well matched. Murray’s wonderful melancholic deadpan passivity in the heart of Anderson’s over-composed visual tableaux tips the film into parody Wes — they’ll be teaching this one in film school: ‘How To Make Your Own Wes Anderson Movie’. In The Royal Tenenbaums, such life as the film had came from Gene Hackman’s palpable impatience with all the wussified Wesification going on around him. You can’t help thinking he mightn’t have been a better bet for this role, and it could have been his biggest seaborne hit since The Poseidon Adventure. As for Murray, for those of us who are fans of Lost In Translation and thought he wuz robbed at last year’s Academy Awards when the voters plumped for an obvious bit of exhibitionist Oscar bait from Sean Penn, this performance is a little distressing: there’s so many stylistic echoes of his turn in Translation but, beached in a movie in which nothing real is at stake, it seems reductive, as if they’re nothing but tics and traits. Instead of deepening the movie, he underlines its insubstantialness. Without Scarlet Johansson’s pert butt to bounce off, Murray’s weariness amplifies Anderson’s weariness, his listlessness eggs on the other’s listlessness, Murray’s inertia spurs Anderson to new heights of directorial inertia. Steve Zissou isn’t the only filmmaker undergoing a mid-life crisis.