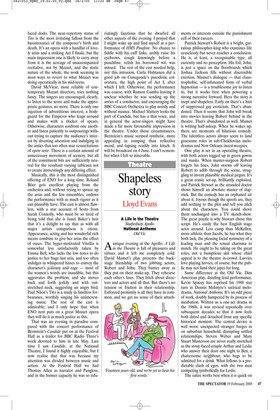 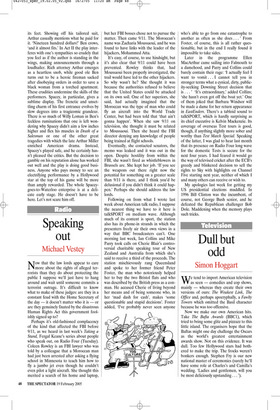 A Life in the Theatre Shaftesbury Apollo National Anthems Old Vic Aunique evening at the Apollo. A Life in the Theatre is full of pleasures and virtues and it left me completely cold. David Mamet’s play presents the backstage friendship of two jobbing actors, Robert and John. They banter away as they put on their make-up. They rehearse each other’s lines. They bitch about directors and actors and all that. But there’s no tension or friction in their relationship. Enforced proximity is all they have in common, and we get no sense of their attach ments or interests outside the punishment cell of their careers.

Patrick Stewart’s Robert is a bright, garrulous philosopher-king who examines life ceaselessly but never reaches a conclusion. He is, at least, a recognisable type, all curiosity and no perception. His foil, John, is just a space on the floorboards which Joshua Jackson fills without discernible exertion. Mamet’s dialogue — that claustrophobic, self-infatuated form of verbal hypnotism — is a troublesome joy to listen to, but it works best when powering a strong narrative forward. Here the story is inept and shapeless. Early on there’s a hint of suppressed gay eroticism. That’s abandoned. Then it seems that John will break into movies leaving Robert behind in the theatre. That’s abandoned as well. Mamet is writing half-asleep. When he wakes up, there are moments of hilarious comedy. The talentless actors always seem to land gruesome roles in sub-Chekhovian melodramas and New Orleans incest weepies.

One play is set in an operating theatre, with both actors togged up in green gowns and masks. When master-surgeon Robert forgets his lines, John storms off leaving Robert to adlib through the scene, struggling to invent plausible medical jargon. It’s a great comic set-up, brilliantly exploited, and Patrick Stewart as the stranded doctor shows himself an absolute master of slapstick. But the comedy has an orphaned air about it. Joyous though the spoofs are, they add nothing to the plot and tell you zilch about the characters. You could shove them unchanged into a TV sketch-show. The great puzzle is why Stewart chose this script. He’s easily the best English stage actor around. Less camp than McKellen, more athletic than Jacobi, he has what they both lack, the pleasing facial symmetry of a leading man and the sexual charisma to match. He ought to be taking on the great roles, not a bumptious skit whose chief appeal is to the theatre in-crowd. Luvvies love playing luvvies, of course, but the public may not fund their japes for long.

Same difference at the Old Vic. Dim American play, dazzling lead performance. Kevin Spacey has reprised his 1988 star turn in Dennis McIntyre’s satirical melodrama, National Anthems. It’s an odd piece of work, doubly hampered by its process of incubation. Written as a one-act drama in the 1960s, it was revised repeatedly over subsequent decades so that it now feels both dated and detached from any specific historical moment. The central device is well worn: unexpected stranger barges in on suburban household, disrupting settled relationships. Steven Weber and Mary Stuart Masterson are never really stretched as the stony-faced couple Arthur and Leslie who answer their door one night to Ben, a chattersome neighbour, who begs to be admitted for a drink. What follows is a predictable clash of egos, with the two men competing symbolically for Leslie.

The satire works best when it is quick on its feet. Showing off his tailored suit, Arthur casually mentions what he paid for it. ‘Nineteen hundred dollars!’ Ben crows, ‘and it almost fits.’ In Act II the play interferes with one’s sympathies so crudely that you feel as if the author is standing in the wings, making announcements through a loudhailer. Rich attorney Arthur emerges as a heartless snob, while good ole Ben turns out to be a heroic fireman sacked after disobeying orders in order to save a black woman from a torched apartment. These crudities undermine the skills of the performers. Spacey, in particular, gives a sublime display. The frenetic and unsettling charm of his first entrance evolves by slow degrees into a tragicomic grandeur. There is so much of Willy Loman in Ben’s feckless ruminations that one is left wondering why Spacey didn’t aim a few inches higher and flex his muscles in Death of a Salesman or one of the other great tragedies with which the late Arthur Miller enriched American drama. Instead, Spacey’s played safe, and he certainly hasn’t pleased the critics. But the decision to gamble on his reputation alone has worked out well and the play is doing good business. Anyone who pays money to see an electrifying performance by a Hollywood star at the top of his game will be more than amply rewarded. The whole Spaceygoes-to-Waterloo enterprise is at a delicate early stage. He doesn’t have to be here. Let’s not scare him off.