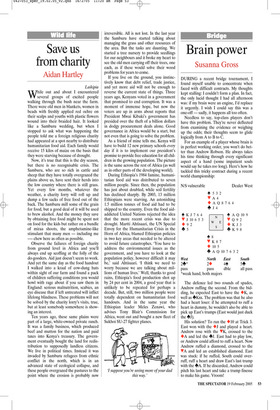 Save us from charity

While out and about I encountered several groups of excited people walking through the bush near the farm. There were old men in blankets, women in beads with freshly applied red ochre on their scalps and youths with plastic flowers wound into their braided hair. It looked like a Samburu wedding, but when I stopped to ask what was happening the people told me a foreign religious charity had appeared at a spot nearby to distribute humanitarian food aid. Each family would receive 15 kilos of maize on the basis that they were starving because of drought.

Now, it’s true that this is the dry season, but there is no recognisable crisis. The Samburu, who are so rich in cattle and sheep that they have totally overgrazed the plains above us, have sent their herds into the low country where there is still grass. Yet every few months, whatever the weather, a charity lorry will roll up and dump a few sacks of free food out of the back. The Samburu mill some of the grain for food, but a good deal of it will be used to brew alcohol. And the money they save by obtaining free food might be spent not on food for the kids but rather on a bundle of miraa shoots, the amphetamine-like stimulant that many men — including me —chew here as often as possible.

Observe the failures of foreign charity from ground level in Africa and you’ll always end up scoffing at the folly of the do-gooders. Aid just doesn’t seem to work. And yet the same day as the food handout I walked into a kraal of cow-dung huts within sight of our farm and found a pack of children suffering conditions you would howl with rage about if you saw them in England: serious malnutrition, scabies, an eye disease that if left untreated will inflict lifelong blindness. These problems will not be solved by the charity lorry’s visits, true, but at least somebody somewhere is showing an interest.

Ten years ago, these same plains were part of a large, white-owned private ranch. It was a family business, which produced beef and mutton for the nation and paid taxes into Kenya’s treasury. The government eventually bought the land for redistribution to supposedly landless citizens. We live in political times. Instead it was invaded by Samburu refugees from ethnic conflict in the north, which is in an advanced state of ecological collapse, and these people overgrazed the pastures to the point where the erosion is probably now irreversible. All is not lost. In the last year the Samburu have started talking about managing the grass and other resources of the area. But the tasks are daunting. We started a tree nursery to provide seedlings for our neighbours and it broke my heart to see the old men carrying off their trees, one each, as if these would solve their wood problems for years to come.

If you live on the ground, you instinctively know that debt relief, trade justice, and yet more aid will not be enough to reverse the current state of things. Three years ago, Kenyans voted in a government that promised to end corruption. It was a moment of immense hope, but now the voters are up in arms about reports that President Mwai Kibaki’s government has presided over the theft of a billion dollars in dodgy procurement deals alone. Good governance in Africa would be a start, but not even that is going to solve the problem.

As a friend of mine tells me, Kenya will have to build 12 new primary schools every day if it is to implement our president’s promise to provide free education for all children in the growing population. The picture is the same across the rest of Africa (as well as in other parts of the developing world).

During Ethiopia’s 1984 famine, humanitarian food aid was distributed to seven million people. Since then, the population has just about doubled, while soil fertility has declined sharply. By 2003, 13 million Ethiopians were starving. An astonishing 1.5 million tonnes of food aid had to be shipped to the country. Even the food aidaddicted United Nations rejected the idea that the more recent crisis was due to drought. Martti Ahtisaari, the UN Special Envoy for the Humanitarian Crisis in the Horn of Africa, blamed Ethiopian policies in two key areas that needed to be altered to avoid future catastrophes. ‘You have to address the environmental issues as the government, and you have to look at the population policy, however difficult it may be,’ said Ahtisaari. ‘I think we need to worry because we are talking about millions of human lives.’ Well, thanks to good rains, Ethiopia’s food production shot up by 24 per cent in 2004, a good year that is unlikely to be repeated for perhaps a decade. But, still, two million people were totally dependent on humanitarian food handouts. And in the same year the Ethiopian leader Meles Zenawi, who advises Tony Blair’s Commission for Africa, went out and bought a new fleet of Sukhoi SU-27 fighter planes.