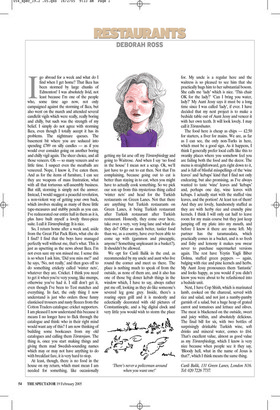 Igo abroad for a week and what do I find when I get home? That Ikea has been stormed by large chunks of Edmonton! I was absolutely livid, not least because I’m one of the people who, some time ago now, not only campaigned against the storming of Ikea, but also went on the march and attended several candlelit vigils which were really, really boring and chilly, but such was the strength of my belief. I simply do not agree with storming Ikea, even though I totally accept it has its problems. The nightmare queues. The basement bit where you are seduced into spending £789 on silly candles — as if you would ever consider going on another boring and chilly vigil again. The sheer choice, and all those veneers. Oh — so many veneers and so little time. I suspect even the meatballs are veneered. Nope, I know it, I’ve eaten them. And as for the items of furniture, I can see they are weapons of mass frustration, what with all that torturous self-assembly business. But still, storming is simply not the answer. Instead, I would suggest a peaceful revolution, a non-violent way of getting your own back, which involves stealing as many of those little tape-measures and stubby pencils as you can. I’ve redecorated our entire hall in them as it is, plus have built myself a lovely three-piece suite. I call it Törstenfriedegg. It is nice.

So, I return home after a week and, aside from the Great Flat Pack Riots, what else do I find? I find that the boys have managed perfectly well without me, that’s what. This is just as upsetting as the news about Ikea. I’m not even sure my son missed me. I sense this is so when I ask him, ‘Did you miss me?’ and he says, ‘No, not really,’ and then goes off to do something crickety called ‘winter nets’, whatever they are. Cricket. I think you need to get it when you’re very young, like mumps, otherwise you’ve had it. I still don’t get it, even though I’ve been to Test matches and everything. In fact, the only thing I now understand is just who orders those funny elasticised trousers and nasty fleeces from the Cotton Traders catalogue: cricket supporters. I am pleased I now understand this because it means I no longer have to flick through the catalogue and think: who in their right mind would want any of this? I am now thinking of building some bookcases from my old catalogues and calling them Törstenjam. The thing is, once you start making things and giving them mad Swedish-sounding names which may or may not have anything to do with breakfast fare, it is very hard to stop.

At least, though, there is no food in the house on my return, which must mean I am needed for something, like occasionally getting my fat arse off my Törstenfriedegg and going to Waitrose. And when I say ‘no food in the house’ I mean not a scrap. Ok, we’ll just have to go out to eat then. Not that I’m complaining, because going out to eat is better than staying in to eat, when you might have to actually cook something. So we pick our son up from this mysterious thing called ‘winter nets’ and head for the Turkish restaurants on Green Lanes. Not that there are anything but Turkish restaurants on Green Lanes, it being Turkish restaurant after Turkish restaurant after Turkish restaurant. Honestly, they come over here, take over a very, very long lane and what do they do? Offer us much better, tastier food than we, as a country, have ever been able to come up with (gammon and pineapple, anyone? Something unpleasant in a basket?). It shouldn’t be allowed.

We opt for Canli Balik in the end, as recommended by my uncle and aunt who live round the corner and meet us there. The place is nothing much to speak of from the outside, as none of them are, and it also has one of those big doner kebab things in the window which, I have to say, always rather put me off, looking as they do like someone’s severed leg gone grey. Inside, there’s a roaring open grill and it is modestly and eclectically decorated with old pictures of Constantinople, and a big digital clock and very little you would wish to storm the place for. My uncle is a regular here and the waitress is so pleased to see him that she practically hugs him to her substantial bosom. She calls me ‘lady’ which is nice. ‘This chair OK for the lady?’ ‘Can I bring you water, lady?’ My Aunt Jessy says it must be a long time since I was called ‘lady’, if ever. I have decided that my next project is to make a bedside table out of Aunt Jessy and veneer it with her own teeth. It will look lovely. I may call it Törstenbutter.

The food here is cheap as chips — £2.50 for starters, a fiver for mains. We are, as far as I can see, the only non-Turks in here, which must be a good sign. As it happens, I think I generally prefer local caffs like this to swanky places where you somehow feel you are failing both the food and the decor. The menu is straightforward, gets right down to it, and is full of blissful misspellings of the ‘wine leaves’ and ‘kebaps’ kind that I find not only endearing, but also promising, as I’ve always wanted to taste ‘wine’ leaves and ‘kebaps’ and, perhaps one day, wine leaves with kebaps. I actually start with the stuffed vine leaves, and the portion! At least ten of them! And they are lovely, handsomely stuffed as they are with herby rice and crunchy pine kernels. I think I will only eat half to leave room for my main course but they just keep jumping off my plate into my mouth, and before I know it there are none left. My partner has the taramasalata, which practically comes in a bucket, and is so fresh and fishy and lemony it makes you swear never to purchase supermarket versions again. The rest have Yeytin Yagli Biber Dolma, stuffed green peppers — again, bulging with rice and pine kernels and herbs. My Aunt Jessy pronounces them ‘fantastic’ and looks happy, as you would if you didn’t know you were about to be refashioned into a bedside unit.

Next, I have Cop Shish, which is marinated lamb, cooked on the charcoal, served with rice and salad, and not just a namby-pamby garnish of a salad, but a huge heap of grated carrot and tomatoes and lettuce and olives. The meat is blackened on the outside, sweet and juicy within, and absolutely delicious. The final bill for six, with two bottles of surprisingly drinkable Turkish wine, soft drinks and mineral water, comes to £64. That’s excellent value, almost as good value as my Törstenfriedegg, which I know is very nice because when people see it they say, ‘Bloody hell, what in the name of Jesus is that?’, which I think means the same thing.