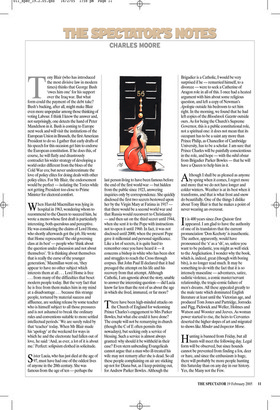 T ony Blair (who has introduced the most divisive law in

modern times) thinks that George Bush ‘owes him one’ for his support over the Iraq war. But what form could the payment of the debt take? Bush’s backing, after all, might make Blair even more unpopular among those thinking of voting Labour. I think I know the answer and, not surprisingly, one detects the hand of Peter Mandelson in it. Bush is coming to Europe next week and will visit the institutions of the European Union in Brussels, the first American President to do so. I gather that early drafts of his speech for this occasion get him to endorse the European constitution. If he does this, of course, he will flatly and disastrously contradict his wider strategy of developing a world order different from the blocs of the Cold War era; but never underestimate the love of policy elites for doing deals with other policy elites. For Mr Blair, the endorsement would be perfect — isolating the Tories while not getting President too close to Prime Minister for electoral comfort.

When Harold Macmillan was lying in hospital in 1963, wondering whom to recommend to the Queen to succeed him, he wrote a memo whose first draft is particularly interesting, both querulous and perceptive. He was considering the claims of Lord Home, who shortly afterwards got the job. He wrote that Home represented ‘the old governing class at its best’ — people who ‘think about the question under discussion and not about themselves’. ‘It is thinking about themselves that is really the curse of the younger generation,’ Macmillan went on, ‘they appear to have no other subject which interests them at all ... Lord Home is free ... from many of the difficulties that beset modern people today. But the very fact that he is free from them makes him in my mind at a disadvantage ... because this strange people, tortured by material success and affluence, are seeking release by some teacher who is himself subject to all those pressures and is not ashamed to break the ordinary rules and conventions suitable to more settled intellectual periods.’ We are surely ruled by that ‘teacher’ today. When Mr Blair made his ‘apology’ at the weekend for ways in which he and the electorate had fallen out of love, he said: ‘And, as ever, a lot of it is about me.’ Perfect: solipsism clothed in solicitude.

Sister Lucia, who has just died at the age of 97, must have had one of the oddest lives of anyone in the 20th century. She was famous from the age of ten — perhaps the last person living to have been famous before the end of the first world war — but hidden from the public since 1923, answering inquiries only by correspondence. She quickly disclosed the first two secrets bestowed upon her by the Virgin Mary at Fatima in 1917 that there would be a second world war and that Russia would reconvert to Christianity — and then sat on the third secret until 1944, when she sent it to the Pope with instructions not to open it until 1960. In fact, it was not disclosed until 2000, when the present Pope gave it millennial and personal significance. Like a lot of secrets, it is quite hard to remember once you have heard it — it concerns a bishop in white who has been shot and struggles to reach the Cross through corpses. But John Paul II declared that it had presaged the attempt on his life and his recovery from that attempt. Although Catholic, I am agnostic about the story, unable to answer the interesting question — did Lucia know far less than the rest of us about the age in which she lived, immured, or far more?

There have been high-minded attacks on the Church of England for welcoming Prince Charles’s engagement to Mrs Parker Bowles, but what else could it have done? The couple will not be remarrying in church (though the C of E often permits this nowadays), but seeking only a service of blessing. Such a service is almost always granted: why should it be withheld in their case? Even stern unbending Evangelicals cannot argue that a man who ill-treated his wife may not remarry after she is dead. So all these people complaining on air are sticking up not for Diana but, as I keep pointing out, for Andrew Parker Bowles. Although the Brigadier is a Catholic, I would be very surprised if he — remarried himself, to a divorcee — were to seek a Catherine of Aragon role in all of this. I once had a heated argument with him about some religious question, and left a copy of Newman’s Apologia outside his bedroom to set him right. In the morning, we found that he had left copies of the Bloodstock Gazette outside ours. As for being the Church’s Supreme Governor, this is a public constitutional role, not a spiritual one: it does not mean that its occupant has to be a saint any more than Prince Philip, as Chancellor of Cambridge University, has to be a scholar. I am sure that Prince Charles will be painfully conscientious in the role, and hope — with the nihil obstat from Brigadier Parker Bowles — that he will have a Queen to help him in it.

Although I shall be as pleased as anyone by spring when it comes, I regret more and more that we do not have longer and colder winters. Weather is at its best when it transforms, and that is what frost and snow do beautifully. One of the things I dislike about Tony Blair is that he makes a point of never wearing an overcoat.

It is 400 years since Don Quixote first appeared. I am glad to have the authority of one of its translators that the current pronunciation ‘Don Keehoty’ is inauthentic. The author, apparently, would have pronounced the ‘x’ as a ‘sh’, so, unless you want to be pedantic, you might as well stick to the Anglicisation. I wonder why the book, which is, indeed, great (though with boring bits), is no longer read much. It may be something to do with the fact that it is so intensely masculine — adventures, satire, sadistic violence, a comic master/servant relationship, the tragic-comic failure of men’s dreams. All these appealed greatly to the male taste which dominated English literature at least until the Victorian age, and produced Tom Jones and Partridge, Jorrocks and Pigg, Pickwick and Weller, Holmes and Watson and Wooster and Jeeves. As woman power started to rise, the heirs to Cervantes deserted the higher slopes of art and migrated to shows like Minder and Inspector Morse.

Hunting is banned from Friday, but all hunts will meet the following day. Legal form will be observed, but since hounds cannot be prevented from finding a fox, deer or hare, and since the enthusiasm is huge, there will probably be more people hunting this Saturday than on any day in our history. Yes, the Many not the Few.