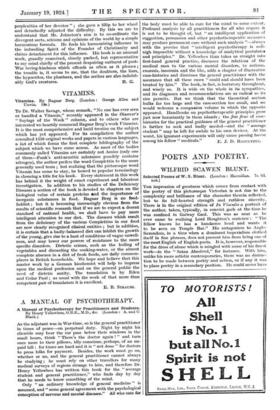 To Dr. Walter Savage, whose remark, "No one has ever seen or handled a Vitamin," recently appeared in the Observer's " Sayings of the Week " column, and to others who are interested we heartily commend Ragnar Berg's work Vitamins. It is the most comprehensive and lucid treatise on the subject which has yet appeared. For its compilation the author consulted 1556 original works and papers in various languages, a list of which forms the first complete bibliography of the subject which we have come across. As most of the bodies commonly called Vitamins are certainly not Amine (only one of them—Funk's anti-neuritic substance possibly contains nitrogen), the author prefers the word Complettin to the more generally used term ; but realizing that the picturesque word Vitamin has come to stay, he bowed to popular terminology in choosing a title for his book. Every statement in this work has behind it the weight of exact experiment and laborious investigation. In addition to his studies of the Deficiency Diseases a section of the book is devoted to chapters on the biological value of certain proteins and the importance of inorganic substances in food. Ragnar Berg is no food- faddist ; but it is becoming increasingly obvious from the results of scientific research that if we are to expect a decent standard of national health, we shall have to pay more intelligent attention to our diet. The diseases which result from the deficiency of the various Complettins in our food are .now clearly recognized clinical entities ; but in addition, it is certain that a badly-balanced diet can inhibit the growth of the young, give rise to a host of conditions of vague unwell- ness, and may lower our powers of resistance to the more specific disorders. Dietetic crimes, such as the boiling of vegetables and discarding the cooking-water, or the almost complete absence in a diet of fresh foods, are daily common- places in British households. We hope and believe that this master work by a German biochemist will help to impress upon the medical profession and on the general public the need of dietetic sanity. The translation is by Eden and Cedar Paul ; as usual with the work of that more than competent pair of translators it is excellent.