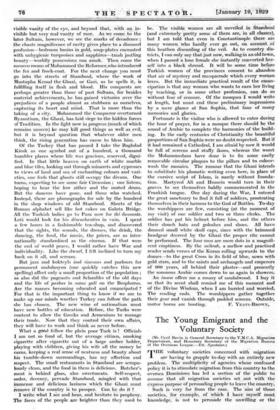 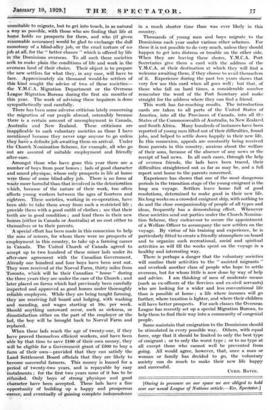 The Young Emigrant and the Voluntary Society (Mr. Cyril Bavin

is General Secretary to the Y.M.C.A. Migration Department, and Honorary Secretary. of the Migration Bureau of the Overseas League.—ED. Spectator.) THE yoluntary societies concerned with migration are having to grapple to-day with an entirely _new problem. The multiplicity of agencies whose confessed policy it is to stimulate migration from this country to the oversea Dominions has led a section of the public to assume that all migration societies set out with the express purpose of persuading people to leave the country.

Such is very far from the case. The aim of those societies, for example, of which I have myself most knowledge, is not to persuade the unwilling or the unsuitable to migrate, but to get into touch, in as natural a way as possible, with those who are finding that life at home holds no prospects for them, and who (if given reasonable assurance) would be glad to exchange the dull monotony of a blind-alley job, or the cruel torture of no job at all, for the " better chance " which is offered bylife in :the Dominions overseas. To all such these societies seek to make plain the conditions of life and work in the overseas land of their choice. Their object is to prepare the new settlers for what they, in any case, will have to face. Approximately six thousand ,would-be settlers of this 'kind sought the advice of two of these societiea= the Y.M.C.A. Migration Department or the Overseas League Migration Bureau during the first six months of this year. The work of advising these inquirers is done sympathetically - and carefully.

There has been some adverse criticism lately concerning the migration of our people abroad, ostensibly because there is a certain amount of unemployment in Canada, Australia and New Zealand. These criticisms are inapplicable to such voluntary societies as those I have mentioned because they never urge anyone to go unless they have a definite job awaiting them on arrival. Under the Church Nomination Scheme, for example, all who go out are assured of suitable employment and friendly after-care.

- Amongst those who have gone thiS year there are a number of boys from pool' homes ; lads of good character and sound physique, whose only prospects in life at home were tho* of some blind-alley job. There is no form of waste more harmful than that involved in the deterioration v.hich, because of the nature of then' work, too often affects young workers between the ages of fourteen and eighteen. These societies, working in co-operation, haVe been able to take them away from such a restricted life ; provide them with a gbod outfit of clothes ; see that their teeth are in good condition ; and land them in their new honies (either in Canada or Australia) at no cost either to theinielves-Or to their parents. "

A special effort has been made in this connexion to help the sons Of miners, for whom there were no prospects of employment in this country, to take up a farming career in Canada. The United Church of Canada agreed to accept up to two hundred of these Miner lads under its 'after-care agreement with the Canadian Government. Alieady one hundred and four boys have been sent out. They were received-at the Norval Farm, thirty miles from Toronto, whiCh will be their Canadian " home " during the-three year they are wider the care of the Church ; and later placed on farms which had previously been carefully inspected and approVed as good homes under thoroughly reliable emploYerS. - While they are being taught farming, they are receiving full 'hoard' and lodging, with Washing and mending, and wages starting at 10s. per week. Should 'anything untoward occur, such as sickness, or dissatisfaction either on the part of the employer or the lad, the boy will be brOtight back to Norval Farm and replaced. When these lads reach the age of twenty-one, if they have proved themselves efficient workers, and hive been • able by that time to save 1100 of their own money; they will be eligible for a Government grant of £500 to buy a farm of 'their -own—provided that they -call satisfy the Land Settlethent Board officials that they are likely to become successful farmers. This money is loaned for a period of twenty-two years,--and is repayable by easy instalmenta ; for the first two years none of it has to be refunded. Only boys of strong physique and good character have been accepted. These lads have a fine opportunity of building up a happy and prosperous scarcer; and eventually of gaMing complete independence in a much shorter time than was ever likely in this country. _ Thousands of young men and boys migrate_ to the Dominions each year undei various other schemes. For these it is not possible to do very much, unless they should happen to get into distress or trouble on the other side. When they are leaving these shores, Y.M.C.A. Port Secretaries give them a card with the address of the Y.M.C.A. at their destination at which they will find a welcome awaiting them, if they choose to avail themselves of it. Experience during the past ten years shows that very few use this card when all goes well ; but that, of those who fall on hard times, a considerable number remember the word of the Port Secretary and make straight for the address where they can find a friend.

This work has far-reaching results. The introduction cards are taken to all parts of the United States of America, into all the Provinces of Canada, into all the States of the Commonwealth of Australia, to New Zealand and South Africa. Many hundreds of instances have been reported of young men lifted out of their difficulties, found jobs, and helped to settle down happily in their new life. - In this connexion; appeals are constantly being received • from parents in this country, anxious about the welfare of their sons, because of the absence of any news or the receipt 'of bad news. In all such cases, through the help of oversea friends, the lads have been traced, their difficulties straightened out as far as may be, and a full report sent home to the parents concerned.

Experience has shown that one of the most dangerous periods in the transition stage of the young emigrant is the long sea voyage. Settlers leave home full of good resolutions, deterinined to make good in their new life. Six long weeks on a crowded emigrant ship, with nothing to do and the close Companionship 'of people of all types and ideas, frequently has a demoializing effect. Whenever these societies send out parties under the Church Nomina- tion Scheme, they endeavour to secure the appointment of a Welfare Officer to accompany the new settlers on the voyage. By virtue of his training and experience, he is particularly fitted to create a friendly atmosphere on board and to organize such recreational, social and spiritual activities as will fill the weeks spent on the voyage in a healthy and interesting way.

There is perhaps a danger that the voluntary societies will confine their activities to the " assisted migrants " and overlook another class of people who hope to settle overseas, but for whom little is now done by way of help and advice. I am thinking of men of moderate means (such as ex-officers of the Services and ex-civil servants) who 'are looking for a wider and less conventional life than is possible at home ; a life where incomes will go further, where taxation is lighter, and where their children will have better prospects. For such classes the Overseas League has recently set up a special Migration Bureau, to help them to find their way into a community of congenial people.

Some maintain that emigration to the Dominions should be stimulated in every possible way. Others, with equal force, urge that it should be limited to only the best type of emigrant ; or to only the worst type ; or to no type at all except those who cannot well be prevented from going. All would agree, however, that, once a man or woman or family has decided to go, the voluntary society can, do much to make their new life happy and successful.