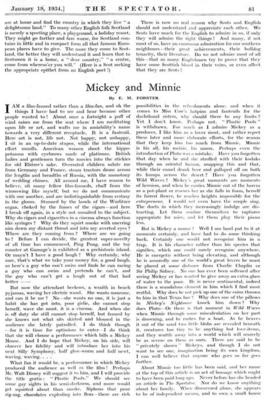 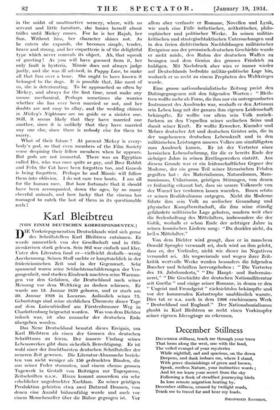 IAM a film-fanned rather than a film-fan, and oh the things I have. had to see and hear because other people wanted to ! About once a fortnight a puff of wind raises me from the seat where I am meditating upon life or art, and wafts me in amiability's name towards a very different receptacle., It is a fauteuil. Here art is not, life not. Not happy, not unhappy, I sit in an up-to-date stupor, while the international effort unrolls. American women shoot the hippo- potamus with eyebrows made of platinum. British ladies and gentlemen turn the movies into the stickies for old Elstree's sake. Overrated children salute me from Germany and France, steam tractors drone across the lengths and breadths of Russia, with the monotony of wedding chimes. All around me, I have reason to believe, sit many fellow film-fanneds, chaff from the winnowing like myself, but we do not communicate with one another, and are indistinguishable from ecstasy in the. gloom. Stunned by the howls of the Wurlitzer organ, choked by the fumes of the cigars—and here I break off again, in a style not unsuited to the subject. Why do cigars and cigarettes in a cinema always function like syringes ? Why do they squirt smoke with unerring aim down my distant throat and into.my averted eyes ? Where are they coming from ? Where are we going to ? Before I can decide, the greatest super-novelty of all time has commenced, Ping Pong, and the toy counter at Gamage's is exhibited as a prehistoric island. Or mayn't I have a good laugh ? Why certainly, why sure, that's what. we take your money for, a good laugh, so here's a- guy who can't swim and finds he can racing a guy who can swim and pretends he can't, and the guy who can't get a laugh out of that had better But now. the attendant beckons, a wraith in beach pyjamas, waving her electric wand. She wants someone, and can it be me ? No—.-she wants no one, it is just a habit ,she has got . into, poor girlie, she cannot stop herself, wave she must, it is a cinema. And when she is off duty she still cannot stop herself, but fanned by she knows not what sits skirted and bloused in the audience she lately patrolled. I do think though —for it is time for optimism to enter—I do think that she will choose a performance which bills a Mickey Mouse. And I do hope that Mickey, on his side, will observe her fidelity and will introduce her into his next Silly Symphony, half glow-worm and half newt, waving, waving. . . .

What fun it would be, a performance in which Mickey produced the audience as well as the film ! Perhaps Mr. Walt Disney will suggest it to him, and I will provide the title gratis : " Plastic Pools." We should see some gay sights in his semi-darkness, and more would get squirted about than smoke. Siphons that pour zig-zag, chocolates exploding into fleas—there are rich possibilities in the refreshments alone, and when it conies to Miss Cow's hatpins and fauteuils for the dachshund sisters, why should there be any limits ? Yet I don't know. Perhaps not. " Plastic Pools " is withdrawn. For much as I admire Mickey as a producer, I like him as a lover Most, and rather regret these later and more elaborate efforts, for the reason that they keep him too much from Minnie. Minnie is his all, his meinie, his moon. Perhaps even the introduction of Pluto was a mistake. Have you forgotten that day when lie and she strolled with their kodaks through an oriental bazaar, snapping this and that, while their camel drank beer and galloped off on both its humps across the desert ? Have you forgotten Wild Waves? Mickey's great moments are moments of heroism, and when he carries Minnie out of the harem as a pot-plant or rescues her as she falls in foam, herself its fairest flower, he reaches heights impossible for the entrepreneur. I would not even have the couple sing. The duets in which they increasingly indulge are dis- tracting. Let them confine themselves to raptures appropriate for mice, and let them play their piano less. • But is Mickey a mouse ? Well I am hard put to it. at moments certainly, and have had to do some thinking back. Certainly one would not recognize him in a trap. It is his character rather than his species that signifies, which one could surely recognize anywhere. He is energetic without being elevating, and although he is assuredly one of the world's great lovers he must be placed at some distance from Charlie Chaplin or Sir Philip Sidney. No one has ever been softened after seeing Mickey or has wanted to give away an extra glass of water to the poor. He is never sentimental, indeed there is a scandalous element in him which I find most restful. Why does he not pick up one of the coins thrown to him in that Texas bar ? Why does one of the pillows in Mickey's Nightmare knock him down ? Why does Pluto—Or there is that moment in Wild Waves when Minnie through some miscalculation on her part is drowning, and he rushes for a boat. As he heaves it out of the sand two little blobs are revealed beneath it, creatures too tiny to he anything but love-items, and they scuttle away into a world which will scarcely be as severe on them as ours. There arc said to be " privately shown " Mickeys, and though I do not want to see one, imagination being its own kingdom, I can well believe that anyone who goes so far goes further.

About Minnie too little has been said, and her name at the top of this article is an act of homage which ought to have been paid long ago. Never before has she headed an article in The Spectator. Nor do we know anything about her family. When discovered alone, she appears to be of independent means, and to own a small house in the midst of unattractive scenery, where, with no servant and little furniture, she busies herself about trifles until Mickey comes. For he is her Rajah, her Sun. Without him, her character shines not. As he enters she expands, she becomes simple, tender, brave and strong, and her coquetterie is of the delightful type -Which never conceals its object. Ah, that squeak of greeting ! As you will have guessed from it, her only fault is hysteria. Minnie does not always judge justly, and she was ill advised, in Puppy Love,.to.make all that fuss over a bone. She ought to have known it belonged to the dogs. It is possible that, like most of us, she is deteriorating. To be approached so often by Mickey, and always for the first time, must make any mouse mechanical. Perhaps sometimes she .worries whether she has ever been married or not, and her doubts are not easy to allay, and the wedding chimeS in Mickey's Nightmare are no guide or a sinister one. Still, it seems likely that they have married one another, since it is unlikely that they have married any one else, since there is nobody eLse for them to marry.

What of their future ? At present Mickey is every- body's god, so that even members of the Film Society cease despising their fellow members when he appears. But gods are not immortal. There was an Egyptian called Bes, who was once quite as gay, and Brer Rabbit and Felix the Cat have been forgotten too, and Ganesh is being forgotten. Perhaps he and Minnie will follow them into oblivion. I do not care two hoots. I am all for the human race. But how fortunate that it should have been accompanied, down the ages, by so many cheerful animals, and how lucky that the cinema has managed to catch the last of them in its questionable reels I