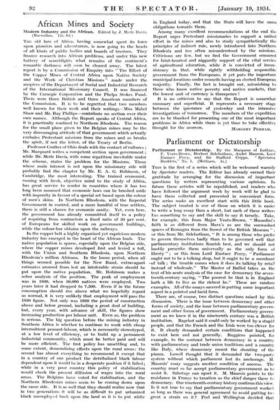 Modern Industry and the African. Edited by J. Merle Davis. (Macmillan. 12s. 6d.) Modern Industry and the African. Edited by J. Merle Davis. (Macmillan. 12s. 6d.) THE old lure of Africa, having somewhat spent its force upon pioneers and adventurers, is now going to the heads of all kinds of public bodies and boards of trustees. They finance research into African problems, and under this new battery of searchlights what remains of the continent's romantic darkness will soon be cleared away. The latest report is by a Commission of Enquiry into " The Effect of the Copper Mines of Central Africa upon Native Society and the Work of Christian Missions" made under the auspices of the Department of Social and Industrial Research of the International Missionary Council. It was financed by the Carnegie Corporation and the Phelps Stokes Fund. There were three British and three American members of the Commission. It is to be regretted that two members well known for their work and their writings—Miss Mabel Shaw and Mr. Ray Phillipscontribute no section over their own names. Although the Report speaks of Central Africa, it is practically confined to Northern Rhodesia. The reason .for the small place given to the Belgian mines may be the very discouraging attitude of that government which actually excludes Protestant missions from the mines and so breaks the spirit, if not the letter, of the Treaty of Berlin.

. Professor Coulter of Ohio deals with the contact of cultures ; Mr. Marquard writes a competent section upon government ; .while Mr. Merle Davis, with some repetition inevitable under the scheme, states the problem for the Missions. Those whose main interest is not upon the missionary side will probably find the chapter by Mr. E. A. G. Robinson, of Cambridge, the most interesting. The trained economist, coming with fresh, objective mind to the study of Africa, has great service to render in countries where it has too long been assumed that economic laws can be brushed aside with impunity in favour of a special set based upon the colour of men's skins. In Northern Rhodesia, with the Imperial Government in control, and a mere handful of true settlers, there is still a chance for economic sanity. Yet, even here, the government has already committed itself to a policy of requiring from contractors a fixed ratio of 50 per cent. of Europeans for skilled work on government buildings, while the colour-bar obtains upon the railways.

In the copper belt a highly organized yet capricious modern industry has emerged in the heart of the African bush. The native population is sparse, especially upon the Belgian side, where the copper mines developed first and levied a toll, with the Union and Southern Rhodesia, upon Northern Rhodesia's million Africans. In the boom period, when all things seemed possible for the New Rand, extravagant estimates aroused fears lest an intolerable strain should be put upon the native population. Mr. Robinson makes a sober analysis of the position. The peak of employment was in 1980, when 30,000 natives were employed. Two years later it had dropped to 7,500. Even if in the future consumption should rise above what we hopefully regard as normal, it is very unlikely that employment will pass the 1930 figure. Not only was 1980 the period of construction above and below ground, including a great deal of building, but, every year, with advance of skill, the figures show increasing production per labour unit. Even so, the problem is serious. The big question before the mining industry in Southern Africa is whether to continue to work with cheap intermittent peasant-labour, which is necessarily stereotyped, at a low level of efficiency, or to build up a permanent industrial community, which must be better paid and will be more efficient. The first policy has unsettling and, to some extent, demoralizing effects upon the rural areas : the second has almost everything to recommend it except that in a country of one product the detribalized black labour dependent upon it would be in a desperate position if it failed; while in a very poor country this policy of stabilization would check the present diffusion of wages into the rural areas. The Belgians have voted for stabilization, and the Northern Rhodesian mines seem to be coming down upon the same side. It is as well that they should realize now that in two generations it will be as difficult to put urbanized black unemployed back upon the land as it is to put white

in England today, and that the State will have the same obligations towards them.

Among many excellent recommendations at the end the Report urges Protestant missionaries to support a united effort in the mines and also to study sympathetically the principles of indirect rule, newly introduced into Northern Rhodesia and too often misunderstood by the missions. Criticisms are few, but we find the Government censured for faint-hearted and niggardly support of the vital service of agricultural education, while it is convicted of incon- sistency in that, while rightly withholding responsible government from the Europeans, it yet puts the important municipal locations under councils having an elected European majority. Finally, the fact is brought out, astonishing to those who know native poverty and native markets, that the lowest unit of currency is threepence !

It is no criticism to say that the Report is somewhat summary and superficial. It represents a necessary stage between the ignorance of yesterday and the intensive investigations of tomorrow. The members of the expedition are to be thanked for presenting one of the most important problems in Africa while there is yet time to take effective