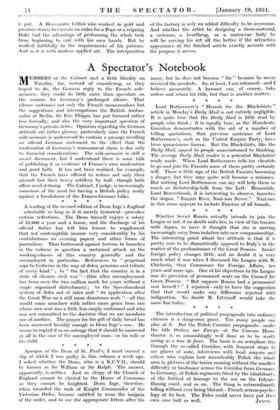 Lord Rothermere's " Hurrah for the Blackshirts " article in

Monday's Daily Mail is not entirely negligible. It is quite true that the Daily Mail is little read by people who think ; it is equally true, as the Manchester Guardian demonstrates with the aid of a number of telling quotations, that previous nostrums of Lord Rothermere's, such as the United Empire Party, have been ignominious fiascos. But the Blackshirts, like the Daily Mail, appeal to people unaccustomed to thinking. The average Daily. Mail reader is a potential Blackshirt ready made. When Lord Rothermere tells his clientele to go and join the Fascists some of them pretty certainly will. There is little sign of the British Fascists becoming a danger, but they may quite well become a nuisance. But nothing Lord Rothermere can say will help them so much as dictatorship-talk from the Left. Meanwhile, Lord Beaverbrook, it is interesting to observe, launches the slogan, " Empire Ever, Nazi-ism Never." Nazi-ism in this sense appears to include Fascism of all brands.