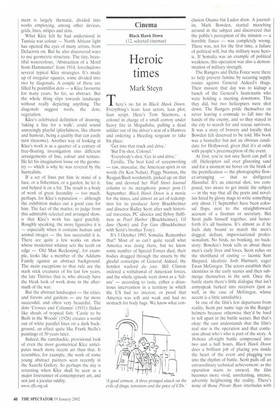 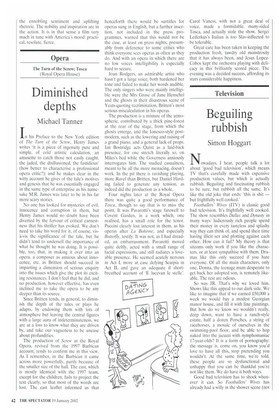 There's no fat in Black Hawk Down. Everything's lean: lean actors, lean plot, lean script. Here's Tom Sizemore, a colonel in charge of a small convoy under heavy fire in Mogadishu, pulling a dead soldier out of the driver's seat of a Humvee and ordering a bleeding sergeant to take his place:

'Get into that truck and drive.'

'Everybody's shot. Get in and drive.'

Terrific. The best kind of screenwriting — raw, muscular. the American spirit in six words (by Ken Nolan). Peggy Noonan, the Reagan/Bush wordsmith, picked up on that line and devoted her Wall Street Journal column to its metaphoric power post-11 September, Black Hawk Down is a movie for the times, and almost an act of redemption for its producer Jerry Bruckheimer and director Ridley Scott after such historical travesties, PC idiocies and flyboy fluffiness as Pearl Harbor (Bruckheimer), GI Jane (Scott) and Top Gun (Bruckheimer with Scott's brother Tony).

It's 3 October 1993, Somalia. Remember that? Most of us can't quite recall what America was doing there, but we know some number of Special Forces died, their bodies dragged through the streets by the gleeful conscripts of General Aideed, the hotshot warlord do jour. Bill Clinton ordered a withdrawal of American forces, and the whole episode went down as a 'failure' — according to taste, either a disastrous intervention in a territory in which the US had no interest, or proof that America was soft and weak and had no stomach for body bags. We know what con elusion Osarna bin Laden drew. A journalist, Mark Bowden, started mooching around in the subject and discovered that the public's perception of the mission — a horrible fiasco — was completely wrong. There was, not for the first time, a failure of political will, but the military were heroic. If Somalia was an example of political weakness, this operation was also a demonstration of military strength.

The Rangers and Delta Force were there to help prevent famine by securing supply routes against General Aideed's thugs. Their mission that day was to kidnap a bunch of the General's lieutenants who were holding a meeting downtown. This they did, but two helicopters were shot down. The Rangers pride themselves on never leaving a comrade to fall into the hands of the enemy, and so they stayed in the city to search for and rescue survivors. It was a story of bravery and loyalty that Bowden felt deserved to be told. His book was a bestseller but not an obvious candidate for Hollywood, given that it's at odds with people's preconception of the event.

At first, you're not sure Scott can pull it off. Helicopters sail over glistening sand and for a moment we hover on the brink of the prettification — the photographic flower-arranging — that so disfigured Hannibal. It's an external shot, too composed, too aware to get inside the subject — in the way that all the poets and novelists hired by glossy mags to write something arty about 11 September have been colossal flops, next to the straightforward account of a fireman or secretary. But Scott pulls himself together, and henceforth it's all business. It's almost as if he feels duty bound to match the men's dogged, defiant, improvisational professionalism. No birds, no honking, no backstory: Bowden's book tells us about these men's early lives and loves. Scott relies on the shorthand of casting — laconic Sam Shepard, idealistic Josh Hartnett, eager Ewan McGregor. The actors establish their identities in the early scenes and then submerge themselves in the unit. Once the battle starts there's little dialogue that isn't armyspeak barked into receivers (just as well, in the case of McGregor, whose accent is a little unreliable).

In one of the film's few departures from reality, Scott put name tags on the Ranger helmets because otherwise they'd be hard to tell apart in the battle scenes. But that's okay: the cast understands that the film's real star is the operation and that confusion about who's who is part of the story. A 16-hour all-night battle compressed into two and a half hours, Black Hawk Down does a brilliant job of placing you inside the heart of the event and plugging you into the rhythm of battle. Scott pulls off an extraordinary technical achievement: as the operation starts to unravel, the film becomes more vivid, unrelenting, intense, adversity heightening the reality. There's none of those Private Ryan interludes with the ennobling sentiment and uplifting rhetoric. The nobility and inspiration are in the action. It is in that sense a film very much in tune with America's mood: practical, resolute, fierce.