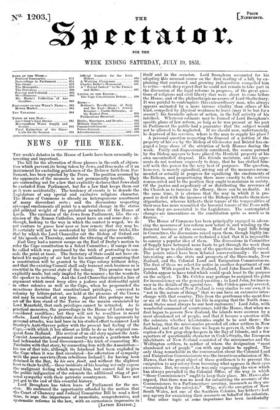 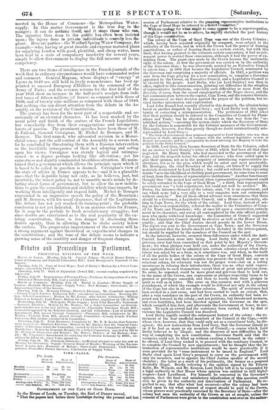 - The bill for the alteration of those phrases in the oath of abjura- tion which preVent.its being taken by Jews, and thus make of it an instrinnent for excluding gentlemen of the Hebrew faith from Par- liament, has been rejected by the Peers. The position assumed by the opponents of the measure is not permanently tenable. They are contending not for a law that explicitly declares that Jews shall he excluded from Parliament, but for a law that keeps them out as it were accidentally. The tendency of events is to denude the Legislature of any special and exclusive religious character. The House of Commons is already an heterogeneous assortment of many discordant sects ; and the discussions respecting episcopal emoluments all point to a material change in the status and political weight of the prelatical members of the House of Lords. The exclusion of the Jews from Parliament, like the ex- elusion of the Roman Catholics, must have an end some day ; al- thOugh, looking to the way in which the contest is waged, we do not venture to guess how near or how remote that day may be. It certainly will not be accelerated by little nisi-prius tricks, like that by which the Lord Chancellor cut the Bishop of Oxford out of his speech on Thursday, amidst the tittering of the assembly. Earl Grey had a narrow escape on the Earl of Derby's motion to refer the Cape constitution to a Select Oommittee ; if escape it can be called which was purchased by the trick of pretending to con- cede the point at issue. The Secretary of State could not have ob- tained his majority of six but for his semblance of promising that a. constitution will be granted to the Cape colony without delay, and that the existing Council shall only transact such business as is essesitial in the present state of the colony. This promise was not explicitly made, but only implied by the manner ; for the words fix the speaker to nothing. And the Lord Chancellor adopted a line of argument which must keep alive a jealous and distrustful spirit in other colonies as well as the Cape, when he propounded the monstrous doctrine that constitutional privileges, conveyed to colonies by letters-patent, are held at the pleasure of the Crown and may be recalled at any time. Against this perhaps may be set off the .firm stand of the Tories on the maxim enunciated by Lord Mansfield, that such privileges cannot be retracted. As to practjeal measures, the proceedings in the House of Lords may be considered reiultless ; but they will not be resultless in moral effect?. . Lord Grey's deliberate desire to injure his opponents by personal attacks, was laid bare in his studied effort to connect Lord StanleY'8 Anti-Slavery policy with the present bad feeling of the Cape,-zrwith,which it has almost as little to do as the original con- quest from Holland. His revival of an old story against the Anti- Convict Association, of personal cruelty towards a gentleman who, had befriended the local Government—his trick of connecting Mr. Fairbairn with that story, by connecting him with the Association— his Use of that tale, although its falsehood had been exploded in the Cape when it was firet circulated—his affectation of sympathy with the roe convicts (from rebellious Ireland!) for having been detained in the Bay, by his own fault, and without the slightest hurt to•their-health,—these incidents of his bearing not only expose the' malignant feeling which moved him, but cannot fail to give the public indignation of the colonists the additional sting of per- sonal sympathy with their patriotic countryman. We have not yet got to the end of this eventful history.

Lord Brougham has taken leave of Parliament for the ses- sion. He embraced the opportunity afforded by the motion that the Court of Chancery and Judicial Committee Bill be read a first ttine, to urge the importance of immediate, comprehensive, and rptematie reforms in the law, with an earnestness impressive in

itself and in the occasion. Lon]. Brougham accounted for his adopting this unusual course on the first reading of a bill, by ex- plaining- that continued and growing indisposition compelled hint to retire—with deep regret that he could not remain to take part in the discussion of the legal reforms in progress, of the great ques- tions of religious and civil liberty that were about to come before the House, and of the philanthropic measures of Lord Shaftesbury. It was painful to contemplate this extraordinary man, who always appears animated by a more intense vitality than others of his kind, compelled by physical weakness to leave (may it be but for a season!) his favourite sphere of action, in the full activity of his intellect. Whatever estimate may be formed of Lord Brougham's specific plans of law reform, so long as he was present at his post in Parliament the public had a guarantee that the subject would not be allowed to be neglected. If we should now, unfortunately, be deprived of his services, where is the man to supply his place ?

A personal question respecting the disposal of a portion of the property of his see by the Bishop of Gloucester and Bristol has en- gaged a large share of the attention of both Houses during the week. Fairly and dispassionately considered, the course pursued by the Bishop appears to have placed the Horfield property at his own uncontrolled disposal. His friends maintain and his oppo- nents do not venture expressly to deny, that he has clothed him- self with this power for the very best of purposes. The question, however, is merely episodical, arising out of the measures recom- mended or actually in progress for Equalizing the emoluments of the Bishops, and proportioning them more exactly to the seriices remunerated and to the position they ought to maintain in society. Of, the justice and expedieney of so distributing the revenues of the Church as to increase its efficacy, there can be no doubt. At the same time, it is obvious that the way in which it is pro- posed to deal with the incomes of the Bishops will make them mere stipendiaries, whereas hitherto their tenure of the temporalities of their sees has more resembled the baronial tenure of the Peers with whom they are associated in the Legislature. The contemplated changes are innovations on the constitution quite as much as in finance.

The House of Commons has been principally engaged in advan- cing the measures of law reform now before it, and winding up the financial business of the session. Most of the legal las being in Committee, the discussions raised upon them, though highly im- portant,- are of so minute or technical a kind that it is impossible to convey a popular idea of them. The discussions in Committee of Supply have betrayed more haste to get through the work than desire or hope to elucidate any of the questions incidentally raised. The points raised have been debated conversationally : the most interesting are—the state and prospects of the Slave-trade, New Zealand, and the Colonial Land and Emigration Commissioners. The first of these we select for notice in another department of our journal. With regard to New Zealand, Lord John Russell and Mr. Cobden appear to have tried which could speak least to the purpose on the subject. To Mr. Cobden may perhaps be assigned the palm for inconsistency on the general question ; to Lord John, for inaccu- racy in the details of the special case. Mr. Cobden gravely averred, that as the climate of New Zealand is very similar to our own, it is "not in the nature of things" that we can have an extensive inter- change with that country. This from the gentleman who spent five , or six of the best years of his life in arguing that the North Ame- ricad States must always be our best customers ! Lord John, with wonderful command of countenance, told the House, that when we first began to govern New Zealand, the islands were overrun by a most abandoned set of people, and that it became a question with the colonists whether missionaries ought to be sent there : the fact being, that the missionaries preceded all other settlers in New Zealand ; and that at the time we began to govern it, with the ex- ception of a few grog-shop-keepers in the Bay of Islands, and a few squatters of questionable character in Cook's Straits, the European inhabitants of New Zealand consisted of the missionaries and the Wellington settlers, to neither of whom the designation "most abandoned set of people" can with any justice be applied. The only thing remarkable in the conversation about the Colonial Land and Emigration Commissioners was the incautious admission of Mr. Hawes, that the great object of these gentlemen is to prevent the emigration to any colony from becoming what appears. in their eyes excessive. But, we suspect, he was only expressing the view which has always prevailed in the Colonial Office, of the way in which "those Commissioners" ought to keep their place. Mr. Hawes also argued, that there was no need for submitting the accounts of the Commissioners to a Parliamentary scrutiny, inasmuch as they Aare "scrutinized by the colonists." 'Why, with the exception of New South Wales, not one of the Southern Colonies has hitherto had any agency for examining their accounts on behalf of the colonists.

One other topic of some importance has been _ incidentally

mooted in the House of Commons—the Metropolitan Water- supply. In this matter Government is the true dog in tte manger ; it can do notbieg itself; and it stops those who eon. The injustice thus done- to the public has often been insisted upon ; the injury done to private individual,' is scarcely less liar grant. Here are parties—the Watford Spring Water Company, Mr- example—who, having at great trouble and expense matured plans for supplying London with good, plentiful, and cheap water, have been kept in a state of compulsory inactivity for several years, simply to allow Government to display the full measure of its in- competency.