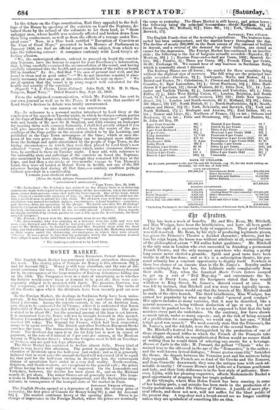 The English Stock Market has continued without animation throughout the week. The closing price of Consols for Money is this afternoon 961 1, and for Account 9644. Money is still very abundant, and the rate of dis- count continues the same. On Tuesday there was an extraordinary demand for it, in consequence of the large number of Railway debentures falling due on the 15th. The Companies were in a state of uncertainty as to whether the holders would renew them or demand to be paid off; they were con- sequently obliged to be prepared with funds. The pressure, however, was but temporary, and it has entirely ceased with the occasion. The books of all the Stocks upon which the dividends have been recently paid are now open.

In the Foreign Market, the dealings in Sardinian Scrip have been unim- portant. It has fluctuated from 1 discount to par, and closes this afternoon about 1 discount. Among the reports current, is one of an Austrian loan, now about to be contracted for in Vienna ; where it is understood that Baron Rothschild of Paris has proceeded with a view to this operation. The price is stated to be about 80; but the nominal amount of the loan is not known. It is understood that the Bonds will not be brought forward in this market. Russian Four-and-a-half per Cent Stock is again firmer ; the price having reached 101 today. The demand for France, which had been suspended, seems to be again revived. The Danish and other Northern European Stocks continue the same. The transactions in Mexican Stock have been insigni- ficant. The dividend due upon it on the 1st July last is now in course of payment, at the rate of 3 instead of 5 per cent per annum, at the Mexican Agency in Winchester Street ; where the Coupons must be left on Tuesdays or Fridays, and are paid ten days afterwards. The Share Market has continued to decline almost daily. Every kind of Share is very heavy this afternoon. The period is approaching for the de- claration of dividends upon the half-year just ended; and as it is generally believed that in most cases the amount declared will not exceed (if it be equal to) that paid for the half-year ending in December hist, the extravagant visions of speculation have ended in a very dull reality. North-western, Brighton, and South-western, are exceptions to the general rule ; the prices of these having been well supported or improved. On the Lancashire and Yorkshire, however, the decline has been about 31., and on the Midland nearly 51. per shiire. The minor Shares are all generally lower. The trans- actions inF'rench Shares have been unimportant, and the fluctuations insig- nificant, in consequence of the tranquil state of the market in Paris.

The English Stocks opened at a depression of 1 upon the closing price of yesterday, the first price of Consols for Money being 961 4, and for Account 961 1. The market continues heavy at the opening price. There is no change of importance in the Foreign Market, where the prices are nominally the following being fite p c transnelidna—Igrettl , 164 4; iar rket ll tis sti heayy„ "qes lower ;

the same as yesterday.. ,The

which is nominally about 1 discount. .