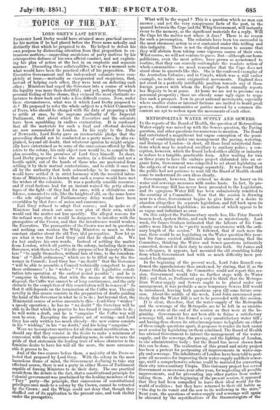 PROBABLY Lord Derby. would have attained •more practieal success for his motion if be had placed before the Peers more nakedly and distinctly that which he proposed to do. He helped to defeat his own purpose by distracting attention from that proposition to ex- traneous matters,—suggesting suspicions of party motives by his retrospective defence of his own official conduct, and not explain- ing his plan of action at• the last in an emphatie and separate manner. Discarding these collateralities, let us fOr a'moment note what would have been the practical effect of his propoSitiOn. The Executive Government and the independent colonists *ere com- pletely at issue,—mutually so exasperated and suspicious, that, instead of helping each other, they were bent on defeating each other ; Ministers had urged the Govereor into a course of which the legality was more than doubtful ; and yet, perhaps through a personal feeling of false shame, they evincea the most obstinate re- luctance to draw back and take a less difficult course. Now, under these circumstances, what was it which Lord Derby proposed to do ? He proposed to refer the whole subject.to A Select Committee of Peers, who should be charged with the duty of preparing a bill to settle at once, by the supreme ,anthority of the Imperial Parliament, that about which the Executive and the colonists have been squabbling in endless contestation. It is confessed that all the materials for such a final and effectual decision are now aocumulated in London. In his reply to the Duke of Newcastle, Lord Derby gave an irretractable pledge that the proceeding should not be conducted as a party move ; he also ex- plained, beyond all doubt, that whatever opinion he might origin- ally have entertained as to some of the concessions offered by Min- isters to the colony, his only object now would be, to complete the plan according to the promises of Lord Grey himself. In short, Lord Derby proposed to take the matter, in a friendly and not a hostile spirit, out of the hands of those who are prevented from settling it by their mutual contestations, and to settle it once for all by the authority that both acknowledge to be supreme ; he would have settled it in strict harmony with the recorded inten- tions of Ministers ; it is known that such a course would have met the wishes of the colonists. It was a perfectly sensible recourse ; and if rival factions had for an instant waived the petty advan- tages of the fight—if they had for once, with a chivalrous con- fidence, consented to ride, like the knights of old, on the same horse —the sole objection of Parliamentary delay would have been overridden by that force of union and concurrence. Earl Grey refused to adopt that course ; and he spoke as if Ministers had struck out some new plan of their own, which would end the matter not less speedily. The alleged reasons for the refusal were, that it would be dangerous to interfere with the prerogative of the Crown, and that the interference would weaken the Executive. The prerogative of the Crown was not in question ; and nothing can weaken the Whig Ministers so much as their constant chatter about the old Tory idol prerogative. Now let us see what it was that Lord Grey said that he should do. We do but analyze his own words. Instead of settling the matter from London, which all parties in the colony, including their own Governor, wish them to do, " it is the purpose of her Majesty's Minis- ters" "to apply themselves, without loss of time, to the considera- tion '. of "draft ordinances," which are to be filled up by the Go- vernor in Council ; Lord Grey has "no doubt" that the Governor "will be able to assemble a Council technically competent to pass those ordinances " ; he " wishes " "to put the legislative consti- tution into operation at the earliest period possible "; and he is "sanguine in thinking, that with the means at the Governor's disposal, the Caftie war cannot be of long continuance, and the only obstacle to the completion of this constitution will be removed." So that it still depends on the termination of the Caffre war. The only novelty in this course consists in the preparation of drafts guiding the hand of the Governor in what he is to do ; but beyond that, the Ministerial course of action amounts to this—Lord Grey " wishes " a speedy operation ; he has no "no doubt" the Governor will be able to do that which in practice he has found it impossible to do ; he will write a draft, and he is " sanguine " the Caffre war will soon be over. Excepting the positive act of writing—and Lord Grey has only written too much already—the new course consists in his " wishing," in his "no doubt," and his being "sanguine."

• Were we to conjecture motives for all this small mystification, we should say that they consist in the desire to make a minimum of concession with the appearance of making none, in order to save the pride of that statesman the leading trait of whose character is the feminine desire to have his will all the more, the more unreason- able it proves to be.

And of the two courses before them, a majority of the Peers se- lected that proposed by Lord Grey. With the colony in the most hazardous frame of mind, the Government declining to take any effectual course, there is not a party in either House of Parliament capable of forcing Ministers to do their duty. The one practical result from the debate is the fact, that a constitutional principle for Colonial government was proclaimed by the leading members of the " Tory " party—the principle, that concessions of constitutional privileges once made to a colony by the Crown, cannot be retracted by. the Crown: and the Whigs could not deny that, though they shuflied out of its application to the present case, and took shelter under the prerogative.

What will be the sequel ? This is a question which no man can answer ; and yet. the very conspicuous facts of the past, in the quarrel between the Cape and the Whig Government, will instantly recur to the memory, as the significant materials for a reply. Will the Cape let the matter rest where it does? There is no reason for such a presumption. The colonists have been too successful in the most strenuous action to rest contented under this trifling and this indignity. There is not the slightest reason to assume that they will abstain from taking some vigorous course of their own. What course, we will not venture to guess. But—although our home politicians, even the most active, have grown so accustomed to routine, that they can scarcely contemplate the resolute action of whole communities—we must remember that the Cape does not stand alone in quarrels like this. She is the confessed exemplar of the Australian Colonies ; and in Canada, which was a still earlier example, we notice some enigmatical movements. England does not stand in a perfectly intelligible position towards any of those foreign powers with whom the Royal Speech annually reports her Majesty to be at peace. At home we are not to presume on a perennial prosperity ; there are already some ugly signs to nega- tive such a prospect. Now in great national movements, especially where smaller states or internal factions are incited to beard great powers, distant communities or parties moved by a common dis- content are apt to reckon upon the movements of each other.