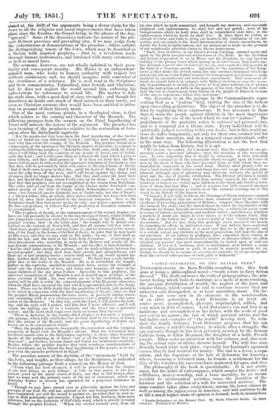 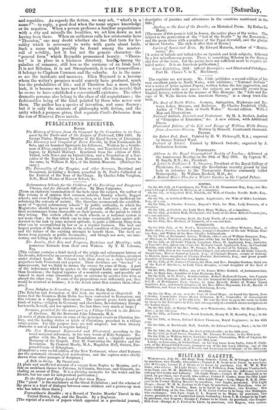 book aims at being a philosophical novel—" truth severe in fairy fiction dressed." The truth embraces the evils of primogeniture, the aris- tocrat feeling which looks to marriage as a mode of moneymaking, the unequal distribution of wealth, the neglect of the poor, and similar things, which cannot be said to continue because they are unknown and disregarded, or at least unwritten about. The fic- tion is not very new in its elements to the novel-readers of an elder generation. Lord Deloraine is an Irish ab- sentee peer ; accomplished, pleasant, unprincipled, selfish, and very much in debt of course. Lord Deloraine's son and heir is as handsome and accomplished as his father, with the seeds of good and evil in his nature, the last of which paternal advice and the bad habits and examples of "the world" develop first. To rein- state the family fortunes, Lord Deloraine proposes that his son should marry a nabob's daughter ; to which, after a struggle, the son consents, though he has been privately married, by the Roman Catholic form, to Ellen Maynard, the daughter of a noble French emigre. Ellen seeks an interview with her seducer, and, discover- ing the actual state of affairs, drowns herself. The wife has acci- dentally heard what took place, especially her husband's agonized excuse that he had married for money. The end is a fever, a sepa- ration, and the departure of the heir of Deloraine for America; where, becoming a reformed man, he founds a settlement for the elite of the tenantry his ancestors have neglected for ages, and dies. The philosophy of the book is questionable. It is not aristo- cracy, but the habit of extravagance, which creates the debts; and selfishness, money-worship, and a loose morality, by no means peculiar to aristocratical societies, cause the desertion of the mistress and the selection of a wife for interested motives. The same conduct takes place everywhere, among the lower classes as well as among the upper, even in America; and will continue to do so till a much higher state of opinion is formed, bothin monarchies

• Castle-Deloraine; or the Ruined Peer. By Maria Priscilla Smith. In three volumes. Published by Bentley.

and republics. As regards the fiction, we may ask, "what's in a name ? "—to reply, a good deal when the name argues knowledge or its negation. When a person professes a familiar acquaintance with a city and miscalls the localities, we set him down as not having been there. When an authoress calls her aristocratic hero "Thornton," one may doubt whether she has that turn for he- raldry which is necessary to write with gusto about lords. Such a name might possibly be found among the muster- roll of nobility, but it has not the generic character—the "general form" which Reynolds pronounced beauty. 'i,Thorn- ton " is in place in a business directory, hardIvitmong the paladins of romance, still less as the surname of an Irish lord. It is not Milesian, it is not Strongbowish, it is not Cromwellian; it belongs to Clapham Common and the suburbs. As is the name so are the incidents and manners. Ellen Maynard is a heroine whom the writer's premises would scarcely have produced, much less the probabilities of life ; and if Thornton has a more likely look, it is because we have met him so very often (in novels) that he seems to have established a conventiontl existence. The other dramatis personae also belong to the class of old acquaintance ; the fashionabIes being of the kind painted by those who never saw them. The author has a species of invention, and some fluency ; but it is only the mixture of philosophy with fiction, and the unity which a purpose gives, that separate Castk-Deloraine from the run of Minerva Press novels.