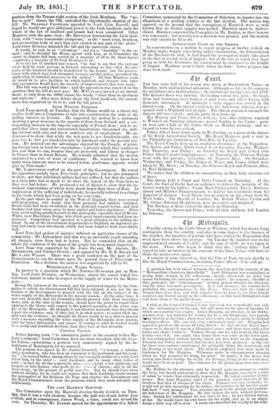 Or Court THE last state ball of the season was

given at Buckingham Palace on Monday, with undiminished splendour. Although so late in the summer, the attendance was multitudinous ; the invitations having exceeded 1700. The Queen's dress was tasteful : the leading colour was pink ; the head- dress and trimmings were formed of pink roses and silver leaves, with diamonds intermixed. At midnight a state supper was served in the dinner-room. On the Queen's return to the ball-room, dancing was re- opened with a Highland reel of eight. The Queen remained amongst the dancers till two o'clock; and the party then broke up.

Her Majesty and Prince Albert, with the four elder children, repaired to Windsor on Saturday afternoon ; passed Sunday at the Castle ; spent an hour and a half at the Cattle Show on Monday morning ; and re- turned to town by two o'clock.

Prince Albert went down again on Wednesday, as a guest at the dinner of the Royal Agricultural Society. His Royal Highness paid a visit to the Philanthropic Institution, at Red Hill, on Tuesday. The Royal Family keep up an assiduous attendance at the Exposition. The Queen and Prince Albert visited it on Saturday, Tuesday, Wednes- day, Thursday, and Friday ; on Saturday the Royal pair looked over Prime Albert's model lodginghou.ses; on Thursday, the Princess Helena went with her parents ; yesterday, the l'rineess Alice. On Saturday, Wednesday, and Friday, the Prince of Wales and Prince Alfred were taken by Mr. Birch ; on Tuesday, the Princess Royal and Princess Alice, by Miss Hildyard.

We notice that the children are unremitting in their daily exercise out of doors.

The Queen held a Court and Privy Council on Thursday. At the Court, the Earl of Derby had an audience, to deliver the insignia of the Garter worn by his father ; Count Buol-Schauenstein, Envoy Extraor- dinary and Minister Plenipotentiary, to deliver his credentials from the Emperor of Austria. Lord Harris was presented, on his return from the West Indies. The Sheriffs of London, Mr. Robert Walter Carden and Mr. George Edmund Hodgkinson, were presented, and knighted. The Duchess of Kent visited the Queen on Thursday.

Yesterday, the Queen and Prince, with all their children, left Landon for Osborne.