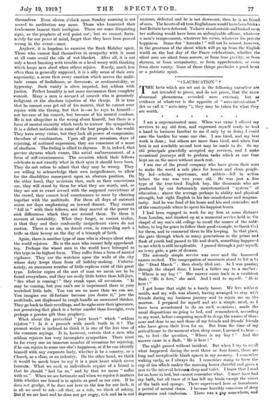 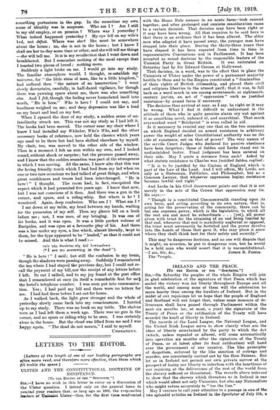 THE facts which are set out in the following narrative are not intended to prove, and do not prove, that the more abnormal phenomena recorded were external; but as evidence of whatever is the opposite of " auto-intoxication " (let us call it " auto-iatry "), they may be taken for what they are worth.

I am a superannuated man. When war came I offered my services to my old firm, and expressed myself ready to lend a hand in business familiar to me if only by so doing I could ease the burden for some one else. I am tired, and my best work is done ; but others are more than tired, and when first best is not available second best may be made to do. So my old principals gracefully accepted my services, and I make occasional journeys still to perform tasks which at one time kept me on the move without much rest.

to make the world a safe place for honest and clean people. My lad—scholar, sportsman, and athlete—fell in action before the war was two years old. He was just a fine type of the true-bred English boy, like thousands who are produced by our fortunately unsystematized " system " of education ; above the average perhaps in ability and physical strength, but right English in his fair-mindedness and magnan- imity. And he was fond of his home and kin and comrades, and of the countryside where he spent his happiest hours.

I had been engaged in work for my firm at some distance from London, and finished up at a memorial service held in the chapel of my son's old college to recall the names of the nobl- fallen, to beg for grace to follow their good example, to thank Col for them, and to commend them to His keeping. In that place, the gate through which so many generations in the prime and flush of youth had passed to life and death, something happened to me which is still inexplicable. I passed through a gate myself, an ivory gate, a gate of dreams.

The solemnly simple service was over and the honoured

names recited. The congregation of mourners stood to list^n t3 the " Dead March " ; then slowly filed out. As I was passing through the chapel door, I heard a father say to a mother : " Where is my boy ? " Her answer came back in a confident flash : "He is here," she said. And I said to myself: " Ile is here ! "

I got home that night to a lonely house. We live without

maids, and my wife was absent, having arranged to stay wi friends during my business journey and to rejoin me on the morrow. I prepared for myself and ate a simple meal, as I have been accustomed to do on such occasions ; made the usual dispositions on going to bed, and remembered, according to my wont, before composing myself to sleep, the names of tho33 near and dear to me and those of my friends and friends' friends who have given their lives for us. But from the time of my arrival home to the moment when sleep came, I seemed to hear— no, to feel—the question, " Where is my boy ? " And the answer came in a flash, " He is here ! "

The night passed without incident. But when I try to recall

what happened during the next three or four hours, there are long and inexplicable blank spaces in my memory. I remember waking early, as I always do. I remember rising to brew the cup of tea which makes the morning hours cheerful and gives a zest to the inter.-al betweea sleep and toilet. I know that I read for an hour in bed, but cannot remember what. I must have had nay bath, but all trace of it has left my brain except the vision of the bath and sponge. There supervened here or hereabouts a period of mental chaos. I became horribly conscious of deep depression and confusion. There was a gap somewhere, and something portentous in the gap. In the meantime my own sense of identity was in suspense. Who am I I Am I still in my old employ, or on pension ? Where was I yesterday ? What indeed happened yesterday ? My eye fell on my wife's bed, not &fait. Where was she.? She must be somewhere about the house ; no, she is not in the house ; but I know I shall see her to-day some time or other, and she will tell me things —she will tell me. It is in my recollection that I went down and breakfasted. But I remember nothing of the meal except that I toasted two pieces of bread ; nothing more. Suddenly a light broke on me. I would go into my study. The familiar atmosphere would, I thought, re-establish my universe, for "the little state of man, like to a little kingdom," had suffered then " the nature of an insurrection." I went slowly downstairs, carefully, in half-dazed vigilance, for though there was yawning space about me, there was also something else. And I felt, though the feeling never formulated itself into words, "He is here." Who is here ? I could not say, and loneliness weighed on me; and deep depression was hie a load on my heart and lead on my feet.

When I opened the door of my study, a sudden sense of un- familiarity struck me. This was not my study as I had left it. The books had been moved. The corner near my chair where I know I had installed my Whitaker, Who's Who, and the other necessary books of reference, now held the classics which years ago used to be there but had been shifted elsewhere by myself. My chair, too, was moved to the other side of the window. Then in a moment I felt an arm within my own, and I looked round, without shock or surprise; but the pressure passed away, and I knew that the sudden sensation was part of the strangeness in which I was moving. All the same, I knew also that this was the loving friendly touch which I had had from my lad when on one or two rare occasions we had talked of great things, and when great confidences and trusts had been interchanged. " He is here ! " I thought. The room had, in fact, reacquired the aspect which it had presented five years ago. I know that now, but I was not conscious of it then. And there was a gun in the corner, and spurs, and a riding-whip. But where is he ? I wondered. Again, deep confusion. Who am I ? What am I I sat down at my table, my head between my hands, waiting for the possession of my self. Then my glance fell on a book before me ; not, I was sure, of my bringing. It was one of his books, and it was open. It was a little pocket volume of Euripides, and was open at a favourite play of his. And there was a line under my eyes, a line which, almost literally, leapt to them, for the type appeared to be " leaded," so that it could not be missed. And this is what I read :- robs yip Oavarras oDX bpiB Xuroty.dvotrs

" He is here ! " I said ; but still the confusion in my brain, though the shadows were passing away. Suddenly I remembered the inn where I had stayed the previous day, but I could not re- call the payment of my bill, nor the receipt of any letters before I left. So out I sallied, and to my joy found at the post office that I remembered at once (in itself a remarkable feat for me), the hotel's telephone number. I was soon put into communica- tion. Yes ; I had paid my bill and there were no letters for me. I had had them before I set out for home.

As I walked back, the light grew stronger and the whole of yesterday slowly came back into my consciousness. I hurried up to my study. There was no book on my table. The shelves were as I had left them a week ago. There was no gun in the corner, and no spurs or riding-whip to be seen. I was certainly alone in the house. But the cloud was lifted from me and I was happy again. " The dead do not mourn," I said to myself.