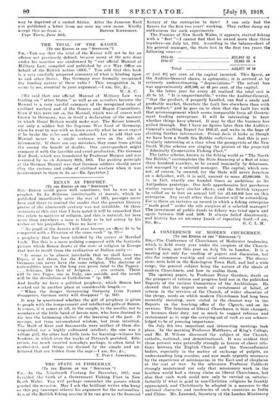 THE TRIAL OF THE KAISER.

ITo THE EDITOR OF THE " SPECTATOR."1 Sia,—You say that the trial of the Kaiser will not be for an offence not previously defined, because many of the acts done under his sanction are condemned by our official Manual of Military Law, compiled and published by our War Office on behalf of the British nation (1914)." You add that this book is a very carefully prepared summary of what is binding upon us and other States. Has Germany ever formally recognized the binding nature of these rules ? This recognition is, it seems to me, essential to your argument.—I am, Sir, Sic.,

[We said that our official Manual of Military Law was binding on " other States " as well as on ourselves because the Manual is a very careful summary of the recognized rules of civilized warfare and of the Geneva and Hague Conventions. EVen if this were not so, the Manual, which was of course well known to Germany, was in itself a declaration of the manlier in which Great Britain would make war. The Kaiser himself, not only a soldier but the Supreme War Lord of Germany, when he went to war with us knew exactly what he must expect if he broke the rules and was defeated. Let us add that our Manual never in a single sentence errs on the side of inhumanity. If there are any mistakes, they come from giving the enemy the benefit of doubts. Our correspondent might compare it with the horrible and cruel production, The German War Book, which was translated by Professor Morgan and was reviewed by us on January 30th, 1915. The guiding principle of the German Manual was that German soldiers should never obey the customs and rules of civilized warfare when it was inconvenient to them to do so.—En. Spectator.]